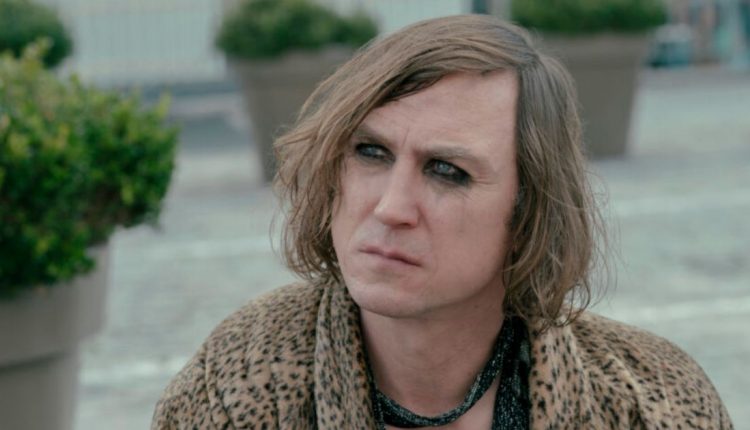 Lars Eidinger is a different breed of actor. Incredibly thoughtful and philosophical, bracingly confrontational, and physically intimidating, Eidinger is a difficult person to pin down, largely because his performative presence changes with such fluidity (from legendary Shakespeare performances to perfect and odd indie movies like Everyone Else, and mainstream dramas like the upcoming All the Light We Cannot See). The media often likes to present Eidinger as a kind of enfant terrible, a mischievous actor probing the very limits of acceptability and dissecting static definitions of acting. For instance, The Guardian went out of their way to chronicle some of his more radical gestures on stage:

For productions at the Schaubühne, he has urinated into a sink on stage, pushed sausages up his behind and, in Ostermeier’s A Midsummer Night’s Dream, ventriloquized Puck’s monologue through his penis […] When his Hamlet reached London in 2011, Eidinger’s Dane wandered into the auditorium and ripped up a critic’s notepad.

While Eidinger can certainly be provocative in his performances and has undoubtedly ruffled the feathers of stuffy establishment critics and elitists in the industry, it would be a serious mistake to isolate these moments from his career as ‘provocation for provocation’s sake’ and to confuse the artist with a few of his more headline-grabbing performances. In fact, Eidinger is so much more than the “anarchic German actor” publications like The Globe and Mail like to classify him as. He’s an incredibly complex, subtle, funny, and iconoclastic performer, something which can be seen front in center in the fantastic new HBO series Irma Vep.

“If you would meet me in person, privately, you would be surprised that I’m really a friendly person, so I’m kind of the opposite of Gottfried, really,” Eidinger tells us in a soft-spoken, careful way. Gottfried is one of the most dynamic, hilarious, and fascinating characters in writer-director Olivier Assayas’ unique new project, and it would be understandable for audiences to confuse Gottfried in Irma Vep for a parodic exaggeration or caricature of Eidinger’s actual self. Irma Vep is, after all, all about movies (depicting, as it does, the production of a fictional remake of the Feuillade classic Les Vampires), so it’s fitting that this next-level-meta series would play with its actors’ identities.

Gottfried is an over-the-top actor in Irma Vep, extremely confrontational and at times antagonistic, a kind of aimless provocateur who wanders through life as much as he does roles, sexual partners, drugs, and political beliefs. Vaping incessantly, smoking crack in his dressing room, perpetually made up with thick black eyeliner, and cracking politically incorrect jokes at every opportunity, Gottfried is a ridiculous, incredible character, and Eidinger completely masters the performance. He vamps his way throughout the series, often stealing scenes from great actors like Alicia Vikander (who plays an actor taking on the role of Irma Vep) by way of his mere magnetism.

It may be meta (the ‘bad boy’ actor playing the ‘bad boy’ actor), but Eidinger thinks it’s based less around him than it is a reflection of Assayas (or aspects of the director) himself. “Olivier is always very interested in the meta level, so this is what all his work involves. What fascinated me,” Eidinger says, “if you see Irma Vep, it’s about Olivier’s personality — it’s always a portrait of himself.” He calls Irma Vep a “very brave performance,” in that Olivier Assayas exposes his soul (the director’s career, his desires, his marriage and divorce, and so on). The actor continues:

So I can do my part, but I think it’s way more about Olivier than me. I think Gottfried is also a part of Olivier and what Olivier thinks. He’s the most intelligent person I’ve ever met in my life, he’s so complex, and this allows him to be an extreme ambivalent character, and one type of his person is Gottfried. It’s not just Gottfried, of course, but there’s part of Gottfried in Olivier. It’s a bit like the fool character in a Shakespeare drama. The fool is always allowed to say the truth because he’s a fool, he can say it and people don’t blame him for it. So [Olivier Assayas] allows Gottfried to say things that maybe, in one part of his mind, he has the same opinion, but he would never say it in this extreme way, because he’s too clever.

Ultimately, somebody had to play this “part of his mind” in Irma Vep, and Assays knows Eidinger well. They’ve worked on several films, most notably Clouds of Sils Maria and Personal Shopper, and it’s safe to say that Assayas knew how perfect Eidinger was for the part, even if Eidinger as a person is very different from this kind of character. That’s because Gottfried and Eidinger share a similar sensibility when it comes to acting.

The particular reason why I play this part, or why he called me and offered me the part, is because this is in a way my ideal of acting, to have something unpredictable. For me, I always want to play like an animal. My way of acting, I want to be unpredictable, and I always try to follow my instinct. […] What I don’t want is to perform something that I had in mind when I went to set. There’s a really nice quote from the Brecht actress Helene Weigel. She said, ‘if you have an idea, forget it.’ So I don’t want to have any ideas. I don’t want to come up with something. It’s just about the moment, it’s just about the relation to the partner, the reaction of the atmosphere that I’m surrounded by. It’s really animal-like and more instinctive.

Eidinger’s acting ‘style’ is almost anti-style itself, similar to his character Gottfried. Of course, there is immense skill and talent in his performances, but it’s almost as if Eidinger doesn’t trust professionalism or consistency. “The way I was educated in acting school,” Eidinger says, “was that you rehearse something, and then you perform it in the future, but it’s something that you rehearsed in the past. So I always have the feeling, why should something that we did in the past have a quality in the present?”

Lars Eidinger on Presence and Provocation

This is the essence of what makes Eidinger such a dynamic, fascinating, and underrated actor, and consequently what makes his performance in Irma Vep so utterly memorable. He has an almost dangerous unpredictability, totally existing in the present moment but tempered by a deep understanding of the human condition which allows him to recognize the most truthful or powerful way to perform at that exact moment. “I think as an actor, you always have to come up with something that is necessary for the very moment, so my interpretation or my idea of presence is something which barely happens, which I think not that many actors are doing.” Eidinger continues:

The only reason why I interact with the audience, or why it provides the theater is because I want them I want the audience to feel that it happened in this very moment. This is what describes presence, and this is why I think most of the actors in theater are not present, because they just repeat something that they rehearsed in the past. And this is also something I tried to do in front of the camera to make decisions in the very moment and follow them, this is what I mean with instinct. And that gives me certain kinds of presence.

Sometimes, this kind of presence leads to radical, antagonistic, or provocative moments with an audience. “I never try to be provocative in any way,” Eidinger says, which in itself might seem like an ironically provocative statement. “I like the word ‘provoke.’ Prōvocāre, it’s a Latin word, and it means ‘to make the other one react.’ In Germany, the word for ‘entertainment’ is unterhaltung, which is the same word for ‘dialogue’ or ‘to communicate.’ And what I want to provoke is to get into a dialogue with the spectators, but I don’t want to provoke for the sake of provocation, to do something radical or go over boundaries; this is not my aim, ever.”

Finding Truth in Failure on the Set of Irma Vep

The aim, instead, is truth. As Eidinger says:

I think it’s way more about something else: being as truthful as possible to the moment. Maybe that makes it appear radical, but no, this is not something I’m aiming for. The problem of provocation in the way of a negative context is that it leads to a distance, and I think that’s the opposite of what I want to achieve. I want to achieve complete commitment or identification with the people. I want them to discover themselves in my performance. It’s never about me, it’s always about them. It’s only a good performance if I managed to mirror the spectator.

There’s a concurrence between Eidinger’s performances and Assayas’ films in that they reflect humanity, warts and all. Their art is messy, personal, and reflective of the cultural moments; there are no heroes or villains here, because each character is simply human. “I’m now 46 years old,” Eidinger says, “and I’ve never met a single hero in my life. There are no heroes. Heroes are something that comes out of fictional life. So, we are all antiheroes. The thing that makes the human being the human being is that we make mistakes, that we are filled with failure.”

This is the kind of truthfulness Eidinger yearns to get at when reflecting the spectator; instead of presenting some fictional idealization of the human being (like a superhero), Eidinger reflects the reality of humanity back to the spectator — that we’re not heroes, we’re “creatures full of failure,” Eidinger says. “If you manage to mirror the failures of the people, if they discover their own mistakes in your performance or maybe their way of thinking, then it becomes reflection, and reflection is the only thing that leads to a change. Whenever people are able to reflect on themselves, they can change what they do.”

This idea of failure and mistakes being intrinsically hopeful as a catalyst for change is a powerful one. Eidinger and Assayas seem to agree that it is only through witnessing and reflecting our failures and mistakes that we can change (rather than consuming utopian, feel-good movies about constant heroes) or identify the problems or issues in ourselves and our society. Eidinger and Assayas are making room for failure. “The beauty of improvisation is that it can lead to that it can lead to failure,” Eidinger says, “and that’s the beauty of it, to take the risk to fail. [Assayas] allows me to fail in front of the camera, and in front of his eyes. And that’s beautiful.”

Call it finding perfection in failure, or call it a radical performative gesture. Whatever it is, what Eidinger and Assayas do together in Irma Vep is one of a kind, radiant, and beautiful. Irma Vep is currently airing Monday nights at 9 pm on HBO and is available to stream on HBO Max.