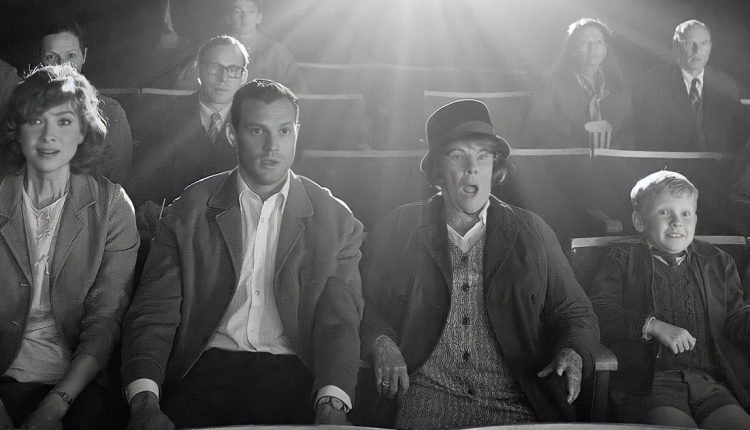 Kenneth Branagh writes and directs a deeply personal recollection of childhood during “The Troubles” in Northern Ireland. Belfast is seen through the eyes of a wistful boy as his world literally explodes into violence all around him. He watches as his beloved family struggles with the religious and ethnic conflict that turned neighbors into bitter enemies. Belfast is exquisitely shot in black and white with fleeting scenes of striking color. It’s a well-acted artistic drama that does suffer from pacing issues.

Belfast takes place initially in the summer of 1969. Buddy (Jude Hill) loves playing on the street with the other children. Ma (Caitríona Balfe) keeps a watchful eye over him and his older brother (Lewis McAskie). Pa (Jamie Dornan) works construction temporarily near London. He comes home every two weeks to his dear family. The separation strains Buddy’s parent’s marriage. But they understand Pa’s lucky to have a job with unemployment rampant.

Buddy’s innocence is shattered when the Catholic homes on his block are targeted by a vicious Protestant mob. He doesn’t understand the cause of the anger. Buddy honestly can’t tell the difference between a Catholic or a Protestant. As the British Army rolls into Belfast, local militias battle to ethnically cleanse neighborhoods. Pa refuses to have his family drawn into the conflict. But the newly elected Protestant “Captain” demands that Pa choose his religion’s side or face dire consequences.

Belfast pulls no punches depicting the hatred that bitterly divided a country. Buddy acts as an honest witness to nationalistic turmoil and its effect on his family. Ma treasures her home. Her entire life has existed within mere blocks. Everything she knows and loves has always been within simple reach. Pa believes they can start anew as long as they have each other. They have a chance to escape the violence when others don’t. Buddy attempts to have a normal childhood with significant familial and external pressures in all directions.

Kenneth Branagh takes the time to show Buddy’s daily routine. This is key to establishing his viewpoint. Belfast somewhat stumbles when this exposition runs too long with the multiple overarching adult themes. The Troubles, marital strife, a schoolgirl crush, his grandparents, there are so many story elements trying to gain traction. Belfast packs a lot of drama into ninety-seven minutes. The result is a pacing slowdown where the film drags. Branagh needed to sharpen the flow of the narrative.

Belfast has amazing cinematography. The film takes a Pleasantville-esque turn with a brilliant use of intermittent color. We see vibrant hues when the characters watch art or music that lifts their spirit. Cinematographer Haris Zambarloukos (Cinderella, Thor) has worked with Kenneth Branagh on many of his films. He’s absolutely masterful here and will be a serious awards contender.

Belfast is a remarkable film to see. It’s by no means a flawless experience, but captures a point in time with creative clarity. Kenneth Branagh succeeds in delivering the poignant experiences of his youth. It also helps to have a great soundtrack of classic sixties hits. Belfast is a production of TKBC and Northern Ireland Screen. It will be released exclusively in theaters on November 12th from Focus Features.

CMAs: T.J. Osborne kisses his boyfriend. Who is Abi Ventura?