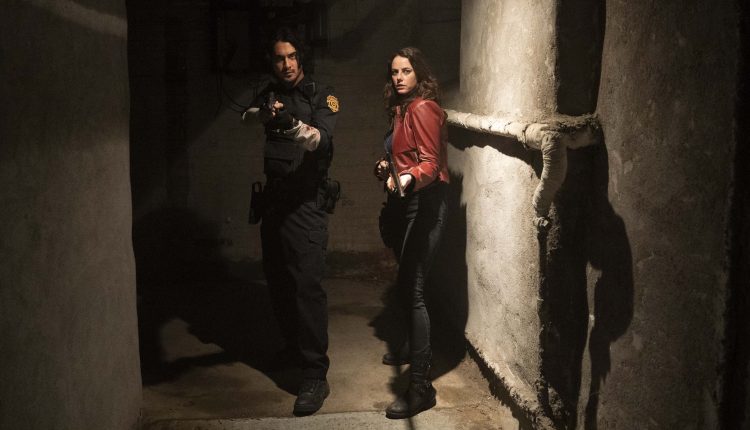 Resident Evil: Welcome to Raccoon City serves as an origin story and reboot of the popular action-horror franchise. The seventh film of the series draws its storyline and characters from the initial Capcom video games. It is red meat for an ardent fan base and genre junkies. The film offers few narrative surprises with a near textbook following of standard horror tropes. But drumroll please, I was moderately entertained from start to finish. Resident Evil: Welcome to Raccoon City has a capable protagonist that makes the most of dropping F-bombs and splattering zombie brains.

The film opens at a Raccoon City orphanage in the mid-eighties. A young Claire Redfield (Lily Gail Reid) sees a deformed girl lurking in the halls at night. Her brother, Chris (Daxton Gujral), tells the creepy Dr. Birkin (Neal McDonough) that his sister sleepwalks and imagined the frightening encounters. Years later on a rainy September 1998 night, Claire (Kaya Scodelario) returns to Raccoon City to warn her brother about the Umbrella Corporation. The pharmaceutical giant is pulling out of the remote town. Chris (Robbie Amell) has nothing to say to his long-lost sibling. Now an RPD officer, he owes his career to Dr. Birkin and the company.

Meanwhile, rookie RPD flunkie Leon (Avan Jogia) is left to man the front desk while the rest of the department investigates bizarre occurrences. Warning sirens blare as the Umbrella Corporation mysteriously locks down anyone from leaving Raccoon City. The separated Redfields, cop teams, and a fleeing Dr. Birkin must fight their way out of an increasingly dangerous situation. The citizens of Raccoon City are transforming into ravenous monsters.

The zombie genre has been beaten into the ground and run over tenfold. In that sense, Resident Evil films are a known commodity. Welcome to Raccoon City thankfully doesn’t try to up the ante or reinvent the zombie wheel. It starts off small and ominous, then builds to depraved flesh-chewing carnage. The film plays out very much like the escalating levels of the games. Familiarity does not breed contempt in this instance. Raccoon City moves at a crisp pace and always feels engaging.

Kaya Scodelario does a banner job headlining creature features. The Maze Runner trilogy and Crawl star deliver cheesy dialogue effortlessly while gunning down gut-munchers. She owns every scene with a fierce demeanor that notches down the silliness factor. This level of gravitas helps to differentiate Welcome to Raccoon City from its predecessors. I look forward to seeing her further adventures as the franchise expands on this new chapter.

A new video claims to know the identities of the mysterious multiverse silhouettes glimpsed during Spider-Man: No Way Home’s finale.

‘It Was in Poor Taste’