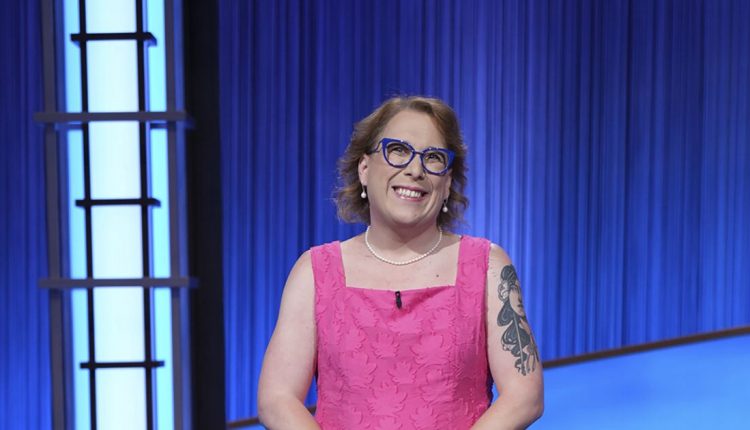 “Jeopardy!” juggernaut Amy Schneider is at it again, this time taking home the grand prize at this year’s Tournament of Champions.

During the sixth game’s Final Jeopardy, Schneider bet $13,000 and submitted the correct response to come out on top with $28,600, beating fellow Season 38 competitor He’s final total of $17,001.

In a statement to People magazine, Schneider said her win felt “amazing.”

“Earlier in the finals, I had this sudden moment of seeing myself and being like, ‘I’m on stage in the Tournament of Champions finals,’ and that was crazy. And I won! It’s a great feeling,” she said.

Schneider’s Tournament of Champions victory comes a year after she made her “Jeopardy!” debut on Nov. 17, 2021. With her first episode, she dethroned He and broke his five-day winning streak. After that, Schneider just kept winning — and making “Jeopardy!” history while doing so.

During her impressive run, Schneider won the most games of any woman or transgender contestant in the show’s long history. “Jeopardy!” host Ken Jennings holds the record for most consecutive victories for any player with his 74-win streak in 2004.

Schneider’s streak came to an end on Jan. 26, 2022, when she lost to Chicago librarian Rhone Talsma.

Schneider’s time might have been cut short, but she told The Times in January that it wasn’t for naught.

“Specifically around the previous trans contestants that have been on — that meant a lot to me to see them and be able to envision myself where they were,” Schneider said.

“I hope it makes it seem possible. … A place that women belong is on that champion’s podium.”

Behind the stunning exit of Disney CEO Bob Chapek