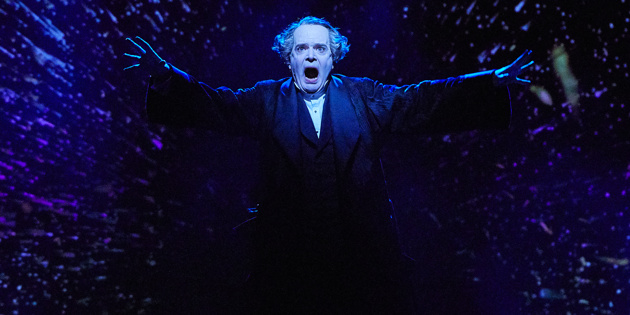 Jefferson Mays in “A Christmas Carol”

Jefferson Mays is bringing the holiday spirit to Broadway with his one-man A Christmas Carol. In this production of the Charles Dickens’ classic story, Mays plays over 50 characters at the Nederlander Theatre. The Tony winner, who took his final bow as Mayor Shinn in The Music Man before beginning A Christmas Carol, sat down with The Broadway Show host Tamsen Fadal at Haswell Green’s to chat about stepping into Victorian London, his hand-written script and more.

Mays is no stranger to playing multiple characters on stage. He won a Tony Award for playing 40 roles in the solo show I Am My Own Wife and garnered another Tony nomination for A Gentleman’s Guide to Love and Murder, in which he played all 10 members of the D’Ysquith family. “I think I’m more frightened and intimidated when I’m with other people because I feel responsible as a team player,” Mays said. “I want to be there to pick up my cue, give them the right line and be present. When you’re on the stage by yourself, you’re responsible only to yourself. I think that takes the burden off of me.”

When it came to preparing for the production, Mays took a unique approach: a hand-written script. “This is A Christmas Carol, it is never apart from me,” he said, holding up a large book. “I just go around with it all the time. I wrote it by hand in pencil. It’s the whole show, and I have to have it with me always so I can consult it. I love walking the streets of Manhattan muttering A Christmas Carol to myself. It’s kind of a memorization technique. I think it’s easier to memorize something when you are in motion, whether it’s walking down a street or, in this case, transcribing it with a pencil on paper. It tends to stick in my mind more. This is Dickens’ own text. It’s his own brutal cut of the unexpurgated manuscript of A Christmas Carol, which takes about three hours to read. But this is down to a lean 90 minutes and it’s Dickens-approved. I don’t shut up for an instant.”

Although Mays is the only actor taking the stage, the audience plays a vital character. “I’m playing 50 characters trying to evoke Victorian London in this wonderful story,” Mays said. “It’s somehow akin to a radio play in which it’s the audience’s imaginations that provides the truly astonishing special effects. It’s a weird kind of hallucinatory experience that I have. I step onto this magic carpet at the beginning, and then it all passes in this, this hallucinatory blur and then it’s over. It’s the fastest 90 minutes I’ve ever spent in my life.”

Watch the video below and head here to check your local listings for The Broadway Show. Hosted by Emmy winner Tamsen Fadal, it is the only nationally syndicated weekly theater news program.

More changes at CNN as top programming executive to leave