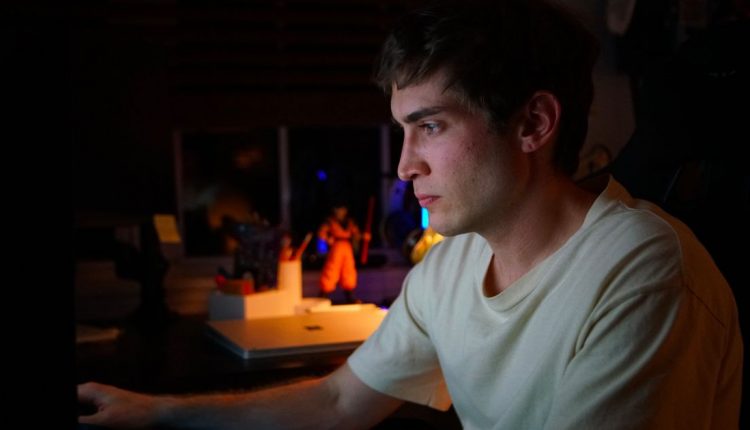 Chuck (Patton Oswalt) is an estranged father, a compulsive liar, and has been blocked by his son Franklin (James Morosini). Chuck’s coworker Jimmy (Lil Rel Howery) tells him to create a fake social media profile to get around being blocked. He does so, copying the profile of Becca (Claudia Sulewski), a waitress at a diner that he frequents. Soon, Chuck’s ploy to communicate with his son turns into full-on catfishing.

Chuck’s romantic interest Erica (Ratchel Dratch) warns him that things will turn out badly. Eventually, Jimmy does too, and hilarity ensues as Franklin becomes determined to meet Becca.

Morosini wrote and directed I Love My Dad, which is based on a true story, winning the Grand Jury Award and Audience Award for Narrative Feature are SXSW 2022. I Love My Dad is in theaters as of August 5, 2022, and available on demand on August 12.

“I love making movies in this way. I was lucky to have collaborators that were willing to let me do all of these things,” commented Morosini, “when I’m doing all of these roles, it allows me to really make the movie exactly the way I want to make it. I’ve been making movies in this way since I was a little kid, and it’s just fun. I love movies where I can tell the filmmaker has skin in the game.”

I Love My Dad is Based on a True Story

“Right on the first page it says, ‘This is a true story,’ so when I started reading, I was immediately grabbed by the whole psychological aspect of it,” commented Dratch when asked about her first impressions of the script. “I also thought it did a great job of being funny and walking the line. That’s sort of in my wheelhouse and what appealed to me.”

I Love My Dad is certainly funny, which builds in tandem with the elements of cringe throughout. As Becca and Franklin’s fake relationship flourishes, there’s plenty of space for Chuck to advance, creating heightened discomfort and big laughs.

“Anytime we can see that somebody is lying, and we know they’re lying, it makes us uncomfortable,” explained Morosini, “whenever we have to lie or be dishonest in our own lives, we’re viscerally uncomfortable, because there’s this fear of being found out. So, I wanted to take that and go to the furthest extent throughout the film. We know Chuck is being dishonest, but we’re also kind of falling in love with this girl that he’s created in the same way that Franklin is, and it creates these conflicting emotions of wanting it to work and hoping that it doesn’t.”

That visceral discomfort is amplified well in the writing of Chuck’s character. Not only does Chuck lie by catfishing his son, but he is shown to have patterns of behavior to lie in chess games to win, which he mirrors in form during text conversations. All of which reinforce funny moments as we seek relief from that discomfort.

“I’ve worked with Patton before, way back on King of Queens. We played this dorky couple which was really fun, so it was fun to work with him again. He’s just so spontaneous… I like the scene where he’s coaching me on the phone, and I don’t even know that I’ve been sort of tricked into this whole scheme that he has,” said Dratch.

I Love My Dad Should be Watched Collectively

“I really hope audiences get a chance to see this in theaters because it’s an experience where everybody’s collectively reacting to it. It was so fun at SXSW and other festivals across the country, to watch this with an audience,” commented Morosini when asked what he’s most excited for audiences to see. “I got to go to the festival, and it was the first movie I’ve been to since the pandemic, and it was really fun to feel that collective squirming and laughing and to have that communal experience,” added Dratch.

As for what audiences should take away from watching, there’s clear questioning throughout of what it means to be a part of a family, commentary on the effects of technology and social media, and what it means to forgive, though, Morosini said he’d leave that all up to the viewer.

“Also, I would say on top of that, it’s very of the now. It’s very topical… We’re watching all of these things, and everyone’s riveted by the swindlers, so I think it sort of brings that whole fascination to a personal level. You couldn’t have this movie several years ago when this wasn’t a thing,” added Dratch.

I Love My Dad comes to us from Magnolia Pictures.

Holds Well On Second Friday, All Eyes On Growth Over The Weekend