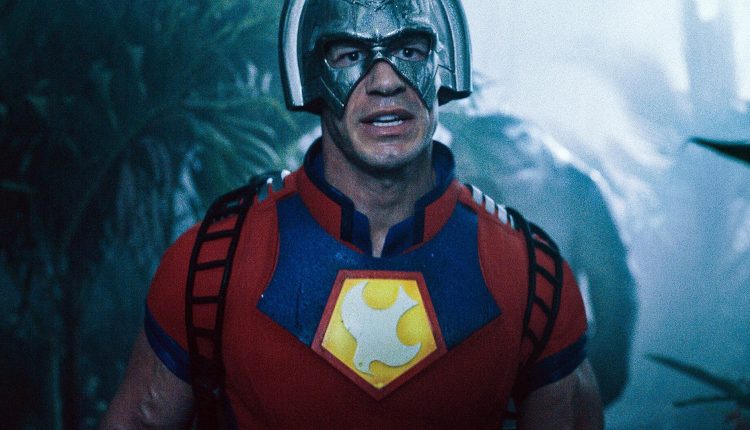 The DC Extended Universe gets a whole lot funnier with the absolutely hilarious Peacemaker. Director/writer James Gunn continues the raunchy and graphically violent slapstick adventures of The Suicide Squad’s unfiltered patriot. He’s still willing to kill to preserve the peace but exhibits surprising regret for his past murderous actions. Peacemaker’s joined by a terrific ensemble of wacky supporting characters. The initial three episodes play out like action-packed skits that introduce the bizarre eccentricities of the cast. There’s little narrative progress. But you get the feeling that needed groundwork is being laid for a big finale.

The series premiere, “A Whole New Whirled”, picks up with Christopher Smith (John Cena) aka Peacemaker, fully recovered from his showdown with Bloodsport. He leaves the town of Evergreen’s hospital remarkably spry for a guy who was “shot in the neck and had a building collapse on him.” He returns to his trailer but gets a rude awakening. Amanda Waller (Viola Davis) isn’t through with him yet. He only served four years of his life sentence. ARGUS agents led by Clemson Murn (Chukwudi Iwuji) need his services for a critical black operation, Project Butterfly.

Peacemaker’s ordered to attend a briefing dinner. He just has to pick up his trusted sidekick, a loving bald eagle aptly named “Eagly”, from his white supremacist, abusive father (Robert Patrick). Peacemaker meets the bad-assed Harcourt (Jennifer Holland) and team tech guru, the schlubby John Economos (Steve Agee). They find Peacemaker to be ridiculous but rose to the top of Amanda Waller’s sh*t list by defying her at the Battle of Corto Maltese. The odd woman out is Leota Adebayo (Danielle Brooks), a bubbly newbie added for tactical support. Her placement on the team causes great suspicion from the hardened veterans.

Peacemaker’s copulation quest gives him the first taste of the enemy. The next two episodes, “Best Friends, For Never” and “Better Goff Dead”, has ARGUS picking up the pieces from Peacemaker’s raging libido and fondness for eighties glam rock music. He starts to bond with Harcourt and Leota while truly aggravating Clemson and John. Preparation for their first mission gets hampered by interruptions from Vigilante (Adrian Chase), Peacemaker’s wannabe bestie, meddling cops, and startling reveals about his father and a team member. The distractions pale in comparison when Peacemaker discovers the meaning and scope of Project Butterfly.

The laugh-out-loud opening dance sequence sets the stage for a wild ride. Peacemaker revels in being naughty. It’s gleefully politically incorrect, loaded with gratuitous sex, rampant swearing, and bloody carnage. James Gunn (Guardians of the Galaxy, The Suicide Squad) uses the characters’ extreme ideologies to satirize right-wing elements in society. Leota is a liberal lesbian who offers an alternative worldview. She provides an equally funny counterbalance to Peacemaker’s righteous aggression.

John Cena gives it his all and succeeds grandly. We already know that Peacemaker is a tactless, adept killer with a fondness for tighty-whities. He killed Rick Flagg, thus proving his unquestioned loyalty and ability to follow orders. The deed cracked his iron facade. The series, in a brilliantly humorous way, has Peacemaker questioning his resolve. We see how his racist and domineering father molded his personality. Then trained and equipped him to fight for their brand of justice. Peacemaker wonders if he’s serving good or just another homicidal maniac in a goofy costume.

Peacemaker’s slow-burn approach to story details gives ample time to character exposition. What we learn at the end of episode three could have easily been done in the premiere. The delay allows a critical understanding of the players and their motivations. There’s quite a bit of nuance here. James Gunn establishes affinity for the cast before the curveballs to come. Peacemaker is meant for mature audiences in every sense. Steer children clear from this superhero. New episodes will be released every Thursday on HBO Max until February 17th. Culminating in an eight-episode first season. Stick around for additional hijinks after each week’s credits. Peacemaker is a production of The Safran Company, Troll Court Entertainment, DC Entertainment, and Warner Bros.

Tales of The Walking Dead Starts Filming Next Week in Georgia

10 of the Best British TV Shows of All Time