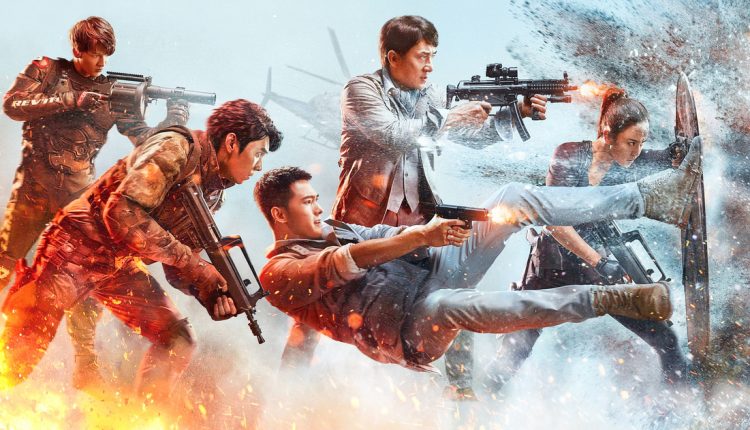 Jackie Chan and longtime collaborator Stanley Tong strike out miserably in their seventh film together. Vanguard is a bumbling CGI spectacle with a ludicrous plot, terrible acting, and strained nationalistic themes. The fight scenes are decently choreographed, but lost in the barrage of cartoonish gun violence. The film elicits minor chuckles with fleeting moments of slapstick humor. The laughs are the sole bright spot. Vanguard is a big disappointment from two of China’s storied filmmakers.

Vanguard starts on a festive note during the Chinese New Year celebration in London. A wealthy businessman, Qin Guoli (Jackson Lou), and his trophy wife are kidnapped in broad daylight by vicious mercenaries. Little do they know that Qin is being tracked by Vanguard, an international security firm for elite clients. Vanguard‘s CEO, Tang Huanting (Jackie Chan), activates nearby agents Lei Zhenyu (Yang Yang), Zhang Kaixuan (Ai Lun), and Mi Ya (Miya Muqi). They rescue Qin, but learn of a deeper conspiracy.

Qin is being hunted by an African terrorist named Omar (Eyad Hourani). He has critical information that Omar desperately wants. Qin’s daughter, Fareeda (Xu Ruo Han), a social media star, is in the African jungle on a wildlife conservation mission. Vanguard dispatches a team to recover Fareeda before Broto (Brahim Achabbakhe), Omar’s lead henchman, gets to her.

Vanguard aims for a Bond/Fast & Furious styled adventure mix with loads of gadgets, beautiful women, and exotic locations. The failure lies in the clumsy execution. First, the visual effects in the film are stunningly bad. Any scene involving animals or vehicle chases become CGI effects at certain points. The change is obvious and poorly done. The film turns into a laughable video game. The bad guys rain weapons fire on the protagonists. They’d be better off throwing their guns instead. The bullets are essentially noisy firecrackers. The goofy action detracts from the skill of the martial arts combat. It’s a cluttered mess that sadly looks awful.

Jackie Chan gets top billing, but is a supporting character in Vanguard. The younger leads have the most screen time and majority of action scenes. Chan shows flashes of his trademark acrobatics, but leaves the heavy lifting to the ensemble. The problem is that they’re not as charismatic. The interaction between the Vanguard team and Fareeda is bonkers silly.

Director/writer Stanley Tong (Supercop, Jackie Chan’s First Strike) goes overboard on the comical elements. He crosses the line from humorous to dumb. This is especially true for the female characters. The supporting actresses are largely relegated to giggling, flirting, and the traditional damsel in distress. Miya Muqi has a few good fights, but is then used as a “honey trap” in an eye-rolling scene.

I am a big fan of Jackie Chan and Stanley Tong. I remember waiting in line to see Rumble in the Bronx. Vanguard is such a huge let down. There’s really nothing to recommend here. The action is ruined completely by the CGI. It boggles the mind that the filmmakers and studio accepted such abysmal special effects. Vanguard is a production of China Film (Shanghai) International Media Co., China Film Group Corporation, and Shanghai Tencent Pictures Culture Media. The film will have a major North American theatrical release, including IMAX screens, from Gravitas Ventures on November 20th.