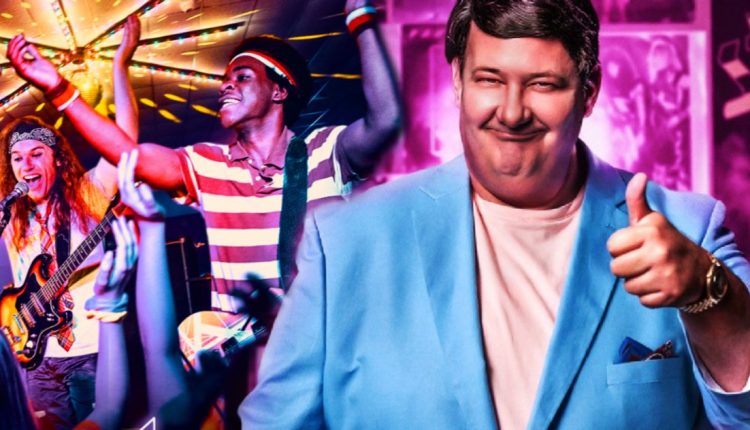 Last month, when 1091 Pictures released their trailer for Electric Jesus, the title alone made me push play. It transports you back to the summer of 1986, and it’s does it well, warts and all. We’re introduced to a group of young men with two things in common, their love of metal and Jesus. Their band 316 has taken the local church youths by storm, and when Stryper’s tour doesn’t come to your small town, these guys can truly give you the next best thing. A local faith-based band manager (He knows Petra!) sees their potential, and they are whisked off to chase their dream of making Jesus famous.

That was what the trailer advertised. I was already in. Brian Baumgartner (Kevin from The Office) is in an exquisitely ill-fitting toupée with Jesus and dollar signs dancing in his eyes as he swoops these rocking but earnest young men from their nervous parents to take them on the righteous road. I scooted over to the film’s website to scoop some more details for my article, and… I fell in love. The website, while it does serve as the film’s hub for information, it truly serves as 316’s fictitious band website where you find out what a true labor of love Electric Jesus is and the writer/director Chris White’s passion for filmmaking.

I’m just going put it out there, I abhor films that center around a singer and the actor doesn’t sing. If they can’t sing, cast someone else who can! There are some sure-fire ways to take a viewer out of the movie, and you can always tell when the ‘singer’ doesn’t even let loose in the shower, let alone on stage. Folks, 316 brings it!! I had to make sure the lead singer Michael (portrayed by Wyatt Lenhart) didn’t have a The Darkness/Jesus cover band called The Lightness. The band’s music (beautifully written by longtime industry favorite, Daniel Smith) will have you bopping, no matter what theology you subscribe to. They rock!

Now that we have that crucial hurtle out of the way; the film. If you can check ‘yes, please’ to Spinal Tap, Napoleon Dynamite, and Almost Famous, you’ve got yourself a wonderful treat to look forward to. The film is a coming-of-age film. It’s a fictitious biopic. It’s a film that parallels a historic moment in time when all we had to worry about music being policed by Tipper Gore. Doesn’t that sound quaint? While we do have some seasoned and admired actors in the film, including Judd Nelson as a fire and brimstone preacher, the up-and-comers are the ones who truly shine. Andrew Eakle, Wyatt Lenhart, Will Oliver, Gunner Willis and Caleb Nix Hoffmann make up our band and Shannon Hutchinson serves perfectly as that one special girl that can change everything.

So go on, and rock out with your bible out and 316, the Christian hair band on a mission to bring the metal word to the world. If I hadn’t convinced you yet, please feast your eyes on 316’s music video for their near-hit, ‘Commando for Christ’. Case closed. Electric Jesus is available on Digital and On-Demand.

SAY WHAT! BTS’ V would ask fellow member J-Hope for Korean noodles in his sleep but claims to have no recollection