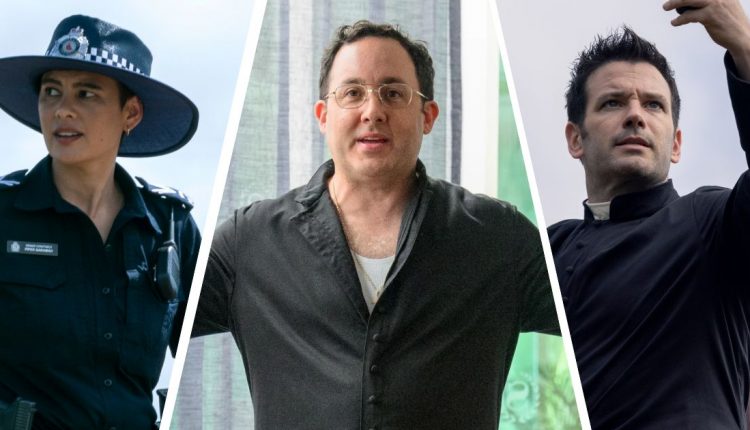 Does God or fate exist, and does life consist of what happens to us, or what we happen to do with it? Irreverent, a new Peacock original series, explores these themes and the meaning of community in a tender, funny, yet surprisingly gripping way. The show follows a career criminal named Paulo (Colin Donnell) who is in deep trouble with gangsters in Chicago. He hops on a plane with a cash-filled suitcase in an attempt to flee with as much distance as possible — to Australia.

However, on the plane ride, he meets reverend Mackenzie Boyd (P.J. Byrne), who is en route to become the new pastor of a small Australian reef town by the name of Clump. Boyd, though, is suffering a crisis of faith, his wife having left him prior to takeoff. Between shots of liquor and handfuls of pain pills, the two have a wild night in Australia, and when Paulo wakes up, he realizes that the man of God has stolen all of his money and taken his identity. With nowhere to turn and no money to spend, Paulo puts on the clerical collar and heads to Clump, impersonating Mack until he can figure out his next move.

Clump is a beautiful small town, filled with warm residents (think Northern Exposure if Alaska was swapped for Malibu, with sharks instead of moose), which means that Paulo (now “Mack”) doesn’t fit in. The town’s police officer, Piper (Kylie Bracknell), picks up on this immediately, and what transpires is a friendly, delightful good time of a show. Donnell, Byrne, and Bracknell spoke with MovieWeb about Irreverent and their characters.

Colin Donnell Fakes Being a Priest in Irreverent

“This character in particular was so multidimensional. He is quick-thinking and funny. He’s a little dark but he’s caring. And really, for me, it was such a fun experience to be able to bring out all of those things and sort of use all the tools that are at my disposal in one package,” said Donnell, famous for Arrow, The Affair, and Chicago Med. “To be able to be funny and to be in the heart that is at the core of this show is so wonderful. I think Paddy [Macrae, the creator of Irreverent] and our whole writing team did such a wonderful job to really balance out the scales of the absurd but also the core values of community and redemption, and trying to figure out who we are as people, fitting into a new landscape and trying to right the wrongs of our past and growing as individuals.”

Donnell’s character embarks upon perhaps the most significant arc of the series, as he goes from the selfish criminal Paulo toward a place of selflessness and community as the reverend Mack. “I think at the beginning of the series, we see him in a sort of self-serving place, doing a job that he does very, very well. And when his life blows up, and he’s forced into a completely foreign situation, it makes him take a look at himself. It makes him take stock of his surroundings and figure out how to fit in, because he’s confronted by new people in his life that really force him to look at who he is, what he’s doing, and why he’s doing all these things.”

Irreverent is Spiritual in the Most Human of Ways

One of the most emotionally poignant relationships in the series is between the charlatan Mack and a sort of outsider in Clump, Daisy, a vagabond, neglected young woman who becomes a sort of mirror to Mack. “I think one of the relationships that I most loved was the relationship between Mack and Daisy,” said Donnell. “She is sort of his young counterpart, and he sees all these things in the path that she could easily go down if she’s not careful. And so there’s a part of him that bubbles up to the surface that wants to automatically protect her from all the things that he experienced as a kid. Plus it was just such a joy when you’re working with somebody like Tegan Stimson, who plays Daisy, she was such a wonderful actor and gave me so much back and forth within the scenes, that it made my job so much easier to feel like I wanted to take care of somebody like that.”

“But that’s the growth, that’s the wonderful growth of Mack,” Donnell continued, “is him starting to figure out parts of himself that he didn’t know were there, that he’s finally able to explore because of the people he’s with and because of the situation that he’s in.” The communal element in connection with the religious element of the show is fascinating — Irreverent stays away from theology, but posits church and spirituality as a communal enterprise which is deeply rooted in the human experience, rather than abstract metaphysical queries. Donnell explained:

One of the things that I loved about his writing was that it was not necessarily geared towards one religion. It was sort of universal truths about action and community and how to take care of one another, and atoning for whatever you feel like may have gone wrong in your past. It didn’t get into God necessarily; it was about self-improvement as a human being first, and I love that aspect to it. I mean, I think when you look at things that are universally human as opposed to spiritual aspects of things, it makes it more relatable, and it brings more people into it.

“Piper is somebody who is incredibly multidimensional. Driven, passionate, determined, eager to make a difference and impact, as a woman in this world and in her chosen field, she kind of has a point to prove, and I think she knows that she can do it intellectually. I think she’s got the goods to be a detective one day,” said Bracknell of her character, a strong but kind woman who has recognized the often elusive qualities of community in Clump and embraced it.

Piper is placed in an interesting position in Irreverent — she has the duty of policing the town of Clump, but she’s also a warm member of it; she’s a single woman and an Indigenous member of the community, though, and perhaps feels a bit isolated despite the love which surrounds her. “I think that she loves the foundation that Clump provided her. It’s given her a sense of belonging and connectedness that one can have to their hometown. Particularly, there’s Indigenous culture embedded into her existence as well. So there’s that sense of deep gratitude and always giving back.”

“But for Piper,” continued Bracknell, “she wants to go outwards and be successful in order to bring something back, so I think that she grapples with that. And so in the town of Clump itself, she invests in relationships, particularly with her relationship with Daisy and wanting to leave positive impacts. Once the new reverend comes to town, who is unlike what anyone expected the new reverend to look like, and sound like, and act like, I think Piper obviously notices that he stands out. She has an opportunity to put to work all the tapestry that is part of her — the small town raising, being respectful in relationships, and treating people with kindness at first glance, and being helpful. But also, her career mindset has her going, ‘Okay, he’s a reverend, but he looks a bit disheveled. He doesn’t have a license. He’s got to have all the paperwork, because we respect the law. Something doesn’t seem right.’ So it gets very interesting, very quickly.”

P.J. Byrne on the Flawed Humanity of the Real Irreverent Reverend

“I love finding these characters to play,” said Byrne excitedly. “I talk about it all the time, the totality of the human, just showing all the warts, and the happiness, and the high moments, and the lows. I love things that can show heart and humor, even in these horrible situations. My favorite show back in the day was M*A*S*H — there are these times when you’re belly-laughing, at times you’re crying because it’s really tough to watch, and that’s what this show sort of offered.”

“My part had such a great jumping off point from the first moment of the show,” continued Byrne, a beloved character actor who has discovered the humanity in a huge range of great parts. “You have a reverend going to a new flock and his wife leaving him at the airport. He’s done everything right his whole life, he found a woman to love, he became a priest, he believes in God, but once love is sort of taken from him, he has a crisis of love, which leads to a crisis of faith. And that to me is like starting at a low point, and he’s using the tools he would for his flock, like, just be happy. But it’s not working for him, because I don’t think he’s ever had to look inward. He is a little bit of a narcissist; everything sort has always fallen in place in his life.” Byrne explained:

So now he’s taken the money from this man, which on some level he really believes [Mack] told him to; Mack was like, “Freedom! If you see something, there’s no God, just take it!” So my character feels very justified in his ways, and he knows he’s gonna go ‘find himself’ with this money and see another side of the world. And he really believes that Mack, in becoming a priest, is going to learn as well, because he knows that this man was such an individualist, thinking only about himself. But when you become a reverend, you have to take on the community’s problems.

Irreverent is an endlessly comforting feel-good show, not just because of the kind yet complex characters, the gorgeous scenery, the quirky humor, and the touching relationships, but also because of how it explores each person’s problems with compassion. “That’s what I love about the show too, is this idea that every home has a story no matter what place in the world you’re in. We’re all kind of going through the same things,” said Byrne. “That’s why I love this show, it’s sort of this warm blanket for the world, which says, ‘I know you’re struggling sometimes at home, and we’re here for you with this the show, we’re here to go on that ride with you.'”

Irreverent will premiere on Peacock on November 30.

“I Won’t Be Able To Do Justice To Those Films”