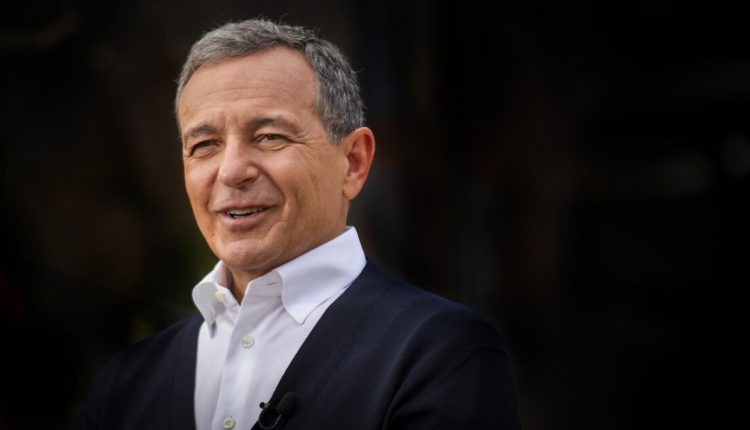 The Sunday night announcement by the Disney board stunned Hollywood.

The switch comes less than a year after Iger said his long goodbye after a storybook 15-year run as chief executive.

Disney’s board said that Iger had agreed to serve two additional years as chief executive.

Iger, in a statement, said he was “thrilled” to return to his longtime home.

He takes over for his hand-picked successor, Bob Chapek, who suffered a number of setbacks during his nearly three years as chief executive.

It’s not clear what triggered the board’s decision, but directors were said to be increasingly impatient with the company’s shaky financial performance and organizational changes Chapek made at the Mouse House.

The company recently disclosed that it had lost $1.5 billion in the July-September financial quarter on its streaming service business, including Disney+, and investors have been getting restless, driving down the company’s stock.

The company is currently valued at $164 billion. Over his career as CEO, Iger grew the company’s market capitalization from $48 billion to $257 billion.

Also unpopular was Chapek’s reorganization of Disney in the fall of 2020 that consolidated power under a business executive, Kareem Daniel, and stripped away much of the financial decision-making by high-level creative executives. The change fostered resentments because some of the executives felt their creative autonomy was taken away, according to several Disney insiders who were not authorized to speak publicly.

In fact, Iger and Chapek were feuding for much of last year with Chapek feeling that Iger’s long shadow and extended good-bye (he remained as chairman until December) was not allowing him to run the company as he saw fit, according to a people knowledgeable of the situation.

“We thank Bob Chapek for his service to Disney over his long career, including navigating the company through the unprecedented challenges of the pandemic,” Susan Arnold, Chairman of the Board, said in a statement. “The Board has concluded that as Disney embarks on an increasingly complex period of industry transformation, Bob Iger is uniquely situated to lead the Company through this pivotal period.”

Iger would have a “mandate” from the board “to set strategic direction for renewed growth” and to help the board to groom a successor who will take over in two years, the company said. The CEO shuffle was stunning because it came six months after the board extended Chapek’s contract an additional three years, citing his strong leadership during the pandemic.

But the industry has become more tumultuous since last spring. Media companies throughout the industry are worried about a potential recession and advertising commitments have softened — a troubling harbinger for more choppy waters ahead. A recession could deliver another blow to the company’s sprawling theme park business just as it is mounting a comeback from the effects of the COVID-19 pandemic on tourism.

Chapek’s leadership had been under a microscope after a series of controversial moves and missteps, including a legal battle with star Scarlett Johansson in 2021 and a public spat earlier this year with Florida Gov. Ron DeSantis, which prompted the governor to target laws that favor Disney’s business in the state. Chapek also fired the polished head of Disney’s vast television unit, Peter Rice, without providing a clear reason why.

“I am deeply honored to be asked to again lead this remarkable team, with a clear mission focused on creative excellence to inspire generations through unrivaled, bold storytelling,” Iger said Sunday in a statement. “I am extremely optimistic for the future of this great company and thrilled to be asked by the Board to return as its CEO.”

Iger made his mark on the company with several key gambles that paid off handsomely. In 2006, Iger led Disney to buy Pixar Animation Studios from Steve Jobs in order to rescue Disney’s flagging animation business.

That was followed by the 2009 deal to purchase Marvel Entertainment, which has resulted in a virtually unbroken streak of box office winners produced by Kevin Feige. In 2012, Disney bought Lucasfilm from George Lucas and relaunched the “Star Wars” film franchise with a new trilogy.
Iger said in a statement.

“Disney and its incomparable brands and franchises hold a special place in the hearts of so many people around the globe—most especially in the hearts of our employees, whose dedication to this company and its mission is an inspiration,” Iger said.

Contestants To Splash Water On The Housemates, Shekhar Suman Returns To Bring Laughter To The House

How ‘The Walking Dead’ changed the course of the TV revolution