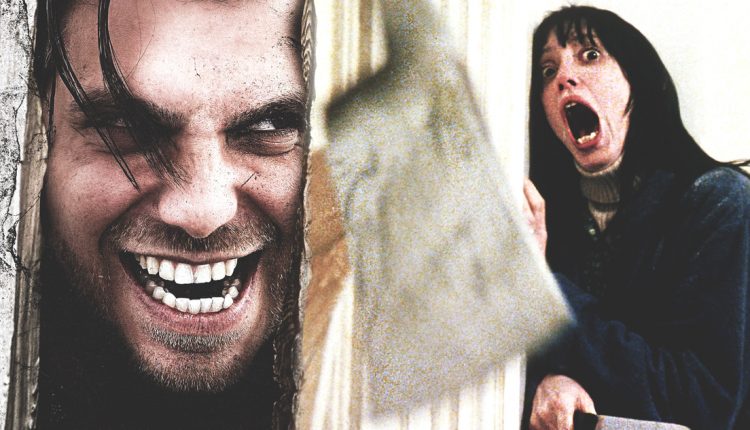 Spencer Charnas wears his love of horror on his sleeve. Seriously, he’s often photographed in a custom-made Freddy Krueger sweater. His Jason Voorhees mask, the Michael Myers style butcher knife, and Springwood Slasher glove have all been brandished onstage. It’s just the tip of the icepick – er, iceberg – for the genre obsessed Ice Nine Kills frontman. The Silver Scream, the band’s Billboard 200 charting 2018 album, is a conceptually driven love letter to horror, with songs based around A Nightmare On Elm Street, Friday the 13th, Scream, and Silent Night, Deadly Night, among other classics. In a recent episode of the PopCurse podcast, presented by Movieweb, the Massachusetts native went in-depth about his love for The Shining, Stanley Kubrick’s masterpiece adaptation of Stephen King’s novel about a writer’s descent into madness. His band’s 2020 five-song EP, Undead & Unplugged Live from the Overlook Hotel, was recorded at the real-life location that served as inspiration for King’s story. Among the multitude of topics covered in the wide-ranging chat, Charnas explained how his band found themselves staring at the masks from Eyes Wide Shut and the Best Visual Effects Oscar for 2001: A Space Odyssey at the Kubrick family estate, Childwickbury Manor, in Hertfordshire, England.

The Shining debuted 40 years ago this year. What was your first encounter with this film?

Spencer Charnas: I believe I was introduced to the film from the iconography that kind of came along with it. When I would go to stores in New England, like Newberry comics, I was probably six or seven years old, going to buy a White Zombie or Nirvana shirt. I wanted my walls to be covered with really cool posters. I would look at posters, trying to find my favorite bands. And there would generally in these kind of stores be some stuff from like Reservoir Dogs or Goodfellas. One prominent image I remember scrolling through on those poster racks was that image of Jack Nicholson coming through the door, which became burned into my psyche. ‘What is this? What is this movie, The Shining? It sounds so cool.’ Later, I was eventually allowed to rent The Shining. I was an avid slasher fan at that point, but this was the first time I saw a movie that was more a psychological thriller, filmed in a sort of way that was a bit avant-garde. It introduced me to that sort of off the beaten path style of filmmaking. I remember being blown away by it. It’s one of the few in the horror genre that’s like that, that I really love, because I am more of a slasher guy in general. 40 years later, we are still talking about it, so clearly, they did something right.

Lots of people are aware of the more famous scenes, but what I was struck by a few years ago, seeing a really great print of it at a Cinespia screening in Los Angeles, was what an experience the movie is; it’s so immersive and surreal, from start to finish. The vibe is just incredible.

Spencer Charnas: I agree. It’s that tone that permeates through the entire film. Even how the minimalized musical score complements his descent into madness. You can’t appreciate that from just the sort of pop culture beats; you have to watch it completely. You hear about Stanley Kubrick [being] a perfectionist. I really respect how dedicated he was to his craft.

One of the most striking aspects is the idea of the environment as a character. The hotel, even without the supernatural element; the maze; the drives up the mountain; it all feels so alive.

Spencer Charnas: Absolutely. It’s like the hotel is this entity, and you feel it getting sinister with every sort of turn of the tricycle. It’s one of those films where every shot, every cut, everything feels so intentional. I’m always blown away when I see that movie. I usually pick up something new that I didn’t notice before. It definitely changed the way that I think about horror.

It’s crazy that critics weren’t fond of it at first.

Spencer Charnas: I was surprised to learn recently that it was nominated for two Razzies. I mean, that’s insane to me, wow. Worst Director for Stanley Kubrick, Worst Actress for Shelly Duvall.

It’s my understanding that King was against casting Nicholson, because his persona from other films would tip the audience off too early about his descent into madness. He should be seen as a normal, likable guy at the outset. Time, of course, has proven that wrong. I bet there are a lot of people who associate ‘Here’s Johnny!’ more with The Shining than The Tonight Show.

Spencer Charnas: That’s one of the most famous lines of the film, which was added by Nicholson. I guess Kubrick didn’t even know what he was referencing. That’s what I read. He just he loved the delivery. And thank God, obviously, because that’s one of the probably the most iconic lines. Part of the genius of Kubrick was that he wasn’t looking at the short term; he made films to stand the test of time. We’re of a generation that wasn’t so aware of Nicholson before this; my first times seeing him were probably this or maybe as the Joker in Batman. Perhaps King’s point about his casting affected some of those reviews, but 40 years on, people see the movie as a brilliant work of art; it’s a testament to Kubrick having a perspective that wasn’t so in the moment.

My dad turned 81 this year. I’m sure when he saw The Shining in 1980, he was aware of who Scatman Crothers was beforehand. Whereas I have only a vague understanding of him outside of The Shining. This movie is my primary association with him. As you point out, Kubrick was apparently able to see past those immediate associations, with a long view for how it would play. I’ve read that prior to Nicholson, Kubrick considered Robert DeNiro and Robin Williams.

Spencer Charnas: If Robin Williams had been cast in that, how would that have changed the trajectory of his career? I could see that. DeNiro would definitely have done a great job.

The ‘What If?’ universe where the role went to Christopher Reeve, like, how would that pop culture subversion of expectations play? That would have satisfied King’s concerns maybe.

Spencer Charnas: Yes, Robin Williams, Christopher Reeve, even Harrison Ford would have had that sort of ‘against type’ kind of thing.

We have to talk about your personal and creative collision with The Shining. There’s the song, “Enjoy Your Slay,” and this year’s EP, Undead & Unplugged Live from the Overlook Hotel. But there’s also your connection with Kubrick’s family and the Kubrick estate in the UK.

Spencer Charnas: It is an interesting story. We weren’t yet in a position to get great offers to support bigger bands, so we decided to just headline our own tour of Europe. I was tasked with finding opening bands the tour. One group in particular, Shields from the UK, struck me as pretty cool. We took them on tour and became very friendly with them. We had a day off before our show in London and the band’s guitarist, Sam, a very nice guy, offered to let us stay with him. An invitation to someone’s house, in an unfamiliar country and when your band can’t really afford great accommodations, is [very cool]. Our tour manager had met Shields before this tour. He says, ‘You know who the guitarist is, right? He’s Stanley Kubrick’s grandson. We’re going to stay at the Kubrick estate.’ I’m like, ‘Are you messing with me? Is this a joke?’ We stayed in the barn where Sam’s grandfather used to edit his films, where he cut The Shining. Sam was an incredibly gracious host. He gave us free reign to dig through boxes! I saw the original audio reel from Full Metal Jacket. One room in the main house had the masks from Eyes Wide Shut on the wall.

It’s like being allowed into a museum after hours.

Spencer Charnas: Yes, like a personal VIP experience, you know? We saw Stanley’s personal library, which was obviously very impressive, with one of those ladders that slides. All of his awards are there; his Academy Award for 2001: A Space Odyssey is there. We met Sam’s father and family. Stanley Kubrick, of course, died in 1999. He’s actually buried on the property. They were all just so kind. We’ve had a warm relationship with them for years since. They were nice enough to store our gear there, so we wouldn’t have to ship it every time we came to Europe.

The interior hotel stuff was done on a set, at Elstree Studios in Hertfordshire, England. The exterior shots are actually the Timberline Lodge, in Mount Hood, Oregon. Ice Nine Kills performed at the Stanley Hotel, in Estes Park, Colorado, where King actually stayed in 1973.

Spencer Charnas: It was crazy. We were in the midst of a radio campaign, doing a lot of morning radio performances, where you come in and play acoustically in the morning. It can be very difficult, to come in at 7 a.m. after sleeping for two hours on a tour bus. A station in Colorado was nice enough to invite us to the Stanley Hotel. It was a small, intimate show, only 200 tickets available. We went up to Room 217 – which was changed to 237 in the film – where Stephen King stayed. We heard a lot of stories about the paranormal activity had thought to have existed at the hotel. One of my favorite comedies, Dumb and Dumber, filmed there. They told us that Jim Carrey requested to stay in Room 217. He apparently awoke in the middle of the night, ran out of the room, and told the people at the front desk, ‘Get me out of this hotel!’ I’m not saying whether the story is true or not. I highly recommend checking out that hotel. It’s beautiful.

The rest of the conversation includes a discussion of the animosity between Kubrick and King; the more faithful TV adaptation; the Cursed Films series on Shudder; last year’s sequel, Doctor Sleep, starring Ewan McGregor; the various conspiracy theories about The Shining, and more. Listen to the entire PopCurse episode with Spencer Charnas of Ice Nine Kills right now.