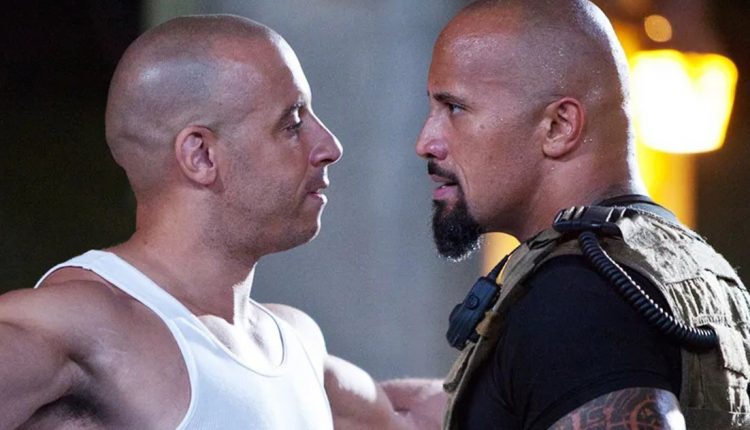 Dwayne Johnson has offered a response to Vin Diesel’s comments that their highly publicized feud was nothing more than an act of “tough love.” In the previous three Fast and Furious movies, Dwayne Johnson starred alongside Vin Diesel as part of the franchise’s ensemble cast. He has since moved on to co-starring with Jason Statham in the spinoff Hobbs & Shaw with no apparent plans for The Rock to return for the final Fast movies.

Infamously, Dwayne Johnson and Vin Diesel quarreled on the Fast and Furious movie sets. Speaking with Men’s Health in the June issue, Diesel claimed that he was actually just trying to get a better acting performance out of The Rock. The Dom Toretto actor noted, “I could give a lot of tough love. Not Felliniesque, but I would do anything I’d have to do in order to get performances in anything I’m producing.”

RELATED: F9 Speeds Past $500 Million at the Worldwide Box Office

Of course, these comments quickly made their way back to Johnson, who was apparently amused by the whole thing. Recently, Johnson and Emily Blunt chatted with The Hollywood Reporter to help promote their new movie Jungle Cruise. Johnson was asked directly about Diesel’s “tough love” remarks, and here’s what The Rock had to say about that.

“I laughed and I laughed hard. I think everyone had a laugh at that. And I’ll leave it at that. And that I’ve wished them well. I wish them well on Fast 9. And I wish them the best of luck on Fast 10 and Fast 11 and the rest of the Fast & Furious movies they do that will be without me.”

If we’re reading between the lines here, Johnson finds it laughable that “tough love” would be the words used to describe his relationship with Vin Diesel. He also suggests that there’s not going to be a genuine reconciliation anytime soon, making it clear that there’s no interest on his end in returning to the Fast and Furious movies where he’d have to once again work with Diesel. Still, he’s staying on the high road by wishing everyone involved well with finishing the series.

The Rock might be out of the Fast and Furious series, which is set to conclude with the eleventh installment. Even so, we might see more of Johnson as Luke Hobbs in a sequel to the spinoff Hobbs & Shaw. Last year, Johnson said that a sequel was in early development with Chris Morgan attached to write the screenplay. The movies share a cinematic universe with the Fast and Furious franchise, though we probably shouldn’t bet on seeing a Dom Toretto cameo in Hobbs & Shaw 2.

Meanwhile, Diesel has found another major pro wrestling star to serve as a primary player in the Fast and Furious movies. John Cena made his debut in F9 as Jakob Toretto, Dom’s brother, a casting choice that Diesel says came to him from the late Paul Walker. Cena will likely play a big role in the final two movies of the series which will begin production in January, according to Diesel.

The Rock can next be seen alongside Emily Blunt in Jungle Cruise which will be released by Disney on July 24. This news comes to us from The Hollywood Reporter.