How Tucker Carlson made Kyle Rittenhouse a right-wing star 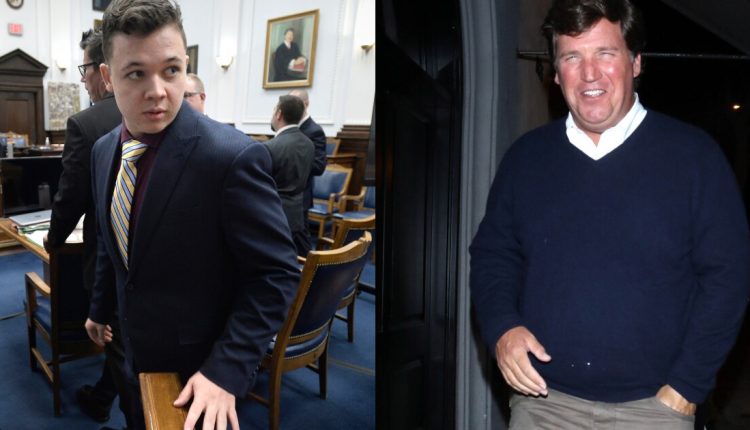 During an hourlong sit-down on his Fox News program Monday night, Tucker Carlson canonized the deadly actions of Kyle Rittenhouse, the teen who brought an AR-15 rifle to a Black Lives Matter protest and killed two unarmed men — painting the young man as a brave American hero, an innocent victim and a “sweet kid.”

“He’s not especially political,” said Carlson of Rittenhouse, who last week was cleared of reckless homicide in the slaying of Joseph Rosenbaum, 36, and intentional homicide in the death of Anthony Huber, 26, as well as three more charges stemming from his actions at an August 2020 protest sparked by the shooting of Jacob Blake, a Black man, by a white Kenosha, Wis., police officer. The divisive trial proved a lightning rod for already heated questions around the threat of vigilantism, the definition of self-defense and gun control.

“He never wanted to be the symbol of anything,” Carlson proclaimed in his opening monologue on Monday’s episode of “Tucker Carlson Tonight,” before holding Rittenhouse up as “bright, decent, sincere, dutiful and hard working — exactly the kind of person you’d want more of in your country.” The host recited the words over a chyron that read, “Everything we heard about Rittenhouse was a lie,” and railed about the “thoroughly and intentionally dishonest media coverage” around what were, in Carlson’s view, the courageous actions of a valiant young man. “He just wanted to stop violent lunatics from setting fire to cars. In the America he grew up in, that was considered virtuous.”

The interview was a sickening display of how far we’ve fallen as a nation — media maniacs like Carlson conflating anarchy with patriotism, and the right embracing deadly violence as they once did conservative values.

A smug Rittenhouse, now 18, showed no emotion as he methodically recounted to Carlson how he shot two the men —though he quite carefully failed to mention that he killed them — and maimed a third. “I agree with the BLM movement,” he told Carlson, confident and even smiling at times while reliving the bloody sequence of events. “I agree everybody has the right to protest and assemble, but I do not agree people have the right to burn down … American cities to try to spread their message. I believe there’s other ways to do that.”

No, Rittenhouse’s way was provocation, as the prosecution at his trial argued, bringing a military-grade rifle to a protest then claiming “self-defense.”

The “rioters” — as the protesters were called throughout the interview — came after Rittenhouse, he and Carlson claimed repeatedly. Rittenhouse was “attacked” unprovoked, an innocent victim of circumstance, a 17-year-old kid who was just there trying to help. He was there to provide medical aid. Or was he there to protect a car lot? Never mind, he’s a hero. Who has time for details?

Rittenhouse explained that Rosenbaum came up to him and said, “‘If I catch any of you motherf— alone, I’m going to f— kill you.”

“So you’ve never seen this guy, and he walks up and threatens to kill you out of nowhere?” Carlson asked.

“Yes,” answered Rittenhouse. “It was quite shocking. Why would somebody threaten to kill me? I was just asking if people need help on both sides. I was there just to help anybody that needed it. Shockingly, the only people I helped that night were rioters.”

Carlson also cued up Rittenhouse to deny accusations that he’s a white supremacist who was drawn to the protest by his opposing beliefs. Yet “Tucker Carlson Tonight” — which showed footage from the protests that worked in Rittenhouse’s favor — somehow failed to produce the widely circulated photo of Rittenhouse in a bar with two Proud Boys, wearing a “Free as F—” shirt and flashing what appeared to be a “white power” hand gesture.

Instead, the show spent much of the hour reiterating the same victim/hero/blameless child lines. Rittenhouse revealed an immense amount of entitlement — and some of the same hubris he displayed on his face during the trial — when recalling how bad his first round of attorneys were for his case. They were not there in his best interest, he maintained, but rather were using him to further their own cause. Carlson nodded.

And then more woe-is-Kyle. He described jail as an awful place, a “one-star hotel” — yet he had his own room with an iPad, a desk, a phone. He spent 87 days in jail awaiting the trial. That’s a lot of time, commented Carlson.

“It is,” said Rittenhouse. “I lost a lot of weight in there. I’ve since gained it back.”

“I know the feeling!” joked Carlson, and both men had a chuckle.

Carlson summed up the exchange for his viewers before the chat moved on to this boy’s bright future: “Imagine putting that kid in jail, one of the only people who was in downtown Kenosha that night for the right reasons. He was trying to help bring order out of disorder. He was trying to protect rather than destroy.”

The madness of Carlson’s angry, hate-filled universe generated another bit of news on Monday when two Fox News contributors quit over a documentary that described the Jan. 6 insurrection as a “false flag” operation orchestrated by President Biden. Jonah Goldberg and Stephen Hayes said the misinformation in the “Patriot Purge” documentary was “dangerous,” namely the conspiracy theory that there is a plot by Biden to “conduct an ideological purge and persecute conservatives.”

Next up from America’s most widely watched right-wing ideologue, a documentary about Rittenhouse due out next month, woven from material shot by a film crew embedded with Rittenhouse throughout the trial — despite Rittenhouse’s defense attorney saying he “didn’t approve” of the production.

And Fox should have never approved of this softball interview, either, where a vigilante was coddled by a madman, and humanity was forsaken for ratings.

When Adele cries, we cry: Watch her viral teacher reunion