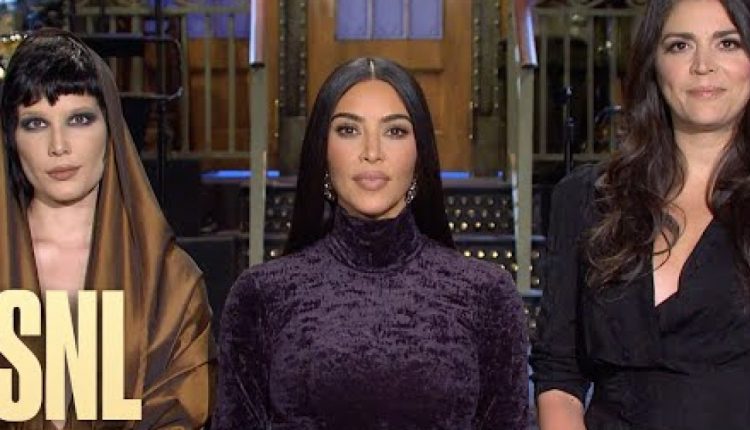 Kim Kardashian West is coasting through her “Saturday Night Live” hosting gig this weekend because it’s “so easy.”

The “Keeping Up With the Kardashians” star hosts “SNL” on NBC this Saturday at 11:30 p.m. Eastern. As usual, the live episode is recorded and rebroadcast in other time zones, so it’ll air in Los Angeles on NBC at 11:30 p.m. Pacific. Peacock subscribers can also watch her much-hyped hosting stint live on the NBC streaming platform.

“Why? I don’t have to write sketches, do I?” she said alongside cast member Cecily Strong and this weekend’s musical guest, Halsey. “Memorize lines?”

“No, there are cue cards,” Halsey replied.

Nor would anyone else “look as good” as the KKW cosmetics and Skims founder, who also previewed some of the glam she brought to 30 Rock?

“No, absolutely not,” Strong assured her.

“This is so easy,” Kardashian quipped.

“Saturday Night Live” has been diversifying its ilk of hosts, choosing non-entertainers like Tesla mogul Elon Musk, to helm the series for a week. And the move lights up Twitter and hypes the show even if it’s a gimmicky ratings grab.

Still, the selection of Kardashian West, who has done little acting and had a failed stint as a singer, also got heat from the likes of actress Debra Messing and others in Hollywood because she wasn’t a traditional “performer.”

“I mean, I know she is a cultural icon, but SNL has hosts, generally, who are performers who are there to promote a film, TV show, or album launch. Am I missing something?” Messing tweeted shortly after “SNL” announced Kardashian as host.

The fan base, Debra. And, not to be dismissed, the reality star-turned-aspiring lawyer always has something to promote. This time around it’s her new series for Hulu, which she’s already begun filming with her famous family since their departure from their longtime home at E! earlier this year.

Suhana Khan Gets A Doppelgänger, Amid Aryan Khan’s Arrest, Her Videos Go Crazy Viral On The Internet