How the Flaming Lips pulled off COVID-distancing bubble shows 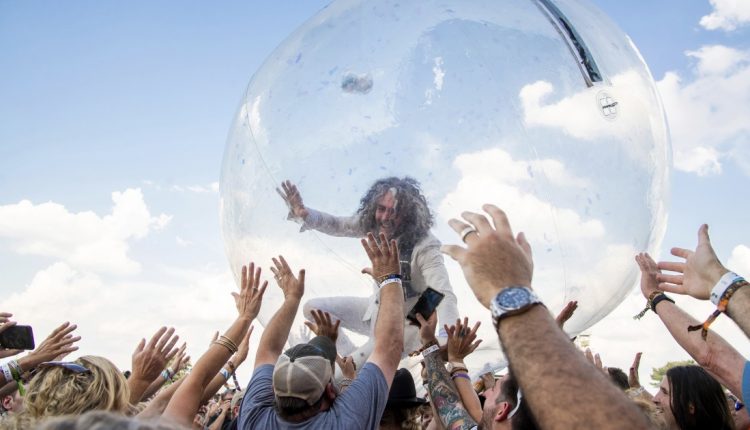 The Flaming Lips pulled off their first full-length space bubble concerts this weekend in Oklahoma City, with both the band and audience members sequestered in their own zip-up bubbles.

The band performed a couple of sold-out shows in promotion of its 2020 album “American Head,” featuring 100 inflatable audience bubbles with enough room for up to three people inside.

Frontman Wayne Coyne, who has been crowd-surfing in the bubbles for years, held a test run in October after debuting the inventive concept in June with a single-song performance before bubbled onlookers for “The Late Show With Stephen Colbert.”

“I don’t want anybody to think this is some kind of f— freak party,” he told Rolling Stone in December. “It’s a very restricted, weird event. But the weirdness is so we can enjoy a concert before putting our families and everybody at risk. I think it’s a bit of a new normal — you might go to a show, you might not, but I think we’re going to be able to work it out.”

Originally planned for December, the “Space Bubble” concerts were postponed after COVID-19 cases began to rise in Oklahoma City. During the performances, the band brought out enormous balloons spelling out “F— You COVID-19.”

Is the concept viable for other acts? Perhaps — if venues take the precautions the band implemented and if there is enough staff for bubble maintenance.

First, as Coyne told TMZ in November, you need a lot of open space around the main concert floor to make it easier to keep masked ticketholders distanced while they get into the bubbles, a process that takes about 45 minutes. The bubbles, Coyne said, hold enough oxygen for three people to breathe for approximately an hour and 10 minutes before they must be refilled or unzipped.

Inside the bubbles, as detailed in an instructional video on Coyne’s Instagram feed, are “high-frequency supplement speakers” for each concertgoer to wear around the neck like a backstage pass. This helps prevent muffling of the sound through the plastic, especially for those in the back of the venue.

The bubbles are also fitted with individual battery-operated fans, also worn around the neck, and commemorative bottles of water as well as a towel “to wipe down the condensation build-up on the inside of your space bubble.” Apparently, it can get steamy inside. Which is why each bubble also has a sign that says, “It’s hot in here.” “Show this to the attendant,” the video instructs, “and they will refresh your space bubble with new, cool air.”

On the other side of the sign is the message, “I have to pee.” This message will prompt the attendants to help you get in and out without disturbing fellow bubbled audience members.

At the end of the concert, audience members are told to roll their bubbles to the exit. A process that would seem to be as amusing for those certain-to-be overworked attendants as the show itself. “Once outside the venue,” says the instructional video, “you can unzip your space bubble and get out.”

What's on TV Monday: 'Snowpiercer' on TNT and more