How ‘Station Eleven,’ ‘Atlanta’ DP is changing the face of TV 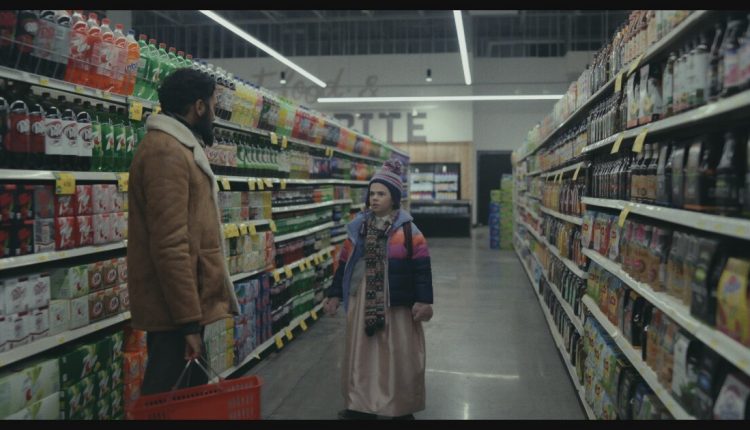 Television, obviously, is a medium of pictures. Yet for many, many years, owing to technical, practical and economic reasons, the pictures were not much to look at: flatly lighted, stolidly framed, fashioned to convey dialogue, broad action and necessary information but rarely to communicate mood or tell their own sort of story.

That is all different now. Even small televisions are big, crisp with detail, digital cameras are capable of visual poetry and it is taken for granted that, even within its practical constraints, television can accommodate beauty.

I first became aware of cinematographer Christian Sprenger when I noticed his credit, because I had noticed his work, recurring on a string of interesting comedies — “Baskets,” “GLOW” and “Atlanta,” comedies with dramatic power and heft that took account of light and modeling and atmosphere, of faces and places and bodies in space.

Since then, he’s shot the series-defining pilot of “What We Do in the Shadows” and the first and third episodes of “Station Eleven” in partnership with “Atlanta” director Hiro Murai. (Sprenger, who won an Emmy for the Season 2 “Atlanta” episode “Teddy Perkins,” has shot every episode of that series so far, as well as the first half of the upcoming third season.) Other work includes “Last Man on Earth,” “Kroll Show,” the 2017 film “Brigsby Bear,” Super Bowl ads, music videos and a host of early career web shorts after graduating from Chicago’s Columbia College in 2007.

The following conversation was conducted by email.

Did you make films/videos before college, about what, and with what sort of equipment?

My earliest ambitions were to work in the movies as a set designer. I was enthralled by sci-fi movie sets and practical effects, and learning to build and design those seemed like the most magical job anyone could have. I was too young and naive to understand what a director or a cinematographer even was then, but it set me on a path.

Growing up, our family was really into home movies; in the early ‘80s my parents picked up a VHS-C video camera and anyone could grab it and start filming. By the time I was in high school I was experimenting with 8-millimeter film and 35-millimeter stills and started to teach myself editing. I joined a high school-level TV/video program when I was 16, and it was really that teacher and those few fellow students that convinced me a career in this field was possible, even in suburban Chicago.

Did you start out wanting to shoot films or direct them?

I ended up studying cinematography in college almost by mistake. I had submitted a college application to major in 3-D/visual effects, but on the day of my freshman orientation, I accidentally went to the cinematography presentation. Suddenly I realized how comfortable I already was around operating a camera and that I had a huge advantage to advance in the program and get to learn some really cool things. By the end of that day I declared my new major.

Before getting to film school, it was Steven Spielberg, George Lucas and James Cameron who really ignited my interest in wanting to make films. Once in film school, I was introduced to more of the punk rock side of cinema: David Lynch, Jean-Luc Godard, Spike Lee, Michael Haneke and young directors like Spike Jonze and Chris Cunningham who were making huge splashes in short-form. Those were truly artistically formidable years.

My own generation of filmmaking friends shot on 16-millimeter in college. Did you have an opportunity to work with nondigital mediums?

One of the luckiest things about Columbia Chicago’s film program was that it was just that, a program based solely on film. The entirety of undergrad, we did nothing but learn how to light and expose celluloid film. We had one digital video class in our fourth year, an introduction to video formats and a preview of what was to come, but I think we were some of the last of our generation to grow up and be educated on motion picture film as opposed to digital.

The year that we graduated was also the year that all the digital motion picture film cameras were introduced at a large scale, and so while I was just beginning my professional career, film was switching over to digital in the industry. I was incredibly lucky to be learning this new format at the same pace as the rest of the industry but still had film as my core education; it couldn’t have been more perfect timing.

Never once in film school did the thought of working in television ever cross my mind; we were studying cinema and I wanted to make films. Back then, “television” meant low-quality content. The only time we ever even discussed television was in an editing class when one of our assignments was to take a day’s worth of dailies from “Law & Order” and cut a scene together. I think deep down I will always and forever be chasing that dream of making films. If I happen to be shooting a television series, so be it, but I will approach it like I would a film.

You came to television by way of web shorts (including my beloved “Ghost Ghirls”). What did you learn on the way?

At the beginning of my career I shot just about anything I could get my hands on, and at the time there was a lot of interest in those. Ultimately this was a great training ground, as every little one- or two-day project called for a totally different aesthetic. It was like boot camp for developing a look very, very quickly, usually with very little money. Most of the work was also comedic and I quickly learned how to design aesthetics that supported the story or the joke that didn’t overshadow or distract. Those were terrifically educational years for me.

How would you describe your style, if you think you have one? Do you have a philosophy of cinematography?

I’d like to think that I don’t have a specific style. Too often, one’s own style can interfere with the story you’re trying to tell. I hope my style is that I make aesthetic decisions that properly support the story. I do have some philosophies in lighting and lensing, but I try hard to serve them surreptitiously. I am partial towards images that feel as though they were captured on film stock as opposed to on a digital sensor. I try to approach a scene simply, not to over-light; the old adage of “light the space, not the face” could perhaps describe my base approach; perhaps “controlled naturalism” would be a way to describe how I tend to see things.

What drew me first to your work was noticing your credit on comedies that I felt had a more “serious” look to them — “Baskets,” “Atlanta” — and sought not merely to convey information but to create an atmosphere that colored the comedy, that paid it respect in a way.

Along the way I started to find that comedy tended to respond well in this type of visual context; a darker and more serious aesthetic provided a healthy dose of tension to the comedic moments. “Baskets” [and] “Atlanta” are ultimately dark comedies and I found that treating the visuals in a serious way really helped sell the “dark” side of the show. Cinematography plays a major role in the tone of a project. I believe this is why I’ve found myself shooting a lot of pilots; helping design the mission statement for the tone of a series is a great deal of fun and is the result of intense collaboration between the filmmakers — very akin to the process of making a feature film.

I’ve been struck in your work by the quality of scenes shot at night — they have a kind of dreamy immediacy. Is there anything to say about this?

I believe in complimenting the audience’s intelligence, not insulting it. As a storyteller, I want to encourage the audience to participate in the film. If a close-up is lit rather dark, or a scene plays out in a silhouette, the audience has to put in a little extra work to keep up with what’s going on. They are engaged and paying attention, and maybe at the end of putting in that work there’s a good joke that catches them off guard — sounds like a great scene to me! A lot of my night work tends to be quite naturally dark. If I’ve established the aesthetic world of the film to be lit naturalistically, the night work has to follow suit. I’ve been very fortunate to work with filmmakers who share in that philosophy, because it can feel risky for a director to shoot a night scene that is extremely dark. It’s important to work outside of your comfort zone and to always be taking risks. That’s usually how one makes great work and keeps the work exciting to do.

Can you contrast your work on “Station Eleven” and “Reservation Dogs” in terms of how you frame figures in an environment, deep focus in the former versus shallow in the later? What did the two different settings — Chicago versus Oklahoma — inspire or suggest in your approach?

I always want the story and the characters to be the inspiration for how the film or show looks and feels. “Station Eleven” is really a story about a few seemingly insignificant people up against these giant man-made and eventually natural landscapes. A thread throughout the series is that something very significant is happening over there but we’ll just be following this one little story over here. This idea led us down the path of putting our small little characters against these large-scale wide frames — feeling the contrast of scale to significance.

In “Reservation Dogs,” the story isn’t as much one of the physical world the characters exist in, or in contrast to; it’s more concentrated on our main characters struggling with finding their place in their community and their community in American society. To me, this translated more into closer coverage on the people; less emphasis on their backgrounds and more emphasis on their interactions and relationships with others.

When initially conceptualizing the look of “Reservation Dogs,” I was also very inspired by the early 1900s photographer Edward S. Curtis and his work on “The North American Indian.” In part, that work ended up inspiring the look of Bear’s dream sequence when he meets his spirit guide. The aspect ratio changes into a square format and the lensing feels reminiscent of 19th century wet plate collodion photography.

I draw a lot of aesthetic inspiration from the setting of the story. In “Station Eleven,” Chicago is a vast complicated landscape of towering buildings and endless networks of train tracks and traffic. Electric lighting and the harsh winter gives way to a wet, muted, monochromatic pallet. The Creek Nation of Oklahoma inspired the much warmer, more colorful and sunlit world of “Reservation Dogs,” one that nature was slowly reclaiming and returning to its rightful owners.