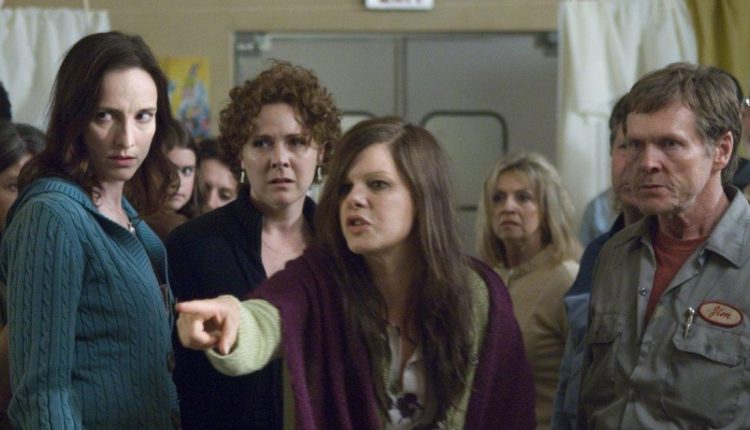 The ability of Stephen King to bring to life our greatest fears is undeniable. He even wrote one of his greatest books about materializing them. There’s no question he knows us to perfection, and he knows where to hit us. Exactly where it hurts.

Yet, King has always gone deeper than the surface of what’s extremely obvious and contemporaneous. He travels to the mundane plane and makes up stories about demons you can actually imagine, see, and practically even touch. Of course, there’s a supernatural element to most of his work, but the drive behind the monsters is often human, and one of his most disturbing human characters was brought to life brilliantly by Marcia Gay Harden in The Mist.

The Power of Belief in The Mist

In his horror novella The Mist, King depicts a town suddenly under attack. Nevertheless, he goes deeper, exploring a more intimate setting. He stays within the boundaries of a small town supermarket, where survivors lock themselves up because there’s a threat outside. That threat is something out of this world and so unlikely, he nearly touches ground on fantasy.

However, as it also happens in King’s massive Under the Dome, the creatures aren’t the only thing that’s menacing. In the aisles, an old religious lady has the power to turn basic human survival into a struggle to stay in a setting of logic and reason.

In Frank Darabont’s big screen version of The Mist, the concept is accurately adapted to be an essential counterpart to the threat of Lovecraftian creatures taking over the world. But Darabont’s script is sharp enough to go beyond genre and make a point about bigotry and religious fundamentalism. But it wouldn’t be as effective without the performance of the insanely good Marcia Gay Harden as Mrs. Carmody.

Related: Here’s Why We’re Excited For These Stephen King Adaptations

Gay Harden’s portrayal of Carmody follows a set of orders Darabont is commonly known for when directing (he’s always in for character-driven stories). The actress embodies exactly what we imagine the character to be when reading King’s work, and today it seems impossible to imagine the religious zealot being played by someone else.

Marcia Gay Harden Plays an Influencer of the Aisles

Upon closer inspection, something becomes very noticeable. Carmody’s screen time is limited, and almost too short. The agency of her character has more to do with an everlasting effect than a feeling of instant reaction when watching The Mist. Seldom do performers accomplish so much with such little screen time. Hannibal Lecter, anyone?

However, Carmody’s insertion in the plot is subtle and extremely natural. Darabont plays his pieces with deftness. In the beginning, her reactions are normal, and the audience even listens to her at some point. But then, she slowly enters her way into the psyche of survivors not only looking for resources, but also for answers, in this darkest of King adaptations.

The Carmody characterization exists because of how much power is born out of desperation and admittance. Perhaps she’s not looking for domination at first, as her agenda is very grounded, considering her realistic peers in modern society. From cult leaders to certain yogis and self-help gurus, these kinds of people exist, and they will go places to spread their message. When Mrs. Carmody realizes she has a grasp, she becomes aware of its wideness and understands how her role may grow.

It’s not that the character is set out to be the leader of aisles, the priestess of those who wander in this claustrophobic trap of hunger and darkness. It’s that the human drive for power is shared among us like the unconscious need to breathe. And once you taste it, you can’t let go. Carmody leads because others follow; she doesn’t look back and reflect on the probably evil side to her agenda. There’s no right or wrong, only the (mis)interpretation of biblical messages that she smartly communicates to the herd following her.

“We Want the Boy”

The few Carmody scenes are enough to elevate her presence in a third act that shows chaos so explicitly; it’s one of the main reasons The Mist is celebrated as a great adaptation of what King writes on a few pages. The cult has been formed, the leader sits comfortably on the throne, and followers will do whatever she asks. It’s the ultimate representation of power and dominance.

Harden’s delivery of her famous line “we want the boy” is not menacing but declarative. She’s so quenched with power, she’s convinced she will get the boy out of his father’s arms. For those who haven’t seen the film, this may be a spoiler, but Carmody is stopped, yet those words have become imprinted in the characters who are making a run for their lives. They know if they stay, they will be killed by the mob and a boy will be sacrificed and, according to Carmody’s prophecy, God’s wrath will be avoided. If they run, perhaps they will live.

Neither King nor Darabond explored what happens in the supermarket once the “survivors” leave. However, as Carmody remains a leader, even in death, it isn’t hard to imagine what she became. A priestess for some, the answer for others, and a goddess for all of them.

What if Carmody’s followers glorified her body while they became consumed by the “End of Times?”

What if there were actually survivors, and they turned Carmody into some sort of god and founded a church in her name?

Power. It’s such a double-edged sword of a concept. And in the hands of King’s fascinating villains, it represents death, an evil which takes a form that’s horribly realistic and tangible considering today’s socially divided society.

The Mist is available to stream on Netflix.

A Hopeful Ending as the Universe Grows