How ‘Conversations With Friends’ on Hulu got endometriosis right 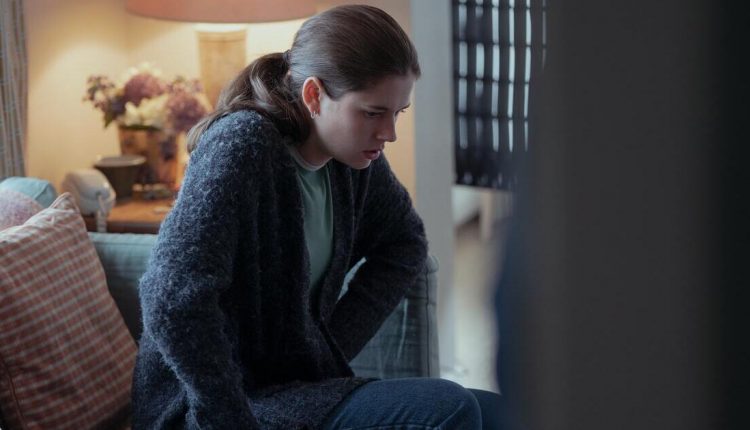 In the sixth episode of “Conversations With Friends,” Frances, the show’s protagonist, doubles over in pain in her mother’s bathroom. As Frances shakes and cries, the camera hovers over her underwear, which are covered in blood, prompting Frances’ mom to speculate that her daughter is having a miscarriage.

As Frances and the viewers learn later, the character suffers from endometriosis, a chronic condition that affects a woman’s reproductive organs and currently impacts approximately 190 million women worldwide. The storyline, which continues throughout the remainder of the series, now streaming on Hulu, was one that everyone involved wanted to get right.

“One in 10 women in every country in the world has it. It’s such a massive thing that so many people deal with. So I did feel a responsibility to portray that authentically and truthfully,” says Alison Oliver, who plays Frances. “The more that I researched it and spoke about it with [the directors], the more we really didn’t want to shy away from the real pain of it. It was important for me to really go for it.”

Much of “Conversations With Friends” hews closely to Sally Rooney’s 2017 novel, which establishes how integral endometriosis is in Frances’ coming-of-age tale. While the primary plot centers on Frances’ relationships with a married man named Nick (Joe Alwyn) and her best friend/ex-lover Bobbi (Sasha Lane), her struggle with her body and her eventual diagnosis are key to understanding her journey. Because of the novel, the producers found themselves with a plethora of resources before writing even started on the series.

“The Endometriosis Assn. of Ireland contacted us to say that, for them, it was a really important book, and they wanted to be available to us and to make sure that if we needed any resources or to talk to anybody, we could,” recalls executive producer Emma Norton. She and other members of the creative team behind the series then held a call with the association and two women who had endometriosis to discuss their experiences with the condition and its medical treatment, which then informed its depiction onscreen.

“Some of the women we spoke to have had really, really brutal experiences, as one of whom was slightly older and had been through the medical system when even less was known about endometriosis,” Norton adds. “You realize the scale of the experience can be so extraordinary.”

For director and executive producer Lenny Abrahamson, who shared directorial duties on the 12 episodes with Leanne Welham, it was essential that Frances’ symptoms and diagnosis be seamlessly incorporated into the overall storyline.

“We thought a lot about how to use it both as a significant aspect of Frances’ experience, which it obviously is, but also: ‘In what ways can it be useful for us thematically?’” Abrahamson explains. “Frances is, in some sense, distanced from herself as a character, certainly at the beginning of the story. She lives very much in her head, and she’s very much removed from the ebb and flow of life. Part of what happens in ‘Conversations With Friends’ is that all these things come to shift her from that position of stasis. She embarks on this very intense and very physical relationship with Nick, which is an overwhelming thing and a destabilizing thing. She gets into a series of conflicts with Bobbi, which really undermines that, because Bobbi is so central to her sense of herself. And the third dimension is that her body itself is shouting at her and saying, ‘Pay attention to me.’ There is this overwhelming thing of Frances being forced to come back into her own body and into her own life in a more concrete, grounded way.”

Although “Conversations With Friends,” like “Normal People,” is a quiet, subtle TV series, it was important to Welham not to shy away from a frank depiction of Frances’ pain in Episode 6. Allowing the audience to see the blood revealed the truth of the moment.

“Being a female director, there’s no world in which I would have not shown the blood, even though we’re still in a world where in period adverts we have to use blue liquid and all these ridiculous ways to deflect from what’s actually happening to women’s bodies,” explains Welham. “I really was keen to show it. It is quite shocking. But the amount of blood that you can get in these episodes [of endometriosis] is a shocking amount.”

Oliver tried the scene a few different ways and ultimately decided to make the pain come through as strongly as possible, mostly because, in that moment, it feels alien to Frances.

“Hopefully for people who do have it or have experienced something, it feels truthful,” the actor says. “I think it’s really scary for people because you have no control over those things. It’s the lack of control. … We didn’t want to shy away from that pain or that fear.”

In the series, as in the novel, Frances mistakes her experience for a miscarriage and goes to the hospital, where she has an awkward encounter with a male doctor. While it’s not necessarily common for women with endometriosis to mistake their symptoms for a miscarriage, many are misdiagnosed, and there is often a lengthy delay — 7.5 years on average — before receiving a diagnosis, according to Dr. Karolina Afors, consultant gynecologist at the Whittington and Portland hospitals in London. Frances’ own diagnosis comes later in the series, after she struggles to be heard by several medical professionals. Having this journey depicted on television, particularly in a fictional drama intended primarily as entertainment, has the potential to help those who suffer from the disorder.

“Educating women empowers women,” adds HealthCentral’s medical reviewer and OB-GYN Dr. Andrea Eisenberg. “Seeing women characters portray the symptoms and consequences of endometriosis allows others to understand the disease they may have. It can also decrease the stigma of pelvic pain as something ‘in their head’ or something they should just ‘deal with.’ Endometriosis is an actual disease process that can be managed.”

While it’s not intentional that “Conversations With Friends” is arriving at the same time that women’s reproductive rights are being threatened in the U.S., the parallel is something the cast and creators have noticed. Overall, the series highlights the importance of putting women’s stories — and pain — in the spotlight.

“Medical structures are used to diagnosing white men, basically, in our cultures,” Abrahamson says. “There’s a lot of other people out there who need the attention.”

“The events in the U.S. are just so shocking and devastating for everybody,” Norton adds. “I hope that [the series] is, in any small way, creating work that keeps an open dialogue, rather than trying to shut things down and hide things away and limit people’s options.”

‘Only Murders’ Season 2: Shirley MacLaine was ‘a complete…