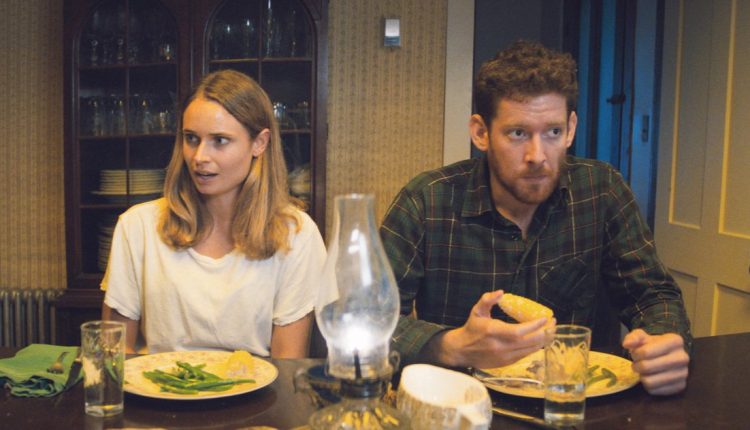 We have a brand new trailer for the upcoming horror/thriller Honeydew. This movie, on paper, has several things going for it. For one, it was a buzzy title coming out of the Nightstream Film Festival. Secondly, it stars Sawyer Spielberg in his feature acting debut. And yes, this is not a coincidence. Sawyer Spielberg is the son of legendary filmmaker Steven Spielberg. Whereas his father made a name for himself behind the camera, the younger Spielberg is making a go at acting. In this case, he’s going to have plenty of screen time to prove himself as this looks to be a tense, minimalistic thrillride.

The trailer opens with what appears to be an attempted theft at an isolated farm in the middle of nowhere. Needless to say, this doesn’t end well for the perpetrator. We then come across a couple driving along a country road before they come upon an unsettling kid. At night, as they are trying to camp, a farmer informs them that they are on his property. Naturally, their car battery is dead so they are left with one option; head to the old farmhouse and ask the seemingly nice old woman for help. Things get progressively strange and unsettling from there. Not that the two were awash with options but they truly wound up at the worst possible place, it would seem.

The cast also includes Malin Barr (Skyscraper) and Barbara Kingsley (Jessica Jones). It was directed and written by Devereux Milburn. It marks Milburn’s feature directorial debut. He had previously helmed shorts such as Stayed For and Wade. Originally, the movie was set to debut at the Tribeca Film Festival. But like many events in 2020, it was canceled. But it still landed a distribution deal following its debut at Nightstream and will arrive later this year for horror fans to see for themselves. Dark Star Pictures president Michael Repsch had this to say about the movie when the distribution deal was struck last October.

“Writer-director Devereux Milburn has expertly crafted a macabre vision oozing with style that will have genre fans and cinephiles salivating for what he brings next.”

Honeydew centers on a young couple (Sawyer Spielberg and Malin Barr). They are forced to seek shelter in the home of an aging farmer (Barbara Kingsley) and her strange son. It’s not long before the couple suddenly start to have strange cravings and hallucinations, which takes them down a bizarre rabbit hole.

Many, many movies from 2020 were pushed to 2021 in the hopes that theaters would be up and running like normal again. That hasn’t happened. So quite a few of the movies that are being released are getting a hybrid release, combining theaters and streaming. This situation will be no different. Honeydew arrives in theaters on March 12 before hitting on demand platforms on April 13. Be sure to check out the new trailer for yourself from the Dark Star Pictures YouTube channel.

An Entertainingly Tenebrous Take on the Survival Road Thriller