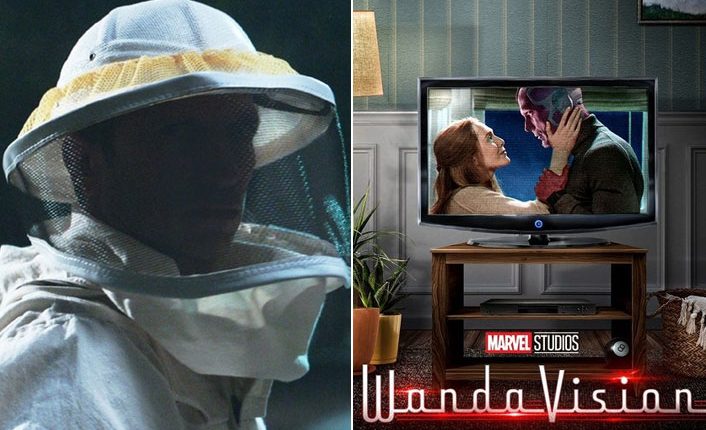 The first two episodes of Marvel’s WandaVision started streaming on Disney + Hotstar yesterday. While the show was received warmly it also left everyone with an unusual feeling due to its sitcom-like feel and also the way it packed some surprises.

Towards the end of the show, we see a Mysterious Beekeeper with the SWORD sign appearing through sewage and taking the pregnant Wanda by surprise. Immediately after seeing him, she reverses the events and adds colours to their black and white life.

Ever since WandaVision has started streaming, this particular event has caught everyone’s fancy. Memes related to beekeeper are trending on Twitter and netizens are having a great time on the microblogging site.

Meanwhile, Director Matt Shakman opened up about WandaVision and the show taking inspiration from classic sitcoms in a recent interview and shared some interesting details.

In a conversation with Variety, Matt said, “because they’re both about people with magical abilities, who are trying to hide them from their suburban neighbours and also trying to fit in and be normal, even though they are not. And that is very much what our show is about, too.”

Matt Shakman was also asked about how the show looks like Pleasantville and why was it made in a 9 episode format. Talking about the same, he said, WandaVision is definitely a puzzle box. It’s a long mystery. And so that’s part of it is leaning in — and just like Wanda and Vision, we’re wondering, “Where are we and how did we get here?” The audience is also wondering that, too. And those answers come as you watch over the nine episodes, I promise.”

Matt also added that it was a chance of innovation for them, “For us, it was a chance to innovate and to explore a part of the world that Marvel hasn’t done before. One of the things I love about Marvel Studios is its risk taking. Kevin (Feige) and his team are always looking for the thing they haven’t done. And it’s that sense of adventure and boldness that I think has brought us things like Guardians of the Galaxy — when you never would have expected something like that after Iron Man or Captain America. They play around with genre, tone, style — (like in) Thor: Ragnarok — in amazing projects. We jumped into these different decades of television and tried to recreate them authentically; this is the reality of that episode and we wanted to make sure that it was as authentic as possible.” he said.

Must Read: WandaVision: Despite Being Highest Rated MCU Property On Rotten Tomatoes, Marvel’s Show Labelled As ‘Watered Down Parody’ Of Sitcoms