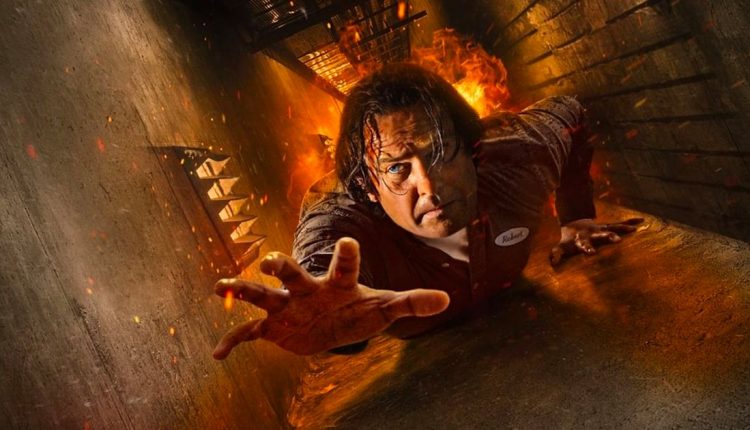 Henry Thomas plays Robert in Crawlspace, a plumber on a job in a remote location underneath a cabin in the woods. Three men enter the cabin while he’s working. He can hear and see them through the floorboards. Two of the men begin questioning and roughing up the other, and before long, Robert has witnessed a murder. The murderers see him back through the floorboards and become set on killing him too. Robert is forced to use his skills as a plumber and the tools that he has at hand to outsmart and defeat them.

Fans of Thomas can recognize him from earlier projects like E.T. the Extra-Terrestrial or Gangs of New York, or for his more contemporary roles like in The Haunting of Bly Manor. Rounding out the cast are Bradley Stryker, C. Ernst Harth, Jennifer Robertson, Olivia Taylor Dudley, Joe Costa, and Catherine Lough Haggquist. It’s directed by L. Gustavo Cooper and written by Jacob D. Wehrman. “I read the script and thought it was like Die Hard and Home Alone underneath a cabin in the woods. It’s fun, it’s kind of comedic at times, and it was an opportunity to do an action thriller. It was also a role that I don’t normally get to play a lot, which is the working-class hero,” said Thomas.

Crawlspace is available now on Digital.

Preparing for Survival in Crawlspace

Crawlspace deals a lot with the element of survival, as Thomas is seen dodging bullets and being shot by a crossbow, all while being taunted by the murderers. As the injuries continue to build in his character, so do the challenges of portraying him.

“I think a lot of this was me reacting to various injuries that are inflicted throughout the course of the story. Robert gets hurt quite a bit by the villains, and in some medieval ways. He gets shot by a crossbow, there are firebombs, and all these horrible things. As far as preparation went, I just tried to be in as good physical shape as I could be. It’s physically demanding when you’re doing these sorts of films because there are a lot of repetitive actions. It doesn’t seem like much work rolling out of the way in a shot, but if you have to do it 20 or 30 times… it can get pretty exhausting after about 12 hours,” explained Thomas. “I think another challenge was some scenes were low sequences, where Robert might be putting together some sort of contraption and talking to himself, and you have to keep those sorts of scenes engaging. You’re relying a lot upon the audience’s involvement… I think the tricky dance is just making the character compelling and keeping the story moving.”

Related: Exclusive: Danny Trejo Talks Green Ghost and the Masters of the Stone

Working With the Cast and Crew

Opposite Thomas in Crawlspace are Stryker and Harth who play the murderous villains. Stryker can be recognized from projects like Cold Pursuit and Animal Kingdom, and Harth can be seen in Capote and Scooby-Doo 2: Monsters Unleashed.

“They were great. A lot of this is isolated, so a lot of the days that I was on set in the basement, Ernst and Bradley were off. But because of off-camera dialogue and things, we would try and go in for each other to give the scenes cohesion. There’s a big difference when you’re hearing it performed the way it’s going to be performed by the actor that you’re meant to be reacting off of instead of listening to a script supervisor or an assistant director read off the page, which is sometimes the case. Sometimes logistically, you have to do that, but we had a great cast… it’s a real team effort when you’re working in a restricted time and with a restricted budget, and it’s great when people step up as they did,” commented Thomas.

Among those people is director Cooper (The Devil Incarnate, Velvet Road), who Thomas had actually met socially before the movie. “So when he approached me and said, ‘I’ve got this film going, I want you to be lead,’ I said, ‘Amazing.’ He was so enthusiastic and ambitious with what he wanted to do with it… He kept things moving and was full of ideas.”

Crawlspace is a production of SP Media Group, Wonder Street, and Front Street Pictures. It’s distributed by Paramount Pictures and is rated R for violence, language throughout, drug use, and references.

Vikram Vedha Remake Has Gone Beyond Its Limited Budget Due To Hrithik Roshan’s This Demand?