‘Hawkeye’ Episode 1: Who are Kate Bishop and Jack Duquesne? 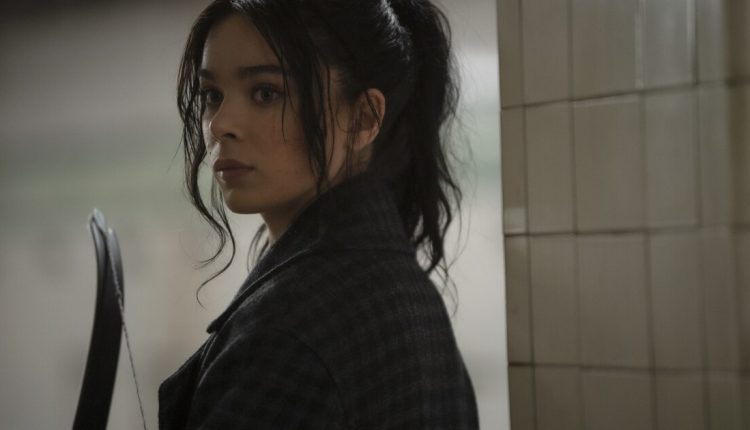 This story contains spoilers for the first episode of “Hawkeye” on Disney+.

Created for television by Jonathan Igla, the six-episode Disney+ series sees retired Avenger Clint Barton (Jeremy Renner) reluctantly pulled back into action after Kate (Hailee Steinfeld) stumbles upon his old Ronin suit. She puts it on (for good reason) and manages to catch the attention of just about everyone in New York, including those who have a score to settle with the mysterious ninja.

Lucky for Kate, Clint, a.k.a. Hawkeye, shows up just in time to save the day. Again.

“Kate is part of this next generation of heroes who grew up in a world with heroes, like Spider-Man,” said Igla. “There are only a couple of them so far and I think that that’s a really interesting bit of psychology to examine.”

As shown in the opening moments of the first episode, Kate not only grew up in a world with superheroes, she also owes her life to them. Kate’s childhood home was destroyed when Loki and his crew rampaged through New York in 2012 (during the events of “The Avengers”) and a certain master archer is the reason she wasn’t among the civilian casualties that day.

By “opening that way, we could see this emotional connection and also understand her place in the MCU as we’ve known it,” said director and executive producer Rhys Thomas. “And understand the effects of those moments on civilians within the MCU. … Kate, she grows up a fan. She’s a fan of the Avengers and a fan of Hawkeye, specifically. So we see [Clint] through that lens with her.”

And unlike some of the first-generation Avengers, Kate’s journey to becoming a hero isn’t by happenstance.

“For Kate, there’s obvious intention to it — she has this aspiration, she has this dream,” said Igla. “This is a young woman [without any superpowers] who is just a good athlete, and [is] really smart and clever and dedicated. What are the ingredients in somebody’s childhood that you put into a blender and spin it around to come out with somebody who is dedicated enough and selfless enough to want to help people the way that she does?”

Set a couple of years after the events of “Avengers: Endgame” (2019), “Hawkeye” also shows that Clint is still dealing with the repercussions of losing his best friend and allies, as well as the joy of having his family back.

“He’s coming off a much darker period in his life where he lost his family,” said Igla. “The fact that they are back is obviously amazing, but doesn’t undo the trauma and the hurt and the fear of having lost them for all that time.”

Marvel Studios’ fourth live-action MCU series, “Hawkeye” sets itself apart with street-level stakes and holiday themes. Unlike most MCU fare, which is loosely inspired by various comic book storylines, “Hawkeye” cites a specific, critically acclaimed comic book run as direct inspiration: “Hawkeye” (2012-2015), by Matt Fraction, David Aja and Annie Wu, about what Clint does when he’s not being an Avenger. (Fraction is credited as a consulting producer on the show.)

“Everybody at Marvel was really enthusiastic about that run and loved the tone of it, so there was a real desire to get the feel of that comic book into the show,” said Igla. “One of the real fun challenges of the show was finding way to marry Clint, as we’ve gotten to know him in the Marvel Cinematic Universe, with the way that he is depicted in those comics.”

What else should we know about Kate Bishop?

Kate Bishop made her comic book debut in a 2005 issue of “Young Avengers” by Allan Heinberg and Jim Cheung, as a teenage socialite held hostage along with all the guests at her sister’s wedding. After helping the Young Avengers in their nearly-botched attempt at a rescue, she basically forces her way onto the team and eventually, officially, inherits the code-name Hawkeye. (Clint was dead at the time, but in true comics fashion he eventually returns.)

Like her TV counterpart, Kate doesn’t have superpowers but is resourceful and is skilled in archery, fencing and hand-to-hand combat. When Clint returns (as Ronin), she earns his respect and his approval to keep using the Hawkeye name and his bow. Even after Clint resumes going by Hawkeye, he encourages her to keep using the name because the world is big enough for two Hawkeyes.

Kate joins a number of MCU characters who have been associated with the Young Avengers in the comics, including “WandaVision’s” Billy and Tommy, “The Falcon and the Winter Soldier’s” Eli, “Loki’s” Young Loki and “Ant-Man’s” Cassie Lang. America Chavez, who will be introduced in the upcoming “Doctor Strange in the Multiverse of Madness,” has also been a part of the Young Avengers.

What’s the story behind “Rogers: The Musical”?

“Hawkeye” audiences first get a glimpse of Clint attending a performance of “Rogers: The Musical,” a musical adaptation of events from his real life.

“We were trying to think of, what’s a fun way to meet Clint and [see] where he is?,” said Thomas. “So my brain just got to thinking about the last place that Clint would want to be and an image of Jeremy Renner’s face sitting in a darkened theater, unamused, watching a version of himself on stage, reenacting one of these traumatic moments from his life, just immediately felt really funny to me.”

When Thomas pitched his “silly idea” at a meeting, Marvel Studios president Kevin Feige jumped on it.

“I immediately tried backtracking on it because … suddenly, all the ramifications of actually making a musical of the MCU sort of hit me,” said Thomas.

Who is Jack Duquesne and why is he so into swords?

Another new character introduced in the series is Kate’s stepfather-to-be, Jack Duquesne (Tony Dalton), who seems to be really into swords. Jack is the MCU version of Jacques Duquesne, a.k.a. the Swordsman, a comic book villain first introduced in the pages of “The Avengers” in the 1960s.

As his alias implies, he’s a master swordsman, and in the comics, he’s primarily known for his affiliation with Clint. Duquesne took in a young Clint and taught him everything he knows about bladed weapons. His depiction has moved between villain and vigilante over the years, but it’s probably in Kate’s best interest to keep an eye on him.

Were those criminals in tracksuits?

First seen crashing the black market auction before jumping Kate because they believe she’s Ronin is a gang referred to as the Tracksuit Mafia. Their signature attire and overuse of “bro” is pulled directly from Fraction and Aja’s “Hawkeye” run, where the group, known as the Tracksuit Draculas, were recurring villains intent on taking Clint down.

A character highly anticipated by fans of the Fraction/Aja “Hawkeye” run is Lucky the Pizza Dog. In the first issue of that “Hawkeye” run, Clint rescues a dog after a scuffle with the Tracksuits and ends up taking him in and renaming him Lucky (the dog’s original name was Arrow). The run’s acclaimed “Hawkeye” No. 11 is told strictly from Pizza Dog’s perspective, where he proves he has a nose for detective work.

In the show, Kate is the one that rescues a dog from traffic. Though she’s resistant to claim him as her dog, we soon learn pizza is his business.

“I think this is an important starting point for her because dogs are a lot of responsibility,” said Igla. “This was a small way in which I wanted to highlight some of the the reality of the world that they live in. It is a world with alien invasions and superpowers, but even in a world with alien invasions and superpowers, you still have a responsibility to take care of a dog if you end up taking in a dog.”