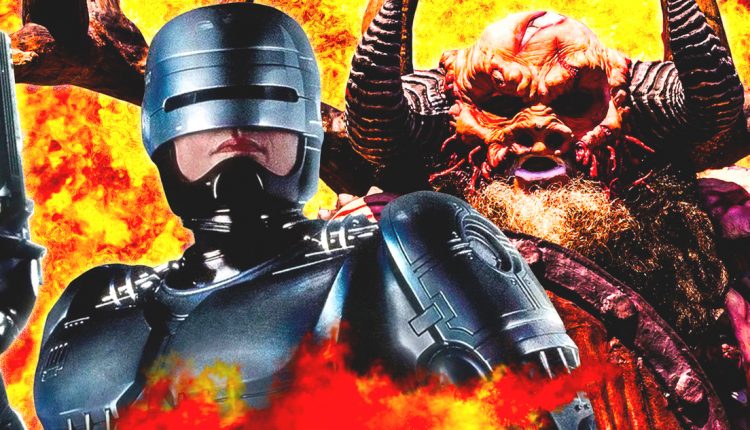 Naturally, the self-proclaimed berserker who rules GWAR is a huge fan of RoboCop. Campy violence, biting social commentary, science fiction, and enduring one-liners are hallmarks of both the action classic starring Peter Weller and the metal band, whose breakthrough Scumdogs of the Universe album celebrated its 30th anniversary in 2020. Michael Bishop first joined GWAR in 1987, the same year RoboCop was released, as bassist Beefcake the Mighty. In 2014, following the untimely passing of cofounder Dave Brockie aka Oderus Urungus, Bishop returned to the group as new lead vocalist Blöthar The Berserker. (In the band’s mythology, Blöthar made the journey from Scumdoggia to Earth to reign over GWAR and their Slave Pit.) Blöthar shared his love of director Paul Verhoeven’s dystopian classic on a recent episode of PopCurse, presented by Movieweb, which features musicians talking movies. A partial transcript of the podcast, edited for length and clarity, follows.

I should tell you that I had my first kiss at a GWAR concert.

Blöthar The Berserker: Oh, geez. Wow. This must have been traumatic. What did you kiss?

A female friend. This was at the Howard Johnson’s hotel, in a ballroom, in Indianapolis, Indiana. I believe GWAR would have been touring on the first album, Hell-O!, on Shimmy Disc Records.

Blöthar The Berserker: A Howard Johnson’s in Indianapolis, Indiana? Sounds like a time period when I might have been contemplating suicide. I remember we had a great manager back then, Bill Levine, he was from Indianapolis. Any manager that has an 8×10 of them in a junkyard with some girl, which he did, you know [is] a first-class individual.

Indianapolis isn’t far from the near-future wasteland of Detroit, Michigan. When, where, and how did you first encounter the fantastic piece of American cinema that is RoboCop?

Blöthar The Berserker:RoboCop was a very, very huge movie in the pantheon and development of GWAR. I think that the first time I saw this movie, it was in an empty movie theater, and I was tripping on LSD. Sleazy P. Martini [aka Don Drakulich] at the time had a side gig as a projectionist at the movie theater. We went in there, with dates, at the end of an LSD trip, and watched RoboCop alone in this big old sort of art theater. And it made quite an impression. It was one of those second-run movies.

You know, I didn’t watch RoboCop when it came out, because – part of the brilliance of that movie was the way that it was marketed. It was marketed as sort of just another dumb action film, like all of the action films that were being released at around that time. So, I was like, ‘Oh, this is not something that I’m gonna want to see.’ And then when you actually went to see the film it was sort of a modern-day Frankenstein that was just filled with meaning and a wonderful movie that showed a very grim picture of the American future.

It looked like another “cold-blooded law enforcement agent walks around shooting bad guys” type of movie, which has its appeal. Or perhaps a Terminator type of movie…

Blöthar The Berserker: I didn’t have Terminator hopes for it, looking at those ads. I guess Verhoeven would do something kind of similar with Showgirls, the way that it was advertised. Talk about being cynical about Americans! It was [marketed as] just so lowest common denominator. I was thinking that I was going to walk into Terminator. I thought I was gonna walk into something with a lot less depth.

I understand from what I’ve read that the Judge Dredd comic book was an influence on RoboCop, as was Blade Runner. I would imagine those are things that you love as well.

Blöthar The Berserker: Absolutely. GWAR [has] our own universe that we spin around in and those worlds, those storylines, those narratives, those realities, have been very important and figured very huge in the origins of GWAR. A general interest in comic book culture; Judge Dredd in particular was a big influence. And yes, of course, we love Blade Runner. And all of the novels and stuff like that were things that we read and paid attention to. I remember being bitterly disappointed by Blade Runner and later thinking, ‘Ah, Ok, it was a decent film.’

I grew up into sci-fi, horror, comic books, punk rock, and heavy metal, which is why I fell in love with GWAR. Like, ‘Oh, this is a band designed for me.’ There were us weirdos out there that were haunting the record shops and haunting the comic book shops.

Blöthar The Berserker: Oh, yeah! That’s us! That’s what we were doing. ‘Weirdos haunting comic shops and record shops.’ A very good description of a certain side of GWAR.

I love the Frankenstein comparison that you make. Life, consciousness, technology, those are big themes in that movie, themes you wouldn’t expect a movie called RoboCop to venture into.

Blöthar The Berserker: You’re right. Absolutely. And that’s what made me love it so much. Also, in addition to being filled with just sort of the most gratuitous violence at times in the film, which was certainly a reason to like it. And a big surprise, too! It’s not exactly Frankenstein, but it has that element of bringing something sort of unwilling or at least partially unwilling, bringing this subjectivity into the world that might not have wanted to be there, through technology and playing God and raising the dead, all of those themes that they’re definitely in that movie. But in addition to that, you have the horror of that opening where he is killed so terribly. I just remember that, especially being in a theater. RoboCop is a movie that we watch on the GWAR bus every single tour, that’s not an exaggeration. It’s always riding with us, and we always watch it, and it picks up meaning as it goes along. I do love that aspect of it and sort of the elements of Gothicism that he works in there.

Things wouldn’t expect to see in what ostensibly appeared to be another eighties action film.

Blöthar The Berserker: Yeah! And you scratch the surface and you’ve got this whole thing about a policeman, you know, the police element was huge in it. It was rife with anxiety about technology, which is just a sort of classic Gothic trope. And also, the barrier between life and death, what carries over or what might not carry over; the possibility of subjectivity living in machines, which is something that’s a reality now, the idea of transhumanism. I’m sure that there are much earlier examples, but this movie was a mainstream playing out of those themes: humanity being something more than what we are, but it’s dangerous to be that thing, to be that mix of humanity and technology.

When you hear people theorizing about the possibilities of having the capability to, say, for someone like yourself – where there’s a lot of recorded interviews, performances – that all of that stuff could be collected after your physical body is gone and you could be recreated. Would that thing be you? Would it think that it’s you? I love tripping out about all of that sort of stuff.

Blöthar The Berserker: [Laughs] Exactly. You could imagine how suddenly I think it becomes more meaningful [with] the LSD trip in the empty movie theater.

Arnold Schwarzenegger and Rutger Hauer were reportedly considered for the lead role.

Blöthar The Berserker: I didn’t recognize [Peter Weller] and I liked that I didn’t know that face. And the face is so important in the film. The body becomes much less important. The face is the one thing, besides his subjectivity which they bury behind a network of objectives, the face is the classic connection between subjectivity and the outside world. It’s always been very striking to me, the scene where his face, that’s all that’s there. When they show him without the visor, it’s just that face. When you think about it, it’s very impractical. Why would they go out of their way to preserve the face?

Let’s talk about the boardroom massacre.

Blöthar The Berserker: The boardroom massacre, I remember it well.

I thought that you might [laughs]. It reminds me of that Howard Johnson’s performance.

It’s a very grim scene. I love the layered bad guys, too. It’s not just one bad guy. Who is really the villain in this thing? Most movies have a hard time identifying one, good, solid villain. In this movie, you basically have three of them, at least, and then you have henchmen. You have the classic [Ray] Harryhausen style animation. You just aren’t going to find that anymore. I mean, it instantly reminds me of [1958’s The 7th Voyage of] Sinbad, when that monster comes out. If you pay really close attention, when he falls, you just hear pigs squealing.

The rest of the wide-ranging RoboCop conversation get into GWAR’s early experiences in Detroit, the movie’s commentary on law enforcement, Colonel Sanders, and more. Listen to the full conversation and other episodes featuring musicians talking movies right here at PopCurse.

Chase Away the January Blues with Elaine Paige on Sunday! | Srtalent