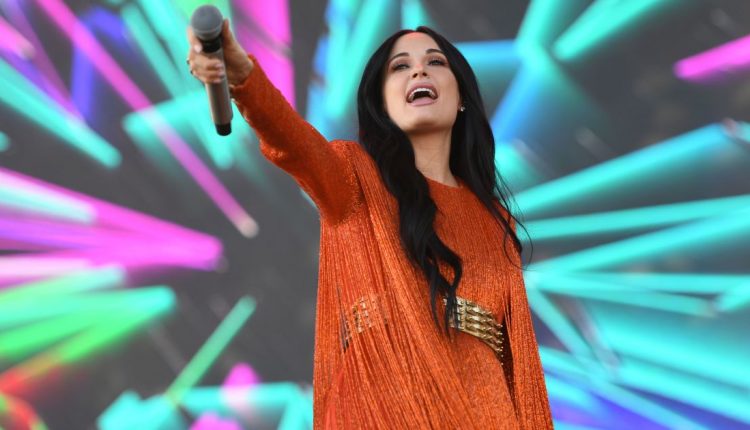 The Recording Academy found itself in recognizably hot water this week when word got out that the industry group had barred Kacey Musgraves’ “Star-Crossed” from consideration in the country album category at the 64th Grammy Awards set for Jan. 31.

In a widely shared letter from Cindy Mabe, president of Musgraves’ record company Universal Music Group Nashville, to academy chief Harvey Mason Jr., Mabe argues that “Star-Crossed‘s” exclusion — ostensibly on account of its not being country enough — is unfair because the decision was made in part by people who stand to benefit from it.

The people she means? Country artists (and members of their teams) more likely to be nominated for country album without the acclaimed Musgraves as a pesky competitor.

Mabe’s complaint about a conflict of interest evokes the Weeknd’s calling the academy “corrupt” after he failed to pick up a single nod at the latest Grammys ceremony — public criticism that helped push the academy this past spring to eliminate the secretive nominations review committees that for years oversaw, and sometimes amended, voters’ choices for big prizes like album, record and song of the year.

The committee under fire now is the country screening committee, one of several small groups of unspecified experts the academy still convenes to determine whether certain albums or songs qualify for certain specialized genre awards. The idea of those groups is to ensure that the recordings vying in the traditional R&B performance category, for instance, truly represent that style.

Clearly, though, the same problems of politics apply. A Grammy nod can lead to a Grammy award or a performance on the telecast, both of which can lead to a lucrative boost in sales and streams; Musgraves, a proven Grammy fave, was sure to be seen by some in the room as an obstacle to that payday.

Beyond whatever machinations were involved, the academy’s call regarding the pop-leaning “Star-Crossed” raises larger, more complicated questions about how genres are policed — and by whom — at a moment when many of the old lines have blurred. (An academy spokesperson didn’t respond to an email asking whether the committee’s decision was final. First-round Grammy voting is due to begin Oct. 22.)

In her letter, Mabe points out that Musgraves made “Star-Crossed” with the same creative crew that made 2018’s “Golden Hour,” which won Grammys for country album, country song and country solo performance in addition to the overall album of the year award. “Sonically, it’s got more country instrumentation than ‘Golden Hour,’” she adds of the more recent LP — a subjective characterization, for sure, but a suitable one for the academy’s intrinsically subjective process.

According to the group’s rulebook, the Grammys’ country categories are open to “recordings that utilize a stylistic intention, song structure, lyrical content and/or musical presentation to create a sensibility that reflects the broad spectrum of country music style and culture.”

Yet Mabe also frames the issue in moral terms, telling Mason that removing “Star-Crossed” from the country album category “actually does harm to a format struggling with change and inclusivity.” Her argument is that country music needs artists such as Musgraves, an outspoken woman with progressive social views, as a kind of counterweight to the likes of Morgan Wallen, who became a hero to the anti-cancel-culture brigade after he was caught on video using the N-word early this year.

“THIS IS NOT ALL THAT WE ARE,” Mabe writes, referring to Wallen and the fans who pushed his music to new commercial heights even as some in the industry sought to deplatform him.

But does country music actually want Kacey Musgraves? As an institution, the genre is shaped to a large degree by country radio, which historically has shown little interest in Musgraves’ music. (Her highest-charting song on Billboard’s country airplay chart is still her debut single, “Merry Go ’Round,” which peaked at No. 10 in 2013.) Mabe says that SiriusXM’s the Highway channel is playing “Star-Crossed” and that streaming platforms classified the album as country.

But that’s a bit like claiming that a new potato chip is beloved by America because it sells like crazy at Whole Foods.

Grammy committee members’ rejection of Musgraves’ new music, which chronicles the end of the brief marriage she sang about beginning on “Golden Hour,” may be a response to its rollout. With splashy performances on “Saturday Night Live” and MTV’s Video Music Awards and an arty short film à la Beyonce’s “Lemonade,” “Star-Crossed” arrived much more like a pop record — or a Taylor Swift project — than a country release, which likely led more provincial Nashville types to conclude it wasn’t meant for them.

After all, appearances matter deeply in country music: Think of the academy reportedly rejecting Beyoncé’s “Daddy Lessons” from country consideration in 2016 or of Billboard famously ruling Lil Nas X’s “Old Town Road” ineligible for its country chart in 2019. Few would describe Beyoncé and Lil Nas X as country acts. Yet the stereotypical notion of what a country act looks like — which is to say, not a Black woman nor a Black gay man — made it hard for some to hear that “Daddy Lessons” and “Old Town Road” are definitely country songs.

The same is true of other genres, of course. When Tyler, the Creator submitted 2019’s “Igor” to the Grammys, he was hoping for a nomination in a general category but ended up winning the rap album prize despite “Igor’s” general lack of rapping; Justin Bieber complained last year that his “Changes” was nominated for pop vocal album instead of an R&B award. Both men were categorized according to their established identities, not the actual sound of the music in question.

In a sense, Mabe in her letter seems to want the opposite for Musgraves, who lives in Nashville and records for a country label (though in an obvious crossover bid the label teamed with Interscope to release “Star-Crossed”). She’s suggesting that a country identity is less an aesthetic matter than one of background or philosophy — that the singer should still be recognized as a country artist even if “Star-Crossed,” which is long on synths and programmed beats and entered the Billboard 200 at No. 3, doesn’t really sound like a country album.

On Twitter on Wednesday, Musgraves posted a picture of herself as a kid wearing a cowboy hat and wrote, “You can take the girl out of the country (genre) but you can’t take the country out of the girl.”

And indeed “Star-Crossed” has its rootsy moments, including the stripped-down “Camera Roll,” which in a confusing twist reportedly passed the screeners’ test for consideration in the Grammys’ country song category. Yet Musgraves’ “musical presentation,” to use the academy’s ambiguous terminology, consistently emphasizes textures and attitudes from outside country music’s core.

Basically, this is a mushroom-eating album, not a whiskey-drinking one.

To the average listener, these fought-over distinctions are probably of no great concern; Musgraves’ music simply exists — like Tyler’s and Bieber’s and Beyoncé’s — in a boundary-less streaming ecosystem where everything is mixed up with everything else.

But what would gatekeepers do if they didn’t have gates to keep?

‘Dopesick’ on Hulu carves Sackler name into Wall of Shame