Grammys 2022: BTS scores only one nomination 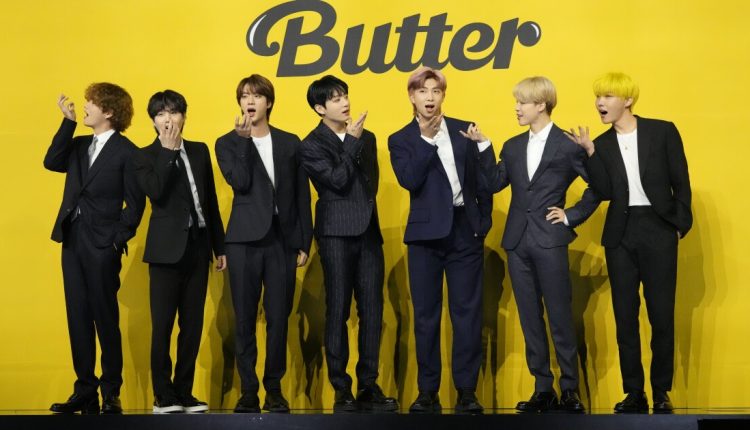 Even after releasing three No. 1 singles this year, global pop sensation BTS received only one nomination for the 2022 Grammy Awards.

For the second time, the South Korean boy band received its sole nomination for pop duo/group performance. The group’s monster hit “Butter” is nominated alongside Tony Bennett and Lady Gaga’s “I Get a Kick Out of You,” Justin Bieber and Benny Blanco’s “Lonely,” Coldplay’s “Higher Power” and Doja Cat and SZA’s “Kiss Me More.”

During Tuesday morning’s livestream announcing the 2022 nominees, BTS was excluded from the coveted record and song of the year categories, even though “Butter” spent a whopping 10 weeks atop the Billboard Hot 100 chart.

BTS’ “Permission to Dance” also peaked at No. 1 on the Hot 100, as did the collective’s popular collaboration with Coldplay, “My Universe.”

BTS landed a nomination last year in the pop duo/group performance category for the chart-topping 2020 track “Dynamite.” Presented in March, that award ended up going to Lady Gaga and Ariana Grande’s “Rain on Me.”

“Nobody could have ever bet on the odds of us standing here receiving this award, except y’all, Army,” BTS’ RM said, using the nickname for their legions of fans, while accepting the AMA for artist of the year.

“Seven boys from Korea, united by a love for music. … This whole thing is a miracle.”

This weekend, BTS will kick off the first of four highly anticipated shows at Inglewood’s SoFi Stadium. Their concerts on Nov. 27, Nov. 28, Dec. 1 and Dec. 2 will mark the first time the superstars have performed before a full crowd of fans since before the COVID-19 pandemic.