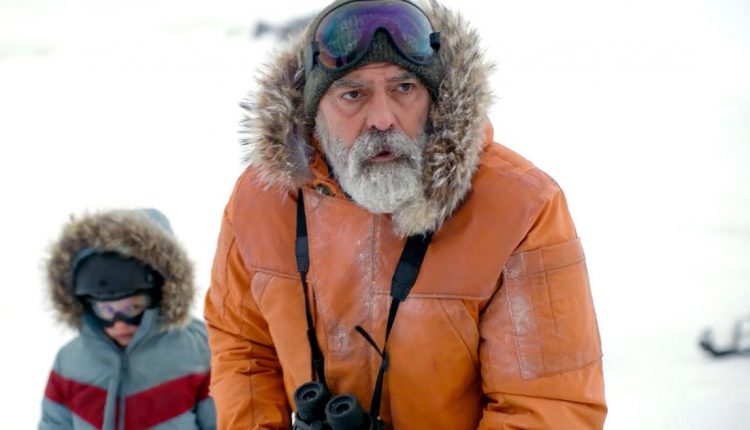 George Clooney pulls double duty as lead actor and director of sci-fi epic, The Midnight Sky. Based on the novel by Lily Brooks-Dalton, the film follows a terminally ill scientist and returning spaceship in the aftermath of an apocalyptic event on Earth. The Midnight Sky has impressive production values, but fails to be compelling despite a serious dramatic effort. The plot is predictable with several obvious plot twists. Also, the stellar ensemble cast gets bogged down by pacing issues. The result is a good-looking film that aims high, but doesn’t achieve its desired gravitas.

The Midnight Sky opens with a frenzied evacuation at an arctic research station. As the scientists race to escape an unnamed cataclysm, Augustine Lofthouse (George Clooney) refuses to leave. He monitors humanity’s dwindling radio signals as survivors try to hide from impending doom. Augustine’s lonely schedule of medical treatments and nausea is interrupted by a shocking surprise. He finds a young girl, Iris (Caoilinn Springall), has been accidentally left behind.

Meanwhile in space, the Aether is en route to Earth after a successful mission near Jupiter. The astronauts have confirmed that a newly discovered moon is indeed habitable. Commander Gordon Adewole (David Oyelowo) and his navigator, Sully (Felicity Jones), have not been able to contact anyone on Earth. The crew (Demián Bichir, Tiffany Boone, & Kyle Chandler) are eager to return home after their long mission. In the arctic, Augustine and his new companion try desperately to warn the ship.

The Midnight Sky tries to address heady themes artfully. It’s a good effort all around, but unsuccessful as a whole. George Clooney wants to juxtapose humanity’s self-destruction on a macro and micro level. Each character must face the awful realization that everything they cherished is gone. But also embrace the Aether and the Jupiter moon as the only viable survival strategy for our species. This ambitious agenda only works if the right moments have depth. The Midnight Sky spends too much time spreading the wealth. When every instance is severe, the effect of those scenes wane as the story progresses. The film unfortunately becomes tedious in this regard.

The technical aspects are first-rate. George Clooney’s experience working on Gravity is clearly evident in the stunning space cinematography. The level of detail is truly remarkable. From cool-looking lens flare to zero gravity blood spurts, you can see where the big-budget money is spent. The problem is that the eye candy doesn’t rescue the narrative. That’s a major failure which cannot be ignored. The Midnight Sky loses interest despite the good work behind the camera.

My final point concerns the easily apparent climax. The Midnight Sky builds up to an important reveal. Anyone paying attention will sniff it out halfway through. That’s disappointing and undercuts the film’s entertainment value. Clooney and his ensemble clearly try their best, but it’s unfortunately not enough to recommend. The Midnight Sky is produced by Anonymous Content, Smokehouse Pictures, and Truenorth Productions. The film will have a limited theatrical release before premiering December 23rd globally on Netflix.