‘Generation Q’: Why controversy came to ‘The L Word’ again 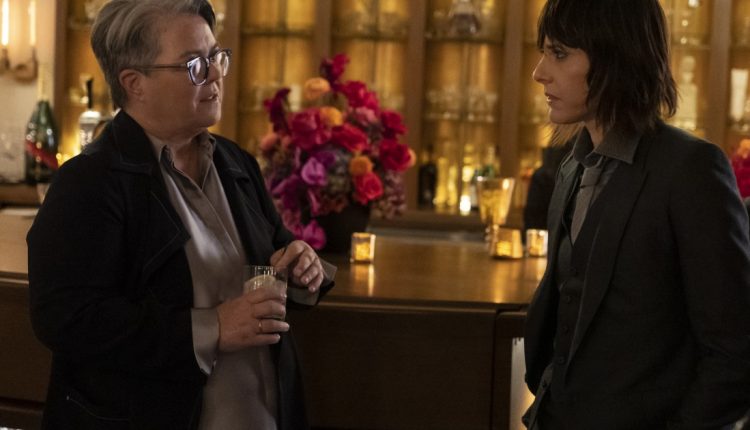 “There’s no reason we can’t all get along … at separate tables.”

Shortly after hearing this comment in Season 2 of “The L Word: Generation Q,” Carrie (Rosie O’Donnell), a self-loathing caricature of a messy fat butch, stands drunk under an umbrella held up by her friends Shane and Tess. Carrie, her suit ill-fitting and face soaking wet from tears, slurs her words as she asks the two of them if she is good enough.

“People,” she blubbers, losing her balance, “have always thought that I’m a problem.”

The “problem” of the butch, or gender non-conforming members of the lesbian and trans community, has been something “The L Word” has struggled with since it first let prime-time audiences in on the way that lesbians lived and loved in Los Angeles back in 2004.

“The L Word: Generation Q,” a reboot of the original Showtime series, is positioned as a modern update of the original, and its diverse cast constitutes an important step for queer representation on television. But this season has raised more criticism, questions and confusion than perhaps any in the franchise to date: the optics of representation can only do so much when narratives are one-dimensional, fractured or guided by outdated tropes.

Let me assure you I am an “L Word” superfan. I used to run to Blockbuster to get the DVDs on their release date and have seen every episode multiple times. I had a razor-cut mullet for 10 years because of Shane — and Tegan and Sara’s “The Con” if we’re being fully transparent. I’m not here to cancel it, kill my idols or persuade you not to watch. Like most fans, I love to sit in the rare space between lesbian nostalgia and emergence promised by “Generation Q.”

But I am also with the discourse that has moved, over the last 10 weeks, from excited to bewildered to upset, with numerous fans calling the show unwatchable. “To L and Back: An L Word Podcast” has described the recent implosion as hitting not “like a bang, but with a deeply confusing whimper.” Lesbian Instagrammer Maddy Court, who keeps a weekly blog about the series, has called the plot lines “sudden and half-baked,” and one commenter referred to their attachment to “Generation Q” as akin to “trauma bonding.”

Indeed, many of the pitfalls of the old series persist, and are simply tweaked for a new generation. Shane’s brief visit to a Black lesbian poker club run by a stud named Eddie (played by Lena Waithe) may remind viewers of Alice’s awkward and problematic stint chasing Papi through bars and clubs in a pre-gentrified East L.A. shot from a painfully white gaze. After Shane is ejected from Eddie’s poker club, she appropriates the idea. Eddie and her club appear in only one episode, serving as a snappy vignette for writers to include the word “reparations” without a substantial nod to why this conversation is timely and relevant. And though the series is clearly tackling the original’s biphobia by giving Alice a cisgender, heterosexual male love interest, framing a Black man as bumbling, smelly breathed and willing to put up with Alice’s shame and indifference toward him is hardly progress.

Similarly, “The L Word” has a legacy of hostility toward butch, gender non-conforming, and transgender characters, most notably Max. Played by trans and nonbinary actor Daniela Sea, Max is initially presented as a working-class butch, the antithesis of the corporate femme-centric world of “The L Word.” After transitioning he is framed as a violent cautionary tale, and a caricature of everything to hate about masculinity. In an interview with Autostraddle, Sea addressed being falsely represented as a cisgender actor to mark a legible narrative of progress for “Generation Q,” and the painful journey of attempting to bring humanity and intervention to their deeply flawed character. (Although there are multiple trans actors this season, including Jamie Clayton, Isis King, Sophie Giannamore and Leo Sheng, there are currently no genderqueer or nonbinary characters — a major shortcoming when looking at contemporary lesbian and queer communities.)

Which makes it so disappointing that Carrie, the first recurring fat butch character in the series’ history, is not written to be liked. Instead, we learn to perceive her as a depressed lesbian with working-class roots through her interactions with food. She tactlessly barrels into a friend’s kitchen going on about her Groupon for Vietnamese baked goods; her voice is needlessly edited into a scene interjecting “I’m so hungry” into a private conversation in another room; and she uses the alibi of attending Overeaters Anonymous to mask her alcoholism, which lands like a joke. And it’s not just that these scenes are classist and fatphobic in their own right. Like Carrie, Finley, who stands in for butch with the younger guard, is framed as painfully incapable, drunk, even potentially dangerous.

Lesbian tropes like those embodied by Finley and Carrie have a long tradition in Hollywood film and television — which has often portrayed homosexuals as sad, lonely, monstrous or dying — and old publishing houses — which would only print and distribute lesbian pulp novels if they ended badly. Deviant lesbians, especially butches, would always undergo some calamity or consequence that would break their heart, spirit and relationships. Butches and transgender people continue to shoulder the burden of this legacy.

The original franchise was flawed, but it directly participated in, and saw itself in dialogue with, lesbian pop culture and taste, which is part of why it felt so real to queer viewers. Guests from Sleater-Kinney to Snoop Dogg made appearances, and if the fandom had a love/hate relationship with the show’s house band, Betty, they at least gave us something to roll our eyes at within the context of a creative lesbian community that felt aware of its campiness. By contrast, “Generation Q” uses music, and most events, to punctuate its nostalgia, celebrating and seeing the now through the past with a karaoke party, a book release, a visit to the California Arts Center. In this universe, lesbians and queer people don’t go to concerts, but to campaign fundraisers; they attend protests, but only for cosmetic causes. As one character asks, “[Is] it possible to burn things down, but leave some things standing?”

What exactly is “Generation Q” trying to tell us about contemporary queer and lesbian identity? This show feels more like a nostalgia franchise in the vein of “Cobra Kai” than fresh queer content. In this universe, no matter who characters are, they can only kiss, think and dream in the footsteps and shadows of the original.

It’s not “The L Word’s” fault, of course, that lesbian representation on TV is so low, which shifts a heavy burden onto the show. But at times, the perspective of “Generation Q” feels like squinting to look through the veil of Shane’s dated bangs: choppy, with big blind spots. In the words of my friend Bree Tomás, “it’s trash, but it’s our trash,” and queer communities in 2021 have high expectations for our trash. We, and Rosie O’Donnell, deserve better.