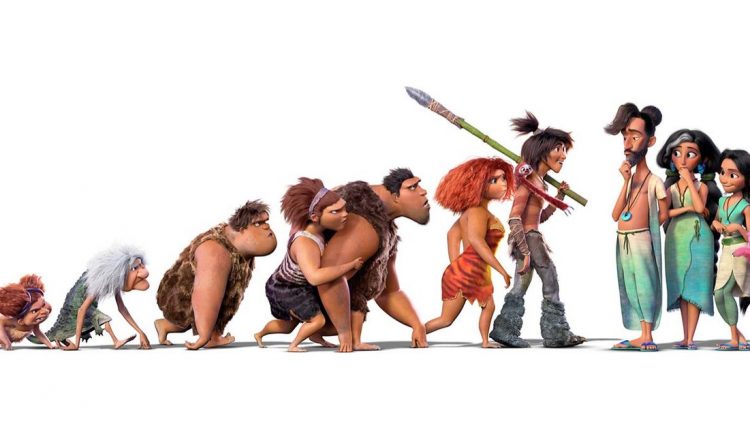 The Croods return to theaters in a funnier and more entertaining sequel. The Croods: A New Age has the CGI prehistoric family searching for a new home. They find another family living in a resplendent paradise, but soon learn that everyone is not welcome with open arms. Each character gets a moment in the spotlight with a healthy dose of equal time comedy. There are several running gags that surprisingly get better as the film progresses. Adults and kids alike will get a much needed infusion of good-natured humor this Thanksgiving.

The Croods: A New Age opens in the past with a montage of how Guy (Ryan Reynolds) lost his parents. Now a beloved member of the family, despite Grug’s (Nicolas Cage) grumblings, The Croods search desperately for their “tomorrow” home. The journey is a perilous one with all types of creatures attacking them at whim. The danger brings them closer together, especially Guy and Eep (Emma Stone). Their burgeoning romance leads to thoughts of the couple starting their own pack.

RELATED: The Croods 2: A New Age Wins Third Box Office Weekend in A Row with $3M

Grug discovers a bountiful utopia hidden behind a gigantic defensive barrier. The Croods stuff their faces, dance, and rejoice. Joy turns to shock when they meet the inhabitants. The Betterman’s, Phil (Peter Dinklage), Hope (Leslie Mann), and their daughter, Dawn (Kelly Marie Tran), are a sophisticated prehistoric family with a superiority complex. Phil and Hope are disgusted by their dirty, smelly, and ill-mannered cave brethren. They do see a bright spot in Guy, who would be a perfect match for their lonely daughter. As Ugga (Catherine Keener) bristles at the Betterman’s snobbish attitude, Grug and Phil find common ground on separating Eep from Guy.

The Croods: A New Age does a great job of keeping the laughter flowing. The film has no down beats. There’s always something goofy, whether sight gigs or scripted, that gets a chuckle. The Croods trying to fit in with the Betterman’s contemporary, upscale lifestyle is knockdown funny. The social disparity between the two households leads to Ugga and Eep realizing that “cave people” is an insult. Phil and Hope’s condescending behavior is a stealthy lesson in class discrimination. The Croods show the Betterman’s that knowing how to flush a toilet doesn’t mean you’re a better person.

The romance between Eep and Guy is handled in a thoughtful way. Guy’s embrace of the Betterman’s lifestyle makes Eep feel unworthy. The film addresses low self esteem issues without being preachy. It’s also refreshing that Eep and Dawn are not adversaries. Dawn is desperate for friendship. She finds a bestie in Eep that brings her out of her shell. The Croods: A New Age never lingers in acrimony.

The supporting characters get the lion’s share of the laughs. Thunk (Clark Duke) and Gran (Cloris Leachman) steal the show. Thunk’s feeble mind is blown to smithereens by a standard feature of the Betterman’s tree house. It’s a gimmick that never gets old. Also, Gran has several ass-kicking surprises in her arsenal. She rallies both families in a hilarious climax. The filmmakers get top marks for spreading the comedic wealth.

The Croods: A New Age is a marked improvement over the first film. It’s better written with a more complex storyline and fantastic new characters. Families are going to gobble this sequel up on Turkey Day. Devo frontman, Mark Mothersbaugh, gets a nod for his uplifting score and soundtrack. The Croods: A New Age is a production of DreamWorks Animation. The film will have a major theatrical release from Universal Pictures on November 25th.