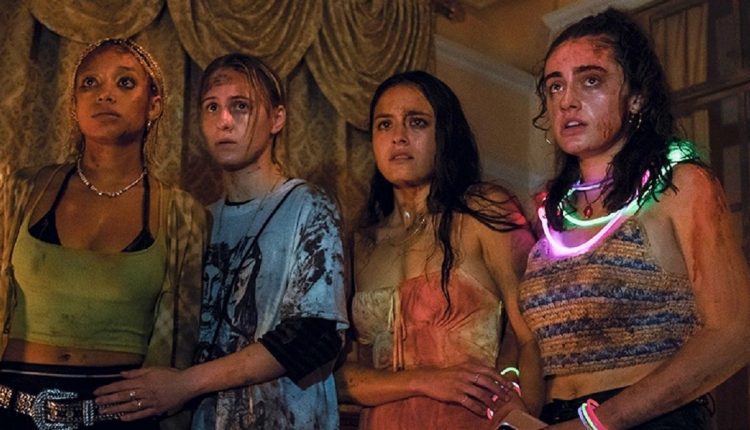 Gen Z rich kids unleash a murderous chain of events while mansion partying during a hurricane. Bodies Bodies Bodies takes a darkly comical swipe at a social media stoked culture of privilege, partying, political correctness, and of course, unbridled narcissism. The film adeptly uses slasher genre tropes to fuel a clever mystery that surprises until the last minute. I laughed hysterically as the characters worst traits are exposed in ugly fashion. A few legitimate scares keeps the tension taut in a swift runtime. Bodies Bodies Bodies contends for the summer’s most fun and absorbing film.

The old pals and two strangers start getting hammered. They decide to play the hurtful party game, Bodies Bodies Bodies. Some initially balk as their last attempt ended with tears and bruised feelings. A curious Bee and Greg are taught the rules. The lights are switched off, everyone scampers, and the game begins in earnest. The first round rubs old wounds as grievances resurface. The second round turns deadly. Shock and horror overtakes the group. They lose power and cell reception as the storm arrives. A killer’s in their midst. Are the newcomers to blame? Or is a murderer masquerading as a dear friend?

Bodies Bodies Bodies deliciously skewers the illusion of civility. Dutch actress and filmmaker, Halina Reijn (Valkyrie, Instinct), nails the descent into blame and backstabbing. The dam that held back the characters’ deep dislike for each other bursts. Trust evaporates as motives are questioned. The interlopers become easy targets. There’s no history with Bee and Greg. They’re unknown commodities in a frantic situation. The film lives up to its title as the second act increases the carnage.

The script by Sarah DeLappe and Kristen Roupenian impresses on multiple fronts. Each character’s awful secrets slither out under duress. We learn their twisted histories of dalliances, addiction, and jealousy. The language hurled in their heated arguments had me rolling. They sling trendy verbiage like nonfat mocha lattes at Starbucks. This is done with a satirical edge that mocks the self-righteous arrogance that pervades modern youth.

Reijn takes another bow for technical direction. I think this will be the most overlooked aspect of the film. Bodies Bodies Bodies takes place in the dark during a storm. The characters utilize cell phone lights to prowl around the house. They also have to deal with fierce winds, rain, and falling debris when outside. Perspectives change constantly. Reijn slickly edits the action to keep the audience guessing while staging a textbook horror setting. Her vision is evident by the complete mastery of the film’s ensemble acting, production design, and post-production elements.

Bodies Bodies Bodies is a thoroughly enjoyable experience. It’s popcorn cinema fun where audiences can laugh and shriek together. Avoid spoilers and let the story grab you. I need to find some non-murdering rich friends with mansions.

Bodies Bodies Bodies is a production of 2AM and A24. It will have a limited theatrical release on August 5th. Followed by national distribution on August 12th from A24.