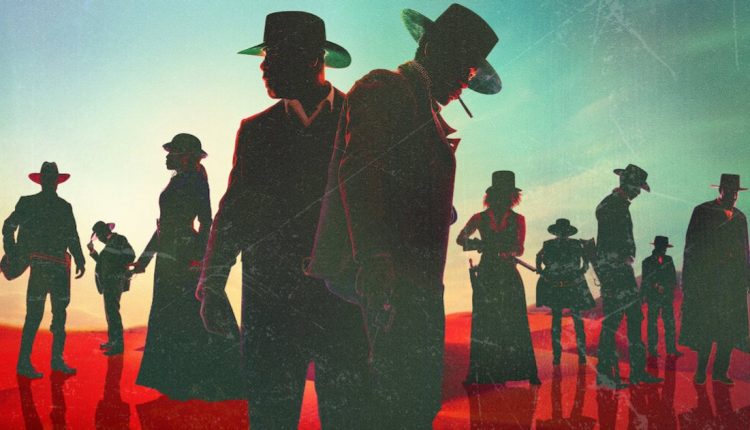 Old West outlaws riddle each other with bullets, beatdowns, and snappy one-liners in a highly stylized Afrocentric actioner. The Harder They Fall is a bloody revenge western with a star-studded cast of Hollywood’s elite black actors. The film gives every character a chance to shine, but comes up short in establishing a substantive narrative. The lack of complexity isn’t a deal killer as most westerns have paper-thin plots at best. The Harder They Fall focuses successfully on a pulp storyline where the talented ensemble and gritty violence keeps your attention rapt.

The Harder They Fall begins with a brutal flashback to a heinous crime. Years later, Nat Love (Jonathan Majors) has established himself as a charismatic criminal who delights in robbing worse baddies. His trusted gang lieutenants, Bill Pickett (Edi Gathegi) and ace gunslinger Jim Beckwourth (RJ Cyler), land a major score by ambushing the Crimson Hood gang. Nat rides into Douglastown to try and win back the heart of his beloved Stagecoach Mary (Zazzie Beetz).

Meanwhile, a train carrying an infamous prisoner is stopped dead in its tracks. The lethal Trudy Smith (Regina King) and eloquent quick-draw shooter Cherokee Bill (Lakeith Stanfield) have freed the most dangerous outlaw of all. Rufus Buck (Idris Elba) has a score to settle in Redwood. Legendary lawman Bass Reeves (Delroy Lindo) visits Stagecoach Mary’s saloon to give Nat Love news of the prison break. Who’s spent nearly his entire life hellbent on a mission of vengeance to kill Rufus Duck. The two gangs collide in a savage conflict that racks up a serious body count on both sides.

Director/co-writer Jeymes Samuel comes out blasting in his debut feature. A card states clearly in the open that this is a fictional story, but “all of these people were real.” Samuel crafts an unapologetically black western using historic cowboys, outlaws, and lawmen. The Harder They Fall represents a fantastical “what if” all-star showdown. Samuel had previously filmed a western short called They Die by Dawn with several of the same characters. He goes bigger, bolder, and brasher here by allowing the cast to revel in their ruthless actions.

Two impressive supporting actors steal the show from the A-list leads. RJ Cyler will have you in stitches as Jim Beckwourth. He provides the film’s comic relief. The best subplot has him chomping at the bit to duel Cherokee Bill. He spends most of his runtime taking trash and spinning his pistols like death frisbees. Danielle Deadwyler kicks a whole lot of ass as Cuffee, Stagecoach Mary’s bodyguard and bouncer. Her character passes as a man, who stirs up hilarious “feelings” in Beckwourth.

The Harder They Fall has a music video element throughout that did not appeal to me. The beats blasting soundtrack isn’t meant for an old school western purist. I’ll readily admit that younger audiences will probably find this aspect appealing and be further drawn into the story. Which never tries to be anything more than the standard revenge theme. The Harder They Fall works due to great casting, characters, and slick action scenes. The Harder They Fall is produced by Overbrook Entertainment and Netflix. It will premiere November 3rd exclusively on Netflix.

BTS gets nominated for Artist of the Year at American Music Awards; ARMY is charged to make them win – view tweets

How the music of Filipino youth continues to rock the regime