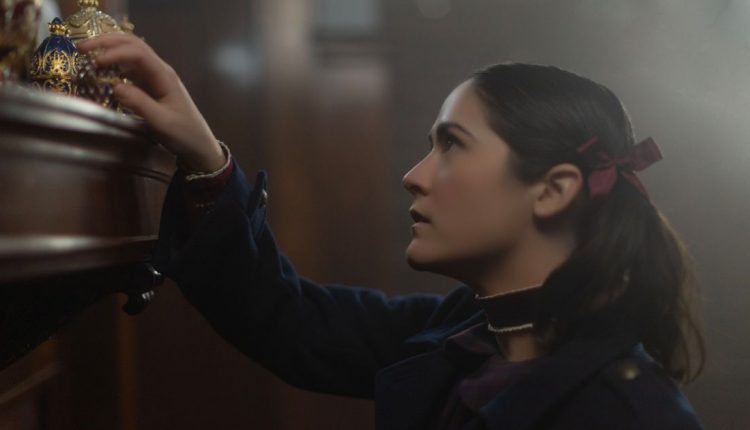 After murderously escaping from an Estonian psychiatric facility, Leena Klammer, who suffers from a hormone disorder that makes her look like a 9-year-old, impersonates Esther, the missing daughter of a wealthy family in America. The family welcomes her back with open arms until an unexpected twist plots her against a mother who is willing to do whatever it takes to protect her family.

“It’s not a choice that she has the lot in life that she does. She has this condition that has forced her to live a kind of life, and people look at her like she’s a child, and I think that’s really made it difficult for her to be happy, and then her devilish way that she deals with her unhappiness. Hollywood has this long tradition of rooting for the villain, and I very much root for Esther,” commented Bell when asked what it is about the sociopathic character that entices audiences.

A Franchise is Three Movies

“I think a franchise is three movies, is how you can tell maybe a full story, and you can always continue after that. But I feel a trilogy can tell a full story… with this story, we get to see a different side to her [Esther], but we still don’t know much about the years before… and so, there’s a lot of story there, to me and everybody. We kind of played around and talked about a lot of ideas as we were making the movie, with Isabelle especially. If we can pull this movie off — and Isabelle is so passionate about the character — it’s like, you can play this character forever if you wanted to, if we can do it in this movie… there’s a lot to that character, and I think in the future stories, she would probably become a bit more cold-hearted again,” said Bell.

Becoming more cold-hearted again, as Bell mentions, refers to how in Orphan: First Kill, Esther has a heightened sense of ability to feel human emotion in comparison to Esther in the 2009 Orphan, and that we see more into how she’s perceived by others, that although does not justify murder, does provide context.

“She just seemed like a bad seed in the first film, and at the end, the twist was interesting that she was an adult, a manipulative evil adult. But now we get to see how some people treat her, and it doesn’t warrant murder on her part, but we certainly see how she has led a hard life because of the way that people look at her,” explained Bell.

Related: Exclusive: Scott Derrickson on Possibility of The Black Phone 2, Says ‘There Could be More’

The Twist in Orphan: First Kill

The twist in Orphan: First Kill works well because it’s an almost impossible one to see coming yet isn’t pulled out of thin air. Bell mentioned that getting this twist right was what the writers needed before they were comfortable moving forward with the story.

“Alex, David Leslie Johnson, and David Coggeshall who created the script, they didn’t want to move forward with another movie until they had a great twist. It took them a long time to kind of have an aha moment where I was like, ‘this could really work.’ From my perspective, when I read the script, I knew there was going to be a twist, and I was very skeptical that I would like it, but I did, even looking for it. We have a first movie that has such an infamous twist, a well-regarded twist that fans love so much, myself included, and it’s a lot to live up to the expectations. So, we just wanted to make sure that it landed, and that it was fun for audiences and satisfying, and lived up to the original as much as we could,” said Bell.

Having an adult actress play a 9-year-old character requires a bit of trickery from a filming perspective. Trickery that Bell compared to the likes of what can be seen in Lord of the Rings.

“We would make sure that the camera was at a slightly down angle for all of her close-ups,” explained Bell, “whereas with the other characters, it wouldn’t be. We would use a different lighting setup for her, to make her looker softer and more pretty. We would use a different lens for her, and of course, then there was the whole aspect of forced perspective. Everybody knows that from Lord of the Rings. Even the most common shot was a magic trick of some sort. She was scaled differently. She was in a different size chair while everybody else was on platforms. There were so many tricks happening in every single shot. We had three body doubles and stunt doubles, and in post-production, we utilized normal cleanup techniques. And instead of trying to make an aging actor look in his 20s [like LOTR], we were making a 20-something actor look like a child. So, it was a lot of the old-school techniques they used before they had digital technology, but we still bleed into digital technology as well. It is just one of the tools.

Paramount Pictures will release Orphan: First Kill in theaters, on demand, and streaming on Paramount+ on August 19, 2022.