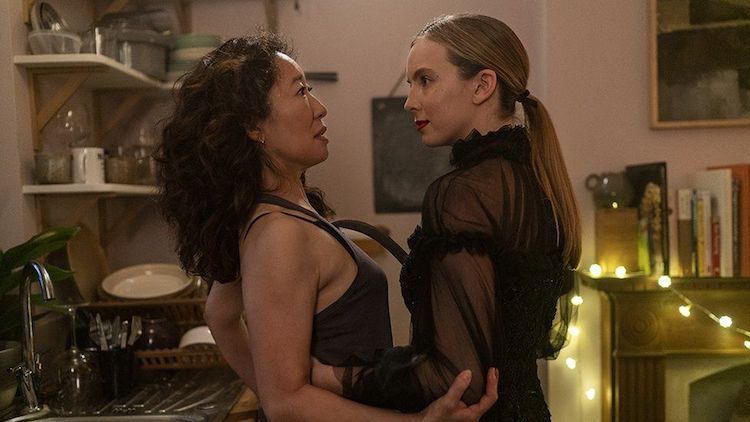 Phoebe Waller-Bridge’s Killing Eve took the television and media world by storm with its exhilarating first season. Created for television, the massive spy series from BBC America is based on the thriller novellas by Luke Jennings. Much like the novels, the record-breaking British-American series follows Eve Polastri (Sandra Oh), a highly-intuitive British Intelligence operative with aspirations for becoming a bigtime spy. After Eve is effectively fired by MI5, she is eventually recruited for a secret MI6 task force, by Carolyn Martens (Fiona Shaw) and tasked with finding a psychopathic female assassin by the name of Villanelle (Jodie Comer).

From the initial jump, fans were completely enthralled by Oh’s Eve Polastri and Comer’s Villanelle. Their twisted cat-and-mouse frenzy sparked a fan-wide recognition of love and allure. Amidst a plethora of heart-stopping scenes, including Villanelle unexpectedly breaking into Eve’s home, Killing Eve fans were immediately hooked to the chaos surrounding Eve and Villanelle’s complex connection. While their thrilling relationship keeps fans on the edge, their dynamic is occasionally disastrous, destructive and in some cases, deadly. Here’s a look into the pair’s extremely dysfunctional history.

In “Don’t I Know You?,” the third episode of the first season, Eve, along with her colleague and best friend, Bill Pargrave, are hot on Villanelle’s trail. While Eve is attending a dinner with Jin Yeong, a significant Chinese official, Bill unexpectedly finds himself in pursuit of Villanelle after crossing paths with her in a Berlin train station. On his own, Bill eventually follows Villanelle to a nightclub, believing that he has her trapped. Unbeknownst to him, Villanelle was aware of his presence the entire time and has used it to her advantage. After flashing a devilish smile in his direction, Villanelle pushes through a crowd of dancers and stabs Bill several times in the chest before he falls to the floor and dies.

Fans were initially shocked by the unexpected death, and continue to mourn Bill seasons later. Many fans began to speculate Villanelle’s reasoning, with Villanelle herself ultimately telling Eve that Bill was “slowing her down.” The death became a turning point in Eve Polastri’s personal and professional life, with Eve telling Elena, another colleague, “I want to kill her.. with my bare hands.” Despite the mutual attraction and obsession between Eve and Villanelle, many fans believe that the former has never forgiven her adversary for the murder of Bill, thus adding an element of toxicity to their relationship.

They Have Both Tried To Kill Each Other

Killing Eve’s action-packed season one finale, “God, I’m Tired,” ended on a shocking cliffhanger. In the finale’s final minutes, Eve surprisingly stabs Villanelle while the pair are lying in bed together. While fans were unapologetically pining for a kiss, they instead received Eve’s attempt at revenge for the murder of Bill. On the other hand, Eve’s chaotic actions immediately meet a sense of remorse as she strenuously looks for a way to stop Villanelle from bleeding out. The messy interaction perfectly conveys the overall message of their complicated, yet unbreakable connection with each other.

Subsequently, Villanelle herself achieves a bout of revenge in the season two finale, “You’re Mine.” As obsessive as an episode title can get, viewers experienced a magnitude of chaotic behavior from both female characters. In the final moments of season two’s finale, with tension building, Villanelle expresses possession of Eve, to which Eve simply shakes her head and denies it. As Eve turns and walks away, an enraged Villanelle shoots her. Thus, the series quickly reminds fans of Villanelle’s psychopathy, and in turn, highlights their abrupt decisions to kill the other. That’s as toxic as it can get.

Their Relationship Is Based On Obsession

Ever since their initial meeting in a hospital bathroom, Eve and Villanelle have undeniably been drawn to one another. Moreover, what starts off as simple attraction transforms into erratic behavior, along with the examining of their true sexualities. Moreover, Eve’s personal life steadily declines as complications arise when her husband, Niko, expresses strong disinterest in Eve tracking down a female assassin (along with his inkling of Eve’s obsession with Villanelle).

With their actual intentions aside, and not entirely known, Eve and Villanelle are undoubtedly driven by their strong desire to wholly understand each other. As a result, Villanelle often teases Eve by leaving miniscule hints at the crime scene of her latest kill. In turn, Eve remains completely enthralled by the idea of Villanelle’s desire and ability to kill, which ultimately causes her to risk her personal and professional life just to spend more time studying (and being near) Villanelle. With that in mind, the complexity of their relationship steers away from a traditional love story, and instead focuses on themes of obsession and lust when it comes to their twisted, yet simply intriguing dynamic.

Betty White’s last word showed how much love she still had for her husband according to Mama’s Family star Vicki Lawrence.

Taylor Mansfield is an evergreen writer for Movieweb. She is a multitalented writer and diverse content creator experienced in researching, writing, and editing varied forms of content. Taylor is able to craft and construct raw, organic pieces of literate work. She is exceptionally knowledgeable in areas of popular media such as movies, tv shows and video games.