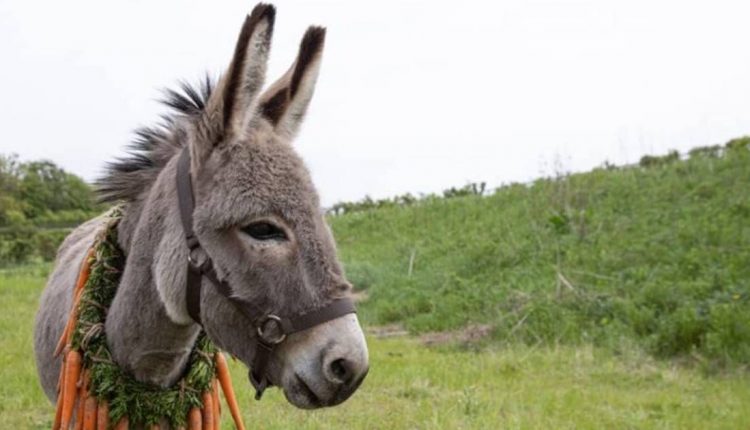 For most of us, our experience seeing donkeys on the big screen probably ends at Winnie the Pooh. When it comes to films about animals in general, many gravitate toward house pets like dogs, and those films are usually animated. But the new film EO is here to break the norm and bring us into a live-action world where we follow the journey of a real-life donkey.

The world is a mysterious place when seen through the eyes of a donkey. EO, with his melancholic eyes, meets good and bad people on his life’s path during the new film from acclaimed filmmakers Jerzy Skolimowski and Ewa Piaskowska. He experiences joy and pain while enduring the wheel of fortune turning his luck into disaster and his despair into unexpected bliss. We recently caught up with director Skolimowski and Piaskowska, his partner and co-writer/producer, to hear more about this very impressive drama that just won Best International film at the New York Film Critics Circle awards.

Story Behind the Unique Concept

MW: How did you come up with the idea behind EO? Was there something that inspired you to tell a story like this?

Jerzy: Well, it’s the No. 4 film in which [I] collaborated with Ewa [Piaskowska], who is my co-writer, co-producer, and she’s also my wife. After making already Four Nights with Anna, Essential Killing, and 11 Minutes, we were thinking, “What should be our next subject?” And we were fighting with two issues. First of all, we found out that we are both bored to death by the formula of the classical narration, the linear narration of telling the story from A to Z, keeping the structure, the classical structure of three acts, and then introducing the characters… And I keep joking that, “In the 19th minute, you have to have a plot point”… For a long time, I kept to those rules, and I didn’t complain then. But I’ve had enough of it, and I want to change the formula, I want to find some new formula, which might be more interesting to the audience. At least, it would be more surprising… They wouldn’t be expecting plot points on the 19th minute. They wouldn’t expect any plot points because of the freedom of the formula I wanted to propose. So that was one thing.

Ewa: And another thing is, we live in a forest.

Jerzy: Yes, for many years now, we’ve lived in a wild forest, far away from people. So when we leave the house to walk our dog — on a leash, of course, because there are plenty of wild animals — we keep meeting those animals. And we keep meeting deer, foxes, and lots of animals, which of course changes the attitudes toward nature, and towards animals. One starts to appreciate it in a much stronger, much more personal way. It almost looked like, this is the idealistic world in which we all should we be living.

Ewa: It’s like, we are the intruders in their world, not the other way around, you know?

Jerzy: And when you are aware of such barbaric extremes of human treatment of the animals, like industrial farming, this is something which I believe is a shame to humanity. And therefore, somehow naturally, we reduce the consumption of meat more and more and more.

Ewa: So that was number two. Number three was as Au Hasard Balthazar.

Jerzy: Au Hasard Balthazar, the only film which made me cry, I do admit it. You know, the filmmaker has a natural, slightly cynical, slightly professional look at the screen while watching somebody else’s film because mostly, you look at how it is done, why the camera is put on such an angle and not the other way, the techniques of filmmaking. While Robert Bressan reduced me to a normal viewer, who purchased the ticket and lets his emotions be attacked by the artists who really completely took over, I forget about looking at where the camera was put and what were the technical aspects of the shots.

Ewa: Yes, these are the elements. And also, when you create a film as we do, which requires so much work from the script, directing, producing… it really takes us up to three, sometimes four years of your life. So if you sort of venture to make something, you really want it to be about something that matters, something that is deeply personal and meaningful.

Jerzy: It’s a need, an eternal need to take a voice. Once, I used the expression, “If I would be a pop singer, I would try to sing a protest song against people who mistreat the animals.” It sounds a little bit pompous, but it’s a good sample of the feeling involved in working on this film. I wanted to protest, I wanted to take a voice on the dramatic subjects.

Ewa: But also suggest more empathy… It’s also a very gentle film and a loving film. It’s also about empathy for animals and an appreciation of nature. It’s not just the negative things. It’s also a positive and uplifting sort of affirmation of nature such as well.

Jerzy: And once we met those donkeys… one cannot help but fall in love. They are sweet, sweet creatures… So as you see, there was a lot of passion in this film.

Ewa: And we hope it translates to the screen because it seems to for some people, at least.

Jerzy: And maybe reducing meat consumption would somehow ring the bell in people’s minds. Many times, I have this reaction from the particular viewer, they say, “You know what I did first after seeing the film? I ran home, and I hugged my pet.” So I hope that the final result of the film, which would be the greatest award this film could get, would be reducing the meat consumption.

MW: I think I read somewhere that at least four different donkeys were used for filming?

Jerzy: Six to be exact. It’s quite complicated because, first of all, they had certain characteristics, unique characteristics… Where we shot the first part of the film, we found Taco, the male, and Ola, his female partner. Taco was the action guy when there was a need to go from point A to point B.

Ewa: But also cross the streams, cross the bridges, walking tunnels, all the action sequences.

Jerzy: Ola had the most beautiful mug of all the donkeys we met.

Ewa: Of all the donkeys in the world. [laughs]

Jerzy: They were all the same breed, which is called Sardinian. And so, they look exactly the same. One cannot take one from the other, although Ola’s mug had something specific. She is really the “Ms. World” of the donkeys. There is some beauty, some gentleness in her mug, which is unique. So she was used mostly for the close shots, or for the most intimate shots. Like when Cassandra’s circus partner was hugging her in the stable — that was the scene when we shot with Ola. When it came for the walk through the forest, the night walk, which was the most difficult scene to shoot, it was of course Taco, the most energetic, the bravest, the strongest… But I have to say, that wasn’t the only criterion for choosing a particular donkey… Also, a very important part [was] the well-being of the animals because what we found out working with them, that the most difficult for them, for the animals, was the transportation, not the work itself… The most difficult was bringing them on the set and taking them from the set on those bumpy roads, where the horse wagon was swinging, and the pull for animals was really feeling very uncomfortable. So, therefore, to avoid those longer trips, where we’re moving from one region to the other region as when making the road movie, to cover the long distance, we were trying to find doubles, which were local donkeys. So those were the two criteria for choosing them.

MW: What do you think was the most challenging scene to shoot?

Jerzy: Definitely the forest one.

Ewa: But also you could say that the most difficult was the one in the fox farm.

Jerzy: But “difficult” in technical aspects, bringing our equipment to that wild forest. And when we arrived there… and I brought my DP with me, he said, “Well, this is really the most beautiful [spot]. But you know, I would have to build… six light towers.” You know, you have to go with the light, over the top of the trees.

Ewa: But from an emotional standpoint, that scene with the foxes was the most gruesome.

Jerzy: Well, this is a different subject. “Psychological difficulty” was really to go to that place where they really kept the foxes, real animals kept there, with the real people who were dealing with them. And I must say that half of the group, including myself, were nearly sick.

Ewa: All of us were depressed.

Jerzy: The faces of those poor animals, you know, being treated this way. We used the softest material we shot, really, because everything else was too brutal. And therefore, I wrapped the scene around with as many light moments as I could… There is humor in this film as well. It’s not only about the cruelty of human beings against animals, but also there are some funny scenes, so people can relax and enjoy being in a cinema.

MW: What was it like working with Isabelle Huppert?

Jerzy: Well first of all, it was a professional pleasure [working] with somebody who knows everything about filmmaking. And she didn’t hide the fact that she knows everything. She told me, “For me, when I come on the set and I see where the director puts the camera, it tells me everything.” [laughs] So I was very careful where to put my camera, [trying] to use all my knowledge plus some instinct, of course, knowing what I want to get out of the scene. But she asked me several questions, which I had to answer intelligently enough to persuade her to follow my wishes.

Ewa: Don’t forget that [it] was about animals for her as well.

Jerzy: Yes. And the fact that she was voicing her love for animals and for nature. That was something that we had in common, which was strong enough to make us work very hard.

EO comes to us from Skopia Films.

These are the 101 best restaurants in Los Angeles