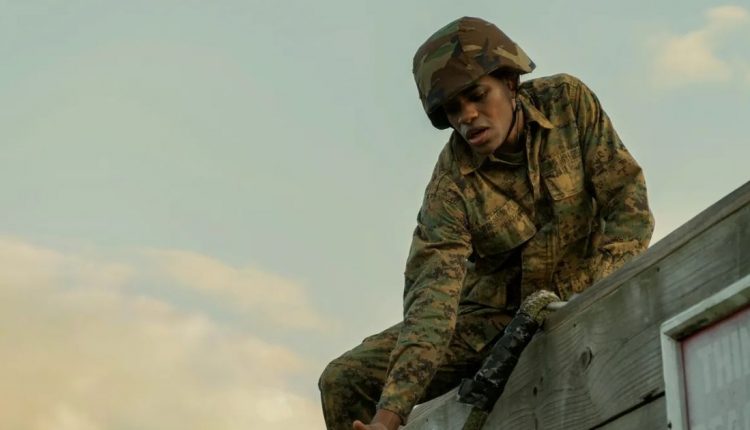 It’s easy to see why The Inspection has been wowing audiences, first when it made its world premiere at TIFF last September, and then, more recently, upon its limited release last month in the U.S. ahead of Thanksgiving. With razor precision and utmost care, director Elegance Bratton has woven a narrative tapestry that explores our innate need for love and acceptance, the lengths to which we’ll sometimes go in order to achieve it, and, more importantly, the sacrifices we make along the way.

Pulling from Bratton’s own military experience, The Inspection follows Ellis French (Jeremy Pope), a young, gay, Black man, who joins the Marine Corps in a last-ditch effort to, on the one hand, save himself from his unhoused situation and, on the other, to finally win the elusive love and approval of his mother, Inez (Gabrielle Union). The film is set in the later years of America’s Don’t Ask, Don’t Tell policy; as a result, not only does Ellis have to hide his sexuality from his unforgiving unit commander Leland Laws (Bokeem Woodbine) and his fellow recruits, he inadvertently has to keep at bay his unexpected attraction to one of the camp’s trainers, Rosales (Raúl Castillo). Throughout boot camp, Ellis undergoes a physical and emotional transformation as he comes into his own, both as a man and a Marine.

There have been many great military movies across cinema history, but The Inspection is undoubtedly singular. More than just the Black and queer representation — a refreshing perspective, of course, in a genre that has historically been predominantly straight and white — Bratton’s film makes the argument that, amidst the brutality of war (and in training for it), strength can also be found in and built upon vulnerability and empathy. It’s significant that The Inspection takes place solely at the boot camp, eschewing any pro- or anti-military sentiments and offering, instead, a close-up examination of the bonds between troops.

An Actors Showcase (Especially for Pope and Union)

In this regard, The Inspection is effectively an actors’ showcase; everyone in the entire cast is given a moment to shine. Even more remarkably, every character by the end of the film walks away either changed or, at the very least, seen differently (whether by other characters or by the audience). Leland, for example, could have easily been your typical aggressive, homophobic commander — which he is at times — but Woodbine imbues him with hard-earned strength and gravitas that makes you curious about his backstory. As Rosales, Castillo is magnetic, a comforting presence whenever he’s on-screen. Additionally, the dynamic between the recruits — played by McCaul Lombardi, Aaron Dominguez, Nicholas Logan, Eman Esfrandi, Andrew Kai, and Aubrey Joseph — is electric.

It’s Pope and Union, however, who shine the brightest. The two were recently nominated for Independent Spirit Awards for Best Lead and Best Supporting performances, respectively (via Variety), and it’s very much deserved. Pope’s performance is, at once, still and vibrating with feeling. He deftly navigates Ellis’ conflicting need for discretion and desire for connection. Pope’s on-screen career may have only started a few years ago (in 2018’s The Ranger), but he proves that he’s already a force to be reckoned with. Likewise, Union has never been better. A career-best performance, she transcends the minimal screen time she’s given and gives Inez a depth that rejects judgment and invites understanding. The scenes between Ellis and his mother are arguably more painful than the drills and assaults he goes through during training, and it’s certainly because of the chemistry between the two actors.

In addition to the actors’ riveting performances, part of what makes The Inspection a formidable directorial debut from Elegance Bratton is Lachlan Milne’s dynamic cinematography and Animal Collective’s score. Almost documentarian, Milne’s camera flits between Ellis’ perspective and that of a third party, providing an in-depth look at both the soldier and the larger system he operates in. This is crucial in understanding that Ellis’ experience as a gay soldier during one of the most misguided moments in modern American military history is far from individual. Animal Collective’s score only adds to the intimacy of The Inspection. With experimental pop and electronic influences, the music ebbs and flows as Ellis is tugged back and forth between his conflicting emotions.

Related: A Wounded Fawn Review: A Psychological Horror That Takes its Viewers For a Wild Ride

By the end, where Bratton succeeds the most with The Inspection is in its assertion to look past what we initially see in others. In the same way that Ellis’ fellow troops learn to see him as a brother-in-arms and not just a gay man, so too must we see the similarities we share beyond the differences that separate us in order to survive. It’s ultimately how Ellis — and, by extension, Bratton himself — survives. It would be easy to write off Leland or Inez as homophobic and ignorant or, in the latter’s case, “a bad mother,” but that’s too elementary. Complacency, of course, in the face of hatred and bigotry is also not the message. No, it’s about the pursuit of love or, at the very least, understanding. In our increasingly divisive time, what will save us, as The Inspection proves, is a commitment to connection.

The Inspection is now playing in theaters.