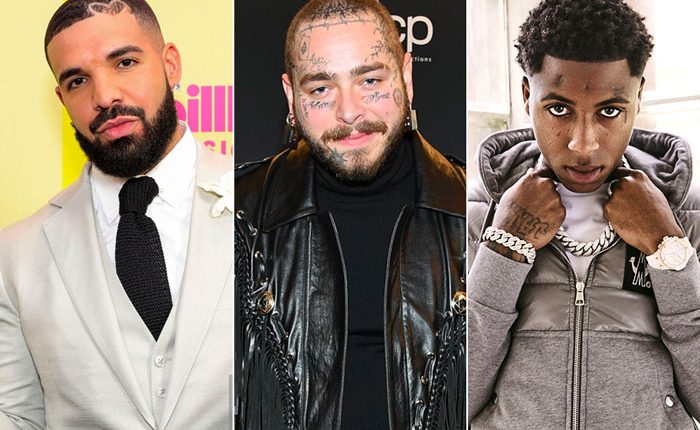 Billboard has released its highest-paid musicians of 2020. In a year with little touring, hip-hop/R&B acts dominated streaming sales and accounted for nearly a third of the 40 artists on the list, including four in the top 10—Drake, Post Malone, YoungBoy Never Broke Again, and Lil Baby.

Following Taylor Swift, who ranks No. 1 with $23.8 million, Post Malone moves up to No. 2 after placing No. 6 on last year’s list. He earned $23.2 million, of which $12.4 million is from touring prior to the pandemic shutdown. He also remains a streaming giant with $8.1 million in overall royalties, plus an additional $2 million from publishing.

Although he has yet to release his long-awaited album Certified Lover Boy, Drake continues to put up big numbers, landing at No. 6 with $14.2 million. He remains the overall most-streamed act with almost 8 billion streams, accounting for $11.7 million, only second to Taylor Swift in streaming royalties.

For the first time, YoungBoy Never Broke Again scores a spot on the top Money Makers at No. 9 with $11.9 million. He earned $10 million in combined streaming royalties including over 1.4 billion in video streams, 6.2 billion in audio streams, and almost 7 billion in overall combined streams.

Lil Baby rounds out the top 10 with $11.7 million. His streaming figures accounted for $9.1 million, thanks to his chart-topping album My Turn, for which 12 songs simultaneously charted on the Billboard Hot 100. He earned an additional $2.2 million from publishing and $253,000 from two concerts.