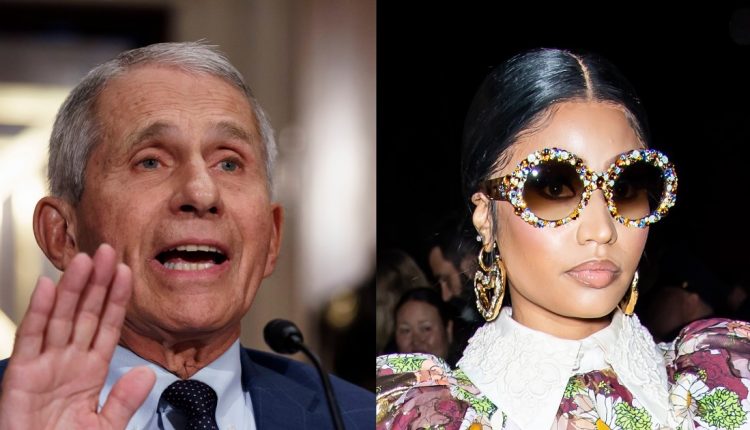 Say what you will about Nicki Minaj, the rapper knows how to carry a conversation.

Just call her Miss Information Barbie when it comes to COVID-19 vaccines.

Minaj’s viral vaccine-hesitancy tweets this week — mainly her cringe-worthy citation of an anecdotal, friend-of-a-friend experience with swollen testicles — made her the topic of cable news shows and Twitter memes and the punch line for plenty of late-night jokes.

Even Trinidadian TV covered it, with one news anchor ridiculing the story about her cousin’s friend’s “flat tire.”

The tweets also earned her a lot of critics, getting the attention of British Prime Minister Boris Johnson as well as leading U.S. coronavirus expert Dr. Anthony Fauci. Dr. Fauci swiftly debunked the notion that the vaccine affects the reproductive system.

It should be noted that Minaj said she would likely get vaccinated to go on tour and recommended the shots to anyone who needed a jab to keep their job.

In fact, her hesitancy apparently had little to do with her Trinidadian cousin’s friend’s purported side effects but rather with her own COVID-19 experience. She apparently contracted the disease, which forced her to stay away from her young son, and doesn’t want to repeat that brutal experience.

Despite her presumptive natural immunity, she said she wanted to do her research before getting inoculated.

Unfortunately, that hasn’t been the takeaway from her viral Twitter thread; instead it was her citizen-researcher stance and her bizarre friend-of-a-friend anecdote. Monday’s tweet to her more than 22 million followers has prompted medical experts to weigh in on the vaccine conspiracy theory in an effort to debunk disinformation by people with huge social media followings.

A rep for Minaj did not immediately respond to The Times’ request for comment.

Responding Tuesday to a question from CNN’s Jake Tapper about whether there was a link between the three vaccines approved in the U.S. — Moderna, Pfizer and Johnson & Johnson — and reproductive issues in men or women, Fauci said, “The answer to that, Jake, is a resounding no.

“There’s no evidence that it happens, nor is there any mechanistic reason to imagine that it would happen,” the director of the National Institute of Allergy and Infectious Diseases continued.

“I’m not blaming her for anything,” Fauci added after bemoaning COVID-19 misinformation on social media, “but she should be thinking twice about propagating information that really has no basis.”

CNN’s Dr. Sanjay Gupta explained that a lot of people have “concomitant issues” — health concerns that might pop up around the same time as a vaccination but have nothing to do with the shots. “Vaccines causing swollen testicles, that’s not a thing,” he said.

“Nicki Minaj says she wants to do her research — there’s plenty of research out there. The journal of the American Medical Assn. looked specifically at fertility issues and didn’t find fertility issues,” said Gupta, who noted that impotence and infertility have been unfounded fears since the vaccines were rolled out. “I appreciate her wanting to do the research. It’s out there. I wish her cousin’s friend well, but that’s not related to the [COVID-19] vaccine.”

Back on Twitter, Minaj kept firing away. She provided a tongue-in-cheek update Tuesday about the cousin who unexpectedly found himself in the spotlight.

“My #cousin who has #TheFriend just texted me telling me to call him. *Bites Nails*,” she wrote. “Ugh! You idiots!!! If he saw this on the news it’s all your fault!!! It was supposed to be a secret …. If either of them ask, u ain’t heard it from me. Okay? *stares @ text.”

The Grammy-nominated rapper also attacked MSNBC’s Joy Reid with a racist slur for scolding her about her vaccine skepticism. Reid was disappointed that Minaj was using her hefty platform “to encourage our community to not protect themselves and save their lives.

The pop star responded with the slur and called Reid a homophobic liar, pulling up receipts of Reid’s 2018 blogging scandal: “I guess I can join in the reindeer games too right? Ppl can go on tv & lie on me, I can report on them, too right?” Minaj tweeted. “Doesn’t have to be truths. It can be half truths.”

Then the hosts of the influential morning radio show “The Breakfast Club” called out Reid and reminded her that Minaj did eventually say she would get vaccinated. (But remember, that hasn’t been the takeaway in all of this.)

“Professor Whitty beefing with the ghastly @NICKIMINAJ (one of the rudest little madams I’ve ever met) is not the breaking news that I expected today – but it’s most welcome. She’s peddling lies that will cost lives,” Morgan tweeted.

“Sir I’ve never met you. I know… we all look alike,” Minaj tweeted in response. “‘Rudest little madam’. I like it. Has a special ring to it. Thanks Pierce. Love the accent. I’d love to come chat. Scones. Tea. Clown nose & big red shoes for you. Lmk babe,” she wrote. She then called him out too and corrected his own misinformation about their history with a choice, expletive-laden tweet.

But Morgan parried, tweeting that they had indeed met, on “America’s Got Talent,” and that all British names must sound alike because she got his wrong.

Not surprisingly, Minaj’s declarations were sensational fodder for the late-night circuit. Stephen Colbert spoofed her hit “Super Bass” with “The Late Show’s” own “Super Balls,” and Jimmy Kimmel said he wanted to interview her cousin on “Jimmy Kimmel Live.”

The rapper retweeted the late-show bits and said she loves Colbert, but said she “never cited” the swollen-testicles anecdote as a reason that she didn’t get vaccinated.

“The lie is so funny/entertaining tho. I’d say smthng mean to this lady but I rlly like Stephen Colbert,” she said of the parody, which opened with CNN’s Brianna Keilar asking Gupta about the controversy.

As for Kimmel’s interview request, she tweeted that her cousin was “willing to talk for the right price.”