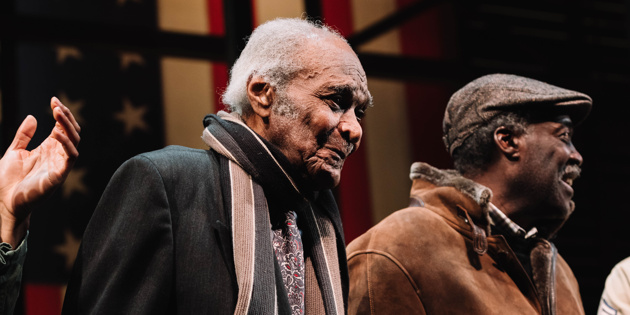 Douglas Turner Ward and Charles Fuller at the opening night of A Soldier’s Play on Broadway
(Photo by Emilio Madrid for Broadway.com)

Douglas Turner Ward, an acclaimed leader in Black theater and co-founder of the Negro Ensemble Company, died on February 20 in his Manhattan home, according toThe New York Times. He was 90.

Born on May 5, 1930 in Burnside, Louisiana, with the given name Roosevelt Ward Jr., Ward was raised in New Orleans. He went on to attend the University of Michigan, where he majored in politics and theater before dropping out and moving to New York City at the age of 19. Ward adopted the stage name Douglas Turner Ward as a tribute to his two role models: abolitionist Frederick Douglass and slave rebellion leader Nat Turner.

In 1956, Ward appeared in Circle in the Square Theatre production of Eugene O’Neill’s The Iceman Cometh, marking one if his first acting performances. He made his Broadway debut in 1959’s A Raisin in the Sun. Ward found success with his writing in 1965, when he premiered two one-act plays Happy Ending/Day of Absence at St. Mark’s Playhouse, which earned him his first Drama Desk Award.

Ward penned an opinion piece for The New York Times headlined “American Theater: For Whites Only?” in 1966, calling for “the development of a permanent Negro repertory company.” The article was seen by the Ford Foundation, which provided a grant of more than $400,000 for the creation of the Negro Ensemble Company. Founded by Ward, Robert Hooks and theater manager Gerald Krone in 1967, the Tony-winning Negro Ensemble Company is still running today as foundation for Black theatermakers.

The Negro Ensemble Company produced several Broadway and off-Broadway productions, including the Ward-directed The River Niger (1973), The First Breeze of Summer (1975) and Home (1980). The River Niger won the Tony Award for Best Play and earned Ward an acting nomination for his featured role. The First Breeze of Summer also garnered a Tony nomination. In 1969, the Negro Ensemble Company received a Special Tony Award.

Off-Broadway, Ward directed the Pulitzer Prize-winning A Soldier’s Play as well as Wee and Zooman and the Sign, all of which were written by Charles Fuller. In 2020, A Soldier’s Play made its long-awaited Broadway debut, and both Ward and Fuller were brought on the stage for the opening night curtain call.

Ward was inducted into the Theater Hall of Fame in 1996.

He is survived by his wife, Diana Ward, whom he married in 1966, and their children, Elizabeth and Douglas.