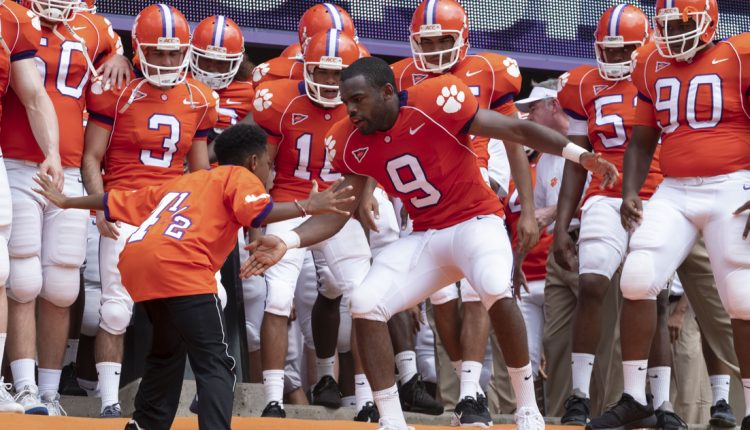 Safety is the inspirational and life-affirming true story of former Clemson football player, Ray McElrathbey. He defied all odds by becoming the legal guardian of his younger brother, Fahmarr, when their mother was institutionalized for drug addiction. It is a poignant tale of family bonds, and how the team rallied to support them. Safety reminds us of a community’s ability to affect positive change on the lives of people in need.

Safety is set in 2006 at Clemson University, South Carolina. Freshman Ray McElrathbey (Jay Reeves) moves into the players dorm and prepares for the grueling season to come. Born in a poverty-stricken Atlanta housing project, Ray earned a full scholarship to play safety at Clemson’s premiere football program. He takes eighteen credits while trying to start for the team. Ray recognizes his opportunity and works tirelessly to make the most of it.

Ray ignores calls from his eleven-year-old brother, Fahmarr (Thaddeus J. Mixson). When he finally answers, he learns their mother, Tonya (Amanda Warren), has been arrested again for drug use. Ray immediately returns home to find Fahmarr staying with a nearby drug dealer. Their apartment was a filthy mess with no food in the refrigerator. Ray refuses to let his brother go to a foster home. He agrees to care for him while their mother enters a thirty-day rehab program.

Ray sneaks Fahmarr into his dorm room. He and his roommate, Daniel (Hunter Sansone), go to extraordinary lengths to hide the boy. Roy struggles with taking Fahrmarr to a local elementary school, practicing with the team, and his hefty coursework. Other members of the team figure out what’s happening and jump in to help the brothers. The coaching staff, Head Coach Bobby Bowden (Matthew Glave) and Assistant Coach Sullivan (James Badge Dale), get wind of Ray’s problems. They also try to help, but are alerted the team is breaking NCAA rules. Violations could lead to crushing sanctions for the football program. As Ray faces the loss of his scholarship, he gets more daunting news. His mother will not be released, leaving Fahmarr’s future in jeopardy.

Safety hits like an emotional freight train. Ray is the embodiment of courage and resilience. At first he stalwartly refuses help, he and his brother will not be “charity cases.” It takes the friendship of his roommate, and romantic interest (Corinne Foxx), to make him realize that assistance is not a bad thing. He and Fahmarr will not be abandoned. Their lives are more important than NCAA football sanctions. Audiences will swing from tears to exuberance as Ray and Fahmarr unite Clemson, the town and school, behind them.

Director Reginald Hudlin (House Party, Marshall) makes the film impactful without resorting to melodrama. Safety does not play out like a preachy after school special. There was never a choice for Ray McElrathbey. His brother’s well-being was paramount. Hudlin delivers that message firmly, but also shows the good intentions and resolve of the people surrounding the McElrathbey family. “It takes a village” is an age-old proverb that has never lost its meaning. Safety is a shining example of how much a village can do. Safety is a production of Select Films and Walt Disney Pictures. It will be available to stream December 11th exclusively on Disney+.