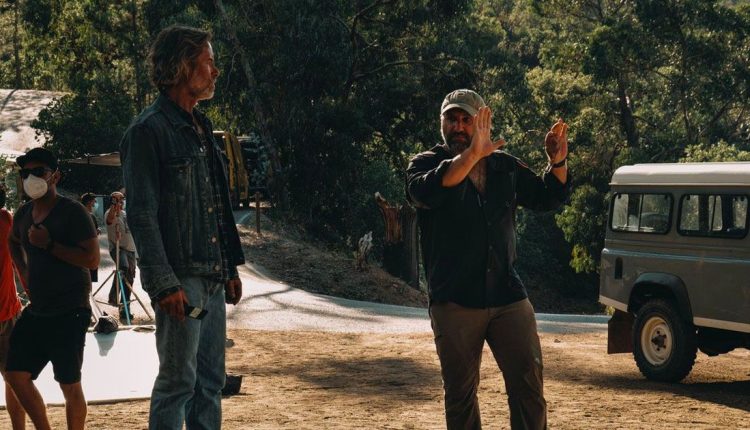 Bruce Cogburn (Guy Pearce) is the author of the famed book “The Infernal Machine.” He’s a controversial man who lives a reclusive life. As he begins to receive letters from an obsessive fan, he embarks on a dangerous search for the person behind them, forcing him to face his past and the truth behind his writings.

Starring alongside Pearce in The Infernal Machine are Alice Eve, Alex Pettyfer, Jeremy Davies, and more. It’s written and directed by Andrew Hunt, and is in select theaters and on digital as of September 23, 2022.

“I think the biggest thing is for them [the audience] to kind of just be on an emotional roller coaster ride,” commented Hunt.

Character Study of The Infernal Machine

“My feeling is that I’m one of those audience members,” shared Hunt, “and that I want to go down a really interesting rabbit hole, a real crazy emotional roller coaster where the audience might be predicting what they think is going to happen, and then completely pull the rug out from underneath them and realize that yes, this film is a psychological thriller, but it’s also a character study.”

Hunt continued, explaining how the character study can relate to audiences on a more personal level. “It’s of a character who’s just trying to find his own inner truth, and trying to find the courage to kind of face that truth. And so, I think it’s like a mixture of you walk out, and you’re like, ‘Okay, that was a great ride,’ and at the same time, it’s commenting on how we are, as all of us have a very interesting story of who we are right now. And a lot of the ways that we live our lives now are based on decisions we made in the past, and sometimes those decisions are haunting our present. The idea of being able to know that you can change that present, you can make different decisions, and you can create a whole new future for yourself is something that I’d love for the audience to walk away with.”

When I was 10 years old, I had a shoebox full of action figures and if it was a rainy day, and I knew that none of my friends were coming over and I was going into my room with this box of action figures, I had no idea what I was going to do, but I was so excited with the potential of what I could do. And I feel that same feeling I had when I was 10 years old now at 47 when I’m walking down an entire row of film trucks getting ready to walk on set, and I get to play for a day.

As for the characters in The Infernal Machine, Hunt shared that he drew inspiration for Bruce Cogburn from people throughout history who have experienced similar dynamics including J.D. Salinger and The Beatles.

“There’s a couple of different references, where whether it’s J.D. Salinger and “Catcher in the Rye,” or Charles Manson and The Beatles’ “Helter Skelter,” it’s one of those things where there’s the theme of creator versus creation. You create this thing that you’re now unleashing into the world, and your intentions, you may have the best intentions… if it comes out and somebody misinterprets the message… the real question to ask is how does the creator now feel, that what they have made has created this negative kind of response to maybe not just a group of people, but to an individual who now has lost a loved one because of a writer or musician sitting there writings a song or writing a book. I felt that was something that was really interesting to discover, that guilt of what an artist kind of carries when their work has been misinterpreted.”

Related: Exclusive: Sara Mitich on her Sci-Fi Mystery Control, Loves the ‘Gritty, the Dark, and the Human’

Guy Pearce and Alex Pettyfer in The Infernal Machine

“Working with Guy is like an honor above honors,” commented Hunt. “I’ve grown up watching his films. He’s an amazing actor, and to take something that I had written on the page, and now Guy is embodying that character, and creating so many more layers and levels, and you’re seeing his three-dimensional tortured soul in front of the camera… I had the front-row seat to watch an awesome performance. But the great thing about working with Guy is a real collaboration that, it’s the first time I’ve really had that in film directing, where I never looked at Guy as an actor, more so he’s a partner. Every day we would come in with different ideas and different thoughts on changing and tweaking scenes, and it always being about finding the truth in every scene and what feels honest. And that was something that I was always enthralled by watching Guy work.”

“Alex Pettyfer… him taking this character that initially on the page — I think he was a little two-dimensional — and what Alex was able to do was kind of flush out, and to really make this tougher character absolutely terrifying. I think the reason that he is so terrifying in the film is that he’s everybody. He’s the kid that lives down the street, two blocks down the street from you. There’s something a hell of a lot more terrifying when it’s somebody that you can actually recognize, where it’s not this twirling mustache kind of villain, it’s someone that you might encounter… Alex’s decision to go in that direction and when he presented it to me, I thought, ‘Wow, what a great approach to that character,’ because I hadn’t seen a character like that,” he added.

The Infernal Machine comes to us from Paramount Pictures.

Riverdale star Ryan Grantham gets a lifer for murdering his mother; here’s what the actor said on the final day of hearing