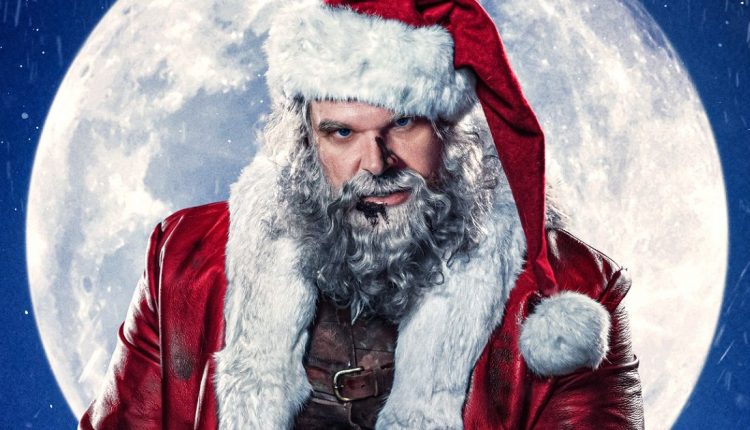 There’s no denying that the idea behind Universal’s Violent Night is clever. Led by a talented cast including Stranger Things star David Harbour as Santa Claus, Beverly D’Angelo (returning to the holiday genre following National Lampoon’s Christmas Vacation), and John Leguizamo (the voice of Encanto‘s Bruno), the major studio’s new holiday-themed action-comedy is certainly worth seeing in theaters — versus at home on your laptop.

It was entertaining enough just hearing the audience react to adult-only moments like the film’s R-rated version of a Home Alone booby-trap sequence, and you can always rely on D’Angelo for zingers — her foul-mouthed matriarchal character echoes her Babs persona from HBO’s Entourage. Leguizamo’s character delivers his own one-liners as the villain, but they feel a bit forced.

Despite some clunky dialogue and familiar tropes that the otherwise unique film falls into, it’s fun seeing household names in a Christmas story.

Violent Night is a Clever Spin on the Holiday Genre

“I love the Home Alones, but I also love Bad Santa. As long as you have a big beating heart, I think you can get away with anything, and you can make a Christmas movie in any genre — as long as you kind of walk out of the theater feeling filled with Christmas spirit,” director Wirkola recently told MovieWeb. “So that was the appeal to me, like, ‘OK, I know I can do an action film, and I can know I can do the extreme humor and all that stuff. But how would it be to combine that with a Christmas movie?’ And that was really appealing to me.”

The premise is pretty simple. After seeing a sloshed Kris Kringle (Harbour eating up the material here) at an English pub, the main storyline kicks in once we meet an estranged couple (Alex Hassell and Alexis Louder) struggling to connect with their energetic young daughter (a standout Leah Brady). They return to the husband’s family home for the holidays, which is owned and locked down by an intimidating power mom/grandma named Gertrude Lightstone. Speaking of lockdown, to cap off the expositional first act, a team of elite mercenaries then descends on the family compound, on Christmas Eve, of all days, taking everyone inside hostage.

D’Angelo sinks her teeth into the fiesty role, and director Wirkola even revealed that some of her R-rated insults were improvised. “[Tommy is] a master at genre-shifting,” she recently told MovieWeb. “He has a master’s ability to create moments, so clearly, of comedy, action, drama, horror, and guide you through that in a way that you don’t lose anything. He can create a heartfelt moment and then, five minutes later, you’re laughing at somebody getting his head cut off. So I really wanted to work with him. But I saw in that role an opportunity to be an empowered [expletive]. And in the context, I thought, ‘How wonderful to be able to explore Christmas through that lens?'”

But back to the storyline. The somewhat clueless team, led by a fiery Leguizamo, isn’t prepared for a surprise combatant: Santa Claus happens to be on the grounds, and he’s about to show why this Nick is no saint. And this is where the film succeeds, particularly in setting up a franchise: Wirkola occasionally cuts the film away to medieval times, when Harbour’s Santa character was once a warrior before he turned into the epic Xmas gift-giver. But Wirkola doesn’t milk it, and we only get glimpses of Claus’ past. Perhaps more will come in a sequel or spin-off, depending on how the film performs at the box office.

So yes, thanks to convenient timing and an even more convenient backstory, Santa Claus must step in to save the day — and Christmas, for that matter. The finished product here got plenty of “violent” help from the producers of Nobody, John Wick, Atomic Blonde, Deadpool 2, Bullet Train and Fast & Furious Presents: Hobbs & Shaw. Let’s not forget the aforementioned booby trap that Gertrude’s granddaughter rigs to quell the inept bad guys following the character’s recent viewing of Macaulay Culkin’s Home Alone. Once the intruders are on-site, and Santa comes to his senses that he shouldn’t give up on the human race, after all, that’s when blood is shed, and it’s a hoot to watch.

Wirkola also helmed the knowingly farfetched Hansel & Gretel: Witch Hunters, after all. Plus, Pat Casey and Josh Miller, the writers of Sonic the Hedgehog, penned the script, which is perhaps why the film doesn’t really hit any lulls.

But why did we really show up? Well, for most of us, all it took was the pilot episode of Netflix’s Stranger Things to become Harbour fanatics. Harbour has been in the game for years. It’s no surprise, then, that he takes command of Universal’s latest holiday offering and delivers a unique blend of action and comedy that Wirkola has been known for. Harbour looks the part right down to the twinkle in his eye.

Violent Night comes to us from Universal Pictures and is available as of December 2.