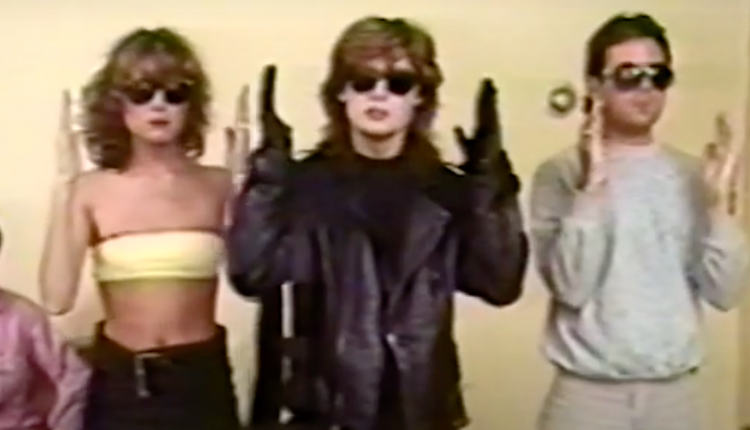 He has teased us! He’s dropped cryptic hints that begged the question, what is Corey Feldman up to with his top secret component for his Love Left 2.1 box set? He finally revealed all yesterday, and it’s even better than we thought!

In case you missed it, Corey Feldman elevated the art form and threw down the gauntlet for media makers around the world with his truly innovative wizardry, utilizing new technology to create a Hologram Corey (Or Feldmanogram, as I like to call it.). With the help of your smart phone camera, Hologram Corey pops up from the Love Left 2.1 box set of his discography to welcome you with what I’m sure are some dynamite dance moves! You thought Star Trek was space age?! Eat your heart out, Wil Wheaton, The Felddog has gone warp speed into the future! I’ll let the innovator explain it himself.

“All U Gotta Do Is Use The Exclusive Qr Code That Comes Inside Each Box Of #LOVE Point Your Smart Phone Camera @ It & Magically #HOLOGRAMCOREY Will Pop Up Atop The Box 2 Welcome U N2 My World As #LOVERETURNS W #LOVELEFT #REMIXED #REMASTERED #REIMAGINED & Of Course The Debut Of #LOVELEFT2 #ARMMEWITHLOVE & A Brand New Documentary, & Lots Of Fun Goodies, Like A Pair Of Black Wayfarer Glasses Just Like The 1’S I Wear On The Cover (& Almost Every Film I Shot From 86-95) Emblazoned W My Name & The Album Title N Sweet Gold Lettering! What A Package!! What A Gift!! Get Your Copy B4 They R Gone! Only 500 Being Created! Buy It Monday, Only @ coreyfeldman.Net.”

Today, Corey shared where it all began, with his very first music video he made, during his time shooting The Lost Boys, for the 1986 track, ‘Runaway.’ The music video is included in Corey Feldman’s Love Left 2.1 box set, and it has a history of its own.

“HERE IT IS, IN ALL ITS HUMILITY, MY VERY 1ST ATTEMPT @ A SONG, & A MUSIC VIDEO! FROM THE UPCOMING LOVE LEFT 2.1 BOX SET I GIVE U…#RUNAWAY BUY THE BOX SET ONLY @http://COREYFELDMAN.NET.”

The video is described by CiFi Records, saying, “Corey Feldman Official Music Video of Runaway from Love Left 2.1 Box Set: This Amazing Time Capsule has been completely restored from the Original 1986 VHS tape it was found on. ‘Runaway’ was the very first song Corey ever wrote, produced & recorded.”

Filmed at his father’s tiny 1 bedroom Hollywood apartment in 1986 while Corey was shooting The Lost Boys. The cast is made up of a group of Corey’s closest friends at the time. 2 boys his own age, featuring his cousin Michael, and close friend Jason, who was also a child actor, a female actress/dancer, a magician introduced to him by Michael Jackson named Majestik, (not an abuser) and 2 men who would later become Corey’s sexual abusers a few short weeks after this video was shot. Corey Feldman says this in the press release.

“I felt this was a pivotal piece to include for my most dedicated fans, as it is my very first attempt at a music video and the first song I ever wrote and recorded. Sadly, it also features two men who would soon become my abusers. I’m not thrilled about promoting them as a trickledown effect of releasing this, but I feel it’s as poignant as it is unsettling, upon the realization that this was an obvious cry for help from my 15-year-old self that sadly fell on deaf ears. Two months later I would fall victim to their agenda, and as a result fled my home and began the journey towards healing, albeit with several expected bumps along the road of salvation.”

The video was directed and choreographed by a young Feldman. Impressive work for a 15 year old. Shockingly, the couch in the video was Corey’s bed during this time. Breaking the preconceived notion that Corey was a “spoiled Rich Kid with a silver spoon in his mouth.” The shocking reality is much more upsetting. Corey wrote this song as a “Cry for Help.” The song and video, which originally had a 10-minute scripted build up to the musical part of the short film, was about an abused kid, who ran away and ended up on the streets where he would be discovered by Majestik’s character (Black Jack) the town Pimp, in an alley, who convinces Corey to come upstairs to this warm safe apartment for a hot meal and some clean clothes.”

The YouTube video’s description continues the tale of the video and Feldman’s life story. It’s clear he took every step to chronicle his life with bleak realities, humility, joy and triumph. Kudos, Mr. Feldman! Can’t wait to see what’s waiting for us in the Love Left 2.1 box set! Here are the deatils in full from the press release.

The all-new box set Love Left 2.1 is a celebration of the early years of his music career (1986-1994) and can be pre-ordered now ahead of its December 11 release date. Love Left 2.1 will only be available in physical formats and not be released digitally. To pre-order, please visit www.coreyfeldman.net.

Showcased throughout four CDs, two DVDs, and more, the stunning box set includes unreleased music, a remixed and remastered version of his debut album Love Left, and Love Left 2: Arm Me with Love, a sequel to his debut album and his first full length studio album of all new music in six years.

The Love Left 2.1 Box Set features an original design heart shaped box illustrated by Howard Teman (who did the original Love Left album art) and graphic designed by GRAMMY-nominated artist Mark London. In addition, it has brand new, state-of-the-art hologram introduction by Corey that magically appears on top of each box (viewable by a QR-code accessed by your cell phone). In addition to over 60 songs, the box set includes a brand-new documentary, hours of unseen video footage, a 50-page magazine, a double-sided poster, a pair of “Classic Corey Style” wayfarer sunglasses, and more.

According to the co-writer behind The Matrix Resurrections, the sequel is weird, beautiful, and connects to the franchise in ingenious ways.