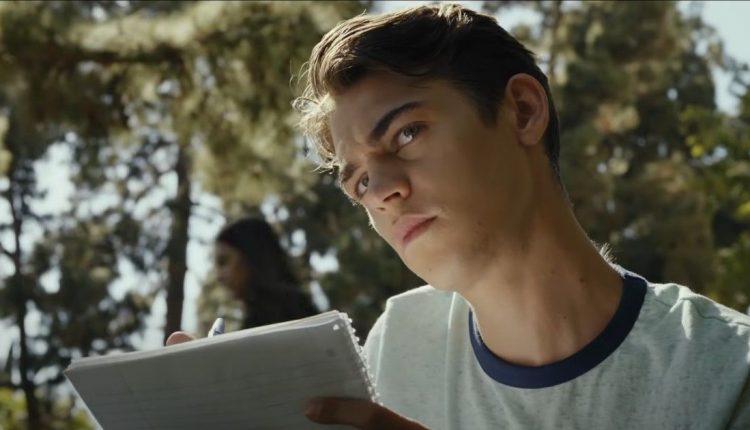 First Love, the newest film starring Hero Fiennes Tiffin, hits theaters on June 17, 2022. Fiennes Tiffin stars as Jim, a high school senior falling in love with Ann (Sydney Park). With their time in high school coming to an end, the two are conflicted over where they want their relationship to go, with their parents giving them drastically different advice. In addition to the difficulties of first love, Jim’s parents (Diane Kruger and Jeffrey Donovan) are struggling with a financial crisis that may impact their family in a significant way.

We had a chance to hear from the film’s composer George Kallis on the concept behind the score and preview the soundtrack before the film’s release. This isn’t the first Fiennes Tiffin film Kallis has worked on. He served as the composer for After We Fell and After Ever Happy, the third and upcoming fourth films in the After franchise, respectively. The actor plays the lead role of Hardin Scott in the saga.

Kallis has worked with fantasy franchises as well, acting as the composer for The Last Warrior trilogy. Those with keen hearing may also recognize his work from movie trailers like M.N. Shyamalan’s The Visit, 47 Ronin, and the upcoming DCEU film Black Adam.

Telling the Story of First Love

The film’s main theme, appropriately titled “First Love,“ is meant to convey the innocence of falling in love for the first time alongside the happiness a long-term marriage brings. Kallis speaks to the movement of the melody from the piano to the strings as a way to compliment first love and long-term marriage.

[First Love] is introduced softly on the piano to musically encapsulate the sweetness and innocence of what it is to fall in love for the first time. The melody is then passed to the strings which portray a committed statement that mirrors adulthood and both the challenges and happiness of a long-term marriage.

The transition of the melody works to show what everyone has inevitably felt at some point in their life: the simple softness of first love. It’s bright and optimistic, how anyone might initially be at the start of a relationship. As the strings take over, it gives the impression that, while that feeling may be lost at times as the piano is slightly overpowered, it is always an underlying tone, no matter how difficult times may be, setting the viewers (and listeners) up perfectly for what the film delivers.

Related: First Love: Plot, Cast, and Everything Else We Know

Themes of Unconditional Love and Family

The film is set during the 2008 recession when many struggled with job loss and financial security. The synopsis states Jim’s parents “are dealing with the familial fallout of a financial crisis,” meaning they may be among many trying to find a new way to get by. Jim is trying to secure a scholarship to the University of California, Los Angeles, for track, maybe because it is the only way he can afford to attend college. Themes of family, in addition to unconditional love, are present throughout the film and soundtrack.

There are two additional major themes that recapitulate throughout our story, one is the family theme which can be heard on tracks “A Family Tradition” and “Of Course It Is.” Lastly we have of course the love theme, an unconditional love motive which is used to unite our teenage sweethearts. It can be heard on tracks “Love at First Sight” [and] “I Don’t Hate You.”

“A Family Tradition” starts much like the main theme, with a piano and strings. However, it paints a very different picture. Feelings of hope and stability come through, especially because the piece starts and finishes with a similar piano melody. “Of Course It Is” has a different tone than “A Family Tradition.” It feels more haunting and uncertain, like it’s representing a difficult or unexpected situation. The first image that comes to mind when listening to it is a glass falling on the floor in slow motion as everyone watches. The hopeful tone is still lurking, but not in the same nature as the other piece.

First Love isn’t only focusing on the love between Jim and Ann, but between his parents as well. “Love at First Sight” truly encompasses the feeling of seeing someone for the first time and realizing instantly that there is something there. The swell of the strings gives the impression of the realization sinking in, and as they pull back, the hesitancy and shyness of reaching out. “I Don’t Hate You” evokes feelings of forgiveness and strength, like that of reconciliation after a polarizing argument between lovers.

The Magic of Endings

The end credits piece “Happiness” feels like it’s encompassing everything the young lovers and married duo will go through in the film. From how their initial interaction, how they fall for each other, and where their story ends, the piece conveys the magic of first love. It is the perfect way to end the film, from a thematic standpoint, providing a sense of closure but also a hint to where their story may lead.

Kallis developed the soundtrack with two major themes in mind, and they certainly come across. As Common Sense Media said, the score is “poignant,” capturing the journey of first love well. You can stream the soundtrack below.

Travis Barker Rushed To Hospital Due To Medical Emergency, Kourtney Kardashian Accompanies Him While His Daughter Asks For Prayers!