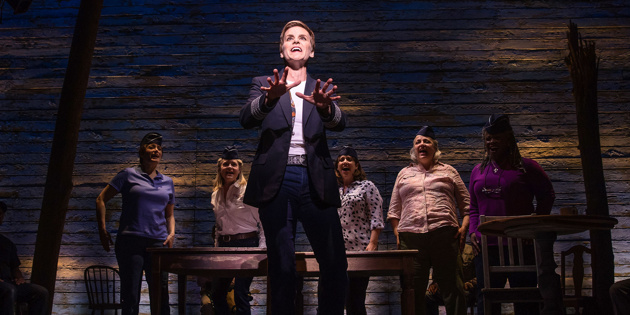 Jenn Colella and the original Broadway cast of “Come From Away”
(Photo: Matthew Murphy)

Welcome to the rock! Members of the Come From Away company will perform a free concert staging of the Broadway musical at the Lincoln Memorial in Washington, D.C. to commemorate the 20th anniversary of 9/11 on September 10 at 6PM ET. The event, produced by Ford’s Theatre Society, features modified staging with minimal props and costumes. The 100-minute performance is offered rain or shine. As previously announced, the Broadway production of Come From Away will resume performances at the Schoenfeld Theatre on September 21. A filmed version of the staged production is set to release on Apple TV+ this fall.

“There isn’t a more fitting or inspiring location than the Lincoln Memorial to stage this wonderful story that honors the better angels of our human nature,” said Ford’s Theatre Director Paul R. Tetreault in a statement. “On the 20th anniversary of 9/11, we are honored to present this story of courage, communion and compassion, and we are grateful for the chance to do so in-person, welcoming back audiences to experience the transportive power of live theater together once again.”

Featuring a book and score by Irene Sankoff and David Hein and directed by Tony winner Christopher Ashley, Come From Away is based on the true story of when the isolated community of Gander, Newfoundland played host to the world. What started as an average day in a small town turned in to an international sleepover when 38 planes, carrying thousands of people from across the globe, were diverted to Gander’s airstrip on September 11, 2001. Undaunted by culture clashes and language barriers, the people of Gander cheered the stranded travelers with music, an open bar, and the recognition that we’re all part of a global family.