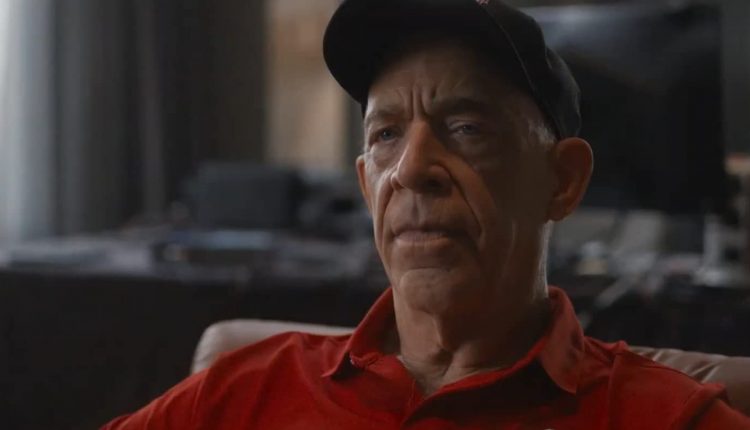 As excitement reaches a fever pitch for the NCAA football title game rematch between Alabama and Georgia, National Champions posits a game-changing scenario that targets the heart of college athletics. The premise has a star quarterback staging a players’ strike within days of the championship game. The film thoughtfully explores the financial exploitation of “student-athletes” by a multi-billion dollar behemoth. National Champions treads preachy and loses tension by meandering into unnecessary melodrama, but makes an overall compelling argument against a skewed system.

Set in New Orleans seventy-two hours before the championship game, Missouri Wolves Heisman-winning quarterback LeMarcus James (Stephan James) vanishes from the team hotel with his best friend, tight end Emmett Sunday (Alexander Ludwig). While head coach James Lazor (J.K. Simmons) basks in the adulation of finally reaching the mountain top, his best player drops a televised bombshell. He’s organizing a players’ strike of the game. LeMarcus demands that “student-athletes” be viewed as “employees” and be compensated as such.

The announcement rocks the country. The college football suits, corporate sponsors, and wealthy team boosters spring into action to stop the insurrection. But they cannot find LeMarcus James. He and Emmet have taken great care to mask their movements as they recruit more players to the cause. Faced with a media debacle, the powers that be unleash a cutthroat lawyer (Uzo Aduba) to force LeMarcus onto the field.

National Champions clearly elucidates the disparities in college football. Players suffer debilitating injuries while generating billions in revenue for their schools. The vast majority will never play professionally, have devoted all of their time to football, and are woefully unprepared for life after the game. The response that free education and opportunities for further success are also explored. The film works when sticking to its guns. The veteran ensemble cast never fails to show the tremendous stakes.

National Champions has a sizable subplot that chips away at the primary focus. Director Ric Roman Waugh (Felon, Angel Has Fallen) and screenwriter Adam Mervis, whose play the film is based on, have good intentions. The coach’s wife (Kristin Chenoweth) has an affair in his most vulnerable moment. It leads to head-scratching twists that feel convoluted. The filmmakers wanted to show another personal drama affected by the strike. This becomes a soap opera element that takes an inordinate amount of runtime.

There has been a major shift in American college athletics since the film’s completion. Players will now be compensated for use of their image. This greatly benefits star athletes in popular sports, but won’t pour money for the no-names. A football quarterback will do a sight better than the golf team captain. That said, the needle has moved forward for student-athletes.

Labor organizing to demand better treatment is a cornerstone of a free society. National Champions shows the players struggle on a level most people take for granted. It’s a sound portrayal of the issue, but not exactly a touchdown delivery. National Champions is a production of Thunder Road Films. It is currently in theaters and available on-demand from STX Films.

The Umbrella Academy season 3 character posters introduce the members of The Sparrow Academy, including Christopher the telekinetic cube.