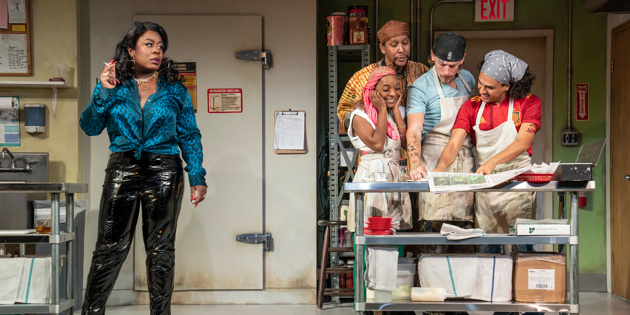 Can’t make it to New York, but want to catch Lynn Nottage’s Clyde’s, starring Uzo Aduba? Second Stage Theater is partnering with Assemble Stream to offer simulcasts of the production for the final two weeks of its run from January 4, 2022 through January 16, allowing viewers the opportunity to witness a live Broadway performance from home. The simulcast will be captured by five to seven cameras and edited live as the performance happens. All cameras will be operated remotely and situated discreetly throughout the Helen Hayes Theater to avoid disrupting the audience in attendance.

“The events of the last 18 months have shown us that there is an appetite for theater in all of its forms, and we are excited to bring a simulcast of our Broadway production of Lynn Nottage’s Clyde’s—in real time—to theater fans,” said Second Stage Executive Director Khady Kamara and Assemble Stream’s Katie McKenna in a joint statement. “Nothing will ever replace the experience of attending a Broadway show, but these simulcasts hope to capture the one-of-a-kind thrill of a live Broadway performance for audience members who are unable to attend the play in person.”

Clyde’s, which officially opens on November 23, centers on the formerly incarcerated kitchen staff of a truck-stop sandwich shop that are offered a shot at reclaiming their lives. Even as the shop’s callous owner tries to keep them under her thumb, the staff members are given purpose and permission to dream by the enigmatic, zen-like chef and his belief in the possibility of the perfect sandwich.