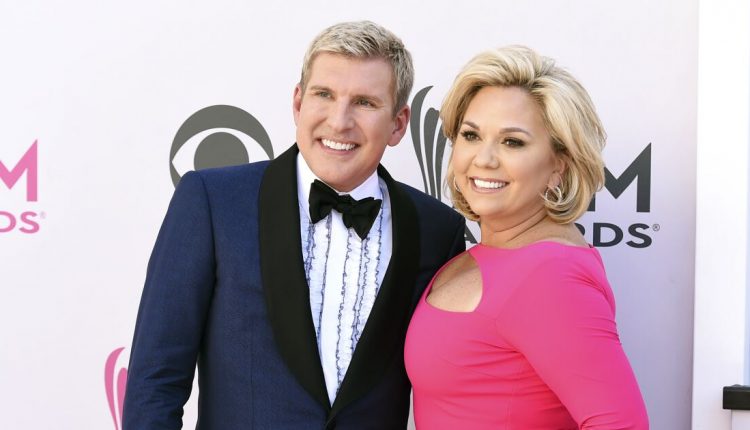 After a federal judge in Georgia sentenced reality TV stars Todd and Julie Chrisley to prison Monday for tax evasion and bank fraud, their children are asking the public to “not judge.”

Kyle Chrisley, son of Todd Chrisley and his ex-wife Teresa Terry, posted Bible verses Tuesday in his Instagram stories. In the passages, from the New Testament book of Matthew, Jesus warns his disciples, “Do not judge, or you too will be judged.”

“For in the same way you judge others, you will be judged, and with the measure you use, it will be measured to you,” the rest of the verses read. “Why do you look at the speck of sawdust in your brother’s eye and pay no attention to the plank in your own eye?”

Minutes after the sentencing Monday, Kyle’s sister, Savannah Chrisley, shared her own cryptic defense on Instagram: a screenshot of a tweet by Pastor Kimberly Jones-Pothier that alludes to the story of Noah and the ark.

“Noah didn’t stop building the ark to explain himself to everyone who doubted and hate on him,” the quote said. “Keep building your ark. The rain will do the talking.”

The couple, who found fame via the hit USA Network show “Chrisley Knows Best,” were both charged in 2019 with conspiracy to commit bank fraud, bank fraud, conspiracy to defraud the United States and tax fraud. Julie Chrisley was also charged with wire fraud and obstruction of justice. They were found guilty of the charges in June.

Kyle Chrisley’s defense came on the heels of estrangement from the family. He was also a star on “Chrisley Knows Best,” but left after the first season to address his addiction to drugs. Todd and Julie Chrisley had custody of his 10-year-old daughter, Chloe.

After the sentencing, Savannah Chrisley revealed in a podcast episode that she now has custody of the child as well as the youngest Chrisley, 16-year-old Grayson. Grayson Chrisley was hospitalized over the weekend for a head injury after he slammed his truck into a line of cars that were stuck in bumper-to-bumper traffic on a Nashville highway, police told The Times.

“I may come home without both my parents,” Savannah Chrisley said in the most recent “Chrisley Knows Best” episode, recorded before the sentencing hearing and released late Monday. “That’s my new normal. I come home Tuesday and I have custody over the 16-year-old and the 10-year-old, and we spend our first Thanksgiving not as a family.”

She went on to ask listeners for “grace” and understanding, and to cease with “negative” and “hateful” comments posted to social media.

Prosecutors alleged that the Chrisleys submitted fake documents to banks when applying for loans to fund their expensive lifestyle. They said Julie Chrisley also submitted a false credit report and fake bank statements when trying to rent a house in California and that the couple then refused to pay rent a few months after they started using the home.

Together with their accountant Peter Tarantino, who was also sentenced Monday for his role in the situation, the couple schemed to defraud the Internal Revenue Service to avoid paying taxes, prosecutors said. The Chrisleys failed to file tax returns or pay any taxes from 2013 to 2016, even as their wealth amassed while they starred in their reality TV show, which debuted in 2014.

“As this sentencing proves, when you lie, cheat, and steal, justice is blind to your fame, fortune, and position,” said Keri Farley, Special Agent in Charge of FBI Atlanta, in a statement after Monday’s sentencing.

Some users on social media reacted to the sentencing by drawing comparisons to former President Trump, whose company faces tax fraud allegations in a New York trial.

After years of hiding his tax records, the U.S. Supreme Court on Tuesday denied President Trump’s plea to shield his tax returns from being turned over to Congress, which seeks to provide oversight of his financial dealings.

“Chrisley Knows Best” was originally set in Georgia, where Todd Chrisley built his fortune through real estate development, before moving to Nashville during the show’s fourth season. After nine seasons, USA Network cut the show but still had plans to air episodes of its 10th season, which were shot before the trial, next year, Deadline reported.

Both TV networks are under NBCUniversal, which has yet to officially comment on the fate of the Chrisley family’s shows.

Multicultural Embrace in an Exotic Environment

‘Star Wars’ was always political. ‘Andor’ made it must-see TV

These are the 101 best restaurants in Los Angeles