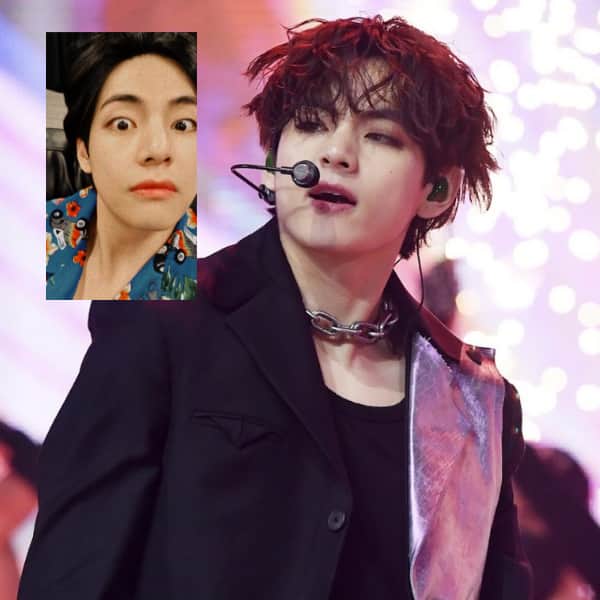 We are in December ARMY! It’s the month of two of BTS members’ birthdays. Two of the Kim brothers – Jin (Kim Seokjin) and V (Kim Taehyung) celebrate their birthday this month. While Jin celebrates his birthday on 4th December, V celebrates his birthday on 30th December. And ahead of his birthday, TaeTae has given a selfie surprise to the ARMY. Yes, you read that right. The Permission To Dance crooner took to BTS’ official Twitter handle and shared a selca (read selfie). He has a goofy expression on his face. His eyes are wide open and he is seen wearing a blue printed shirt. BTS V seems to be shooting for something interesting or maybe he is out enjoying the weather in LA like his fellow BTS member, J-Hope. Anyway, check out V aka Kim Taehyung’s latest selfie post here: Also Read – BTS LA Concert: Jin adds X-factor to day one and two of the Permission To Dance on Stage concert with his creativity and cuteness — watch ‘aww’-some videos

ARMY is super happy with Taehyung’s post. Usually, Taehyung shies away from posting selfies as he feels he doesn’t look good. Someone needs to tell the Most Handsome Man that that’s not true. Talking about ARMY’s happiness, well, Taetae bear’s admirers cannot contain their excitement for his birthday on 30th December. We are sure they would have some amazing plans in place for the My Universe singer’s birthday. Last year Taehyung’s Chinese fans had displayed a video birthday wish on Burj Khalifa. Let’s see what plans they have this year. Anyway, have a dekko at their excitement on seeing BTS V’s selfie here: Also Read – BTS LA PTD Concert: ARMY thirsting over Jungkook’s shirtless backstage video, Bam getting LOVE and more – Golden Maknae’s priceless moments from SoFi

it’s the way no one in irl except 2-3 bothered to wish and ignored me as well and then there’s you, who posted a selca on my birthday 🙁 i don’t deserve you

You’ve a mole on your lips, means maybe I kissed you there in past life. Now let’s make it happen in present life pic.twitter.com/f6nH35GNMy

im so happy to see you taehyung fr, today is an important day to me and i just can’t believe you came home! this is the best way to start your beautiful month tbh ?
i really hope you’re enjoying EVERYTHING, as you deserve babe! ? good luck for last two shows!
i love you SO much

This genre of Taehyung’s selca ? pic.twitter.com/nBys3HGIlP

V’s moles seem to have caught ARMY’s attention. A lot of ARMY shared the zoomed-in pictures of the same. While the rest are expressing happiness that he shared a selfie, and surprised them all. Also Read – BTS: Jin makes his own little ‘Superman squad’ at Six Flags amusement park; gets Funnel ice-cream treat from the manager – view pics

Meanwhile, BTS is gearing up for the second LA concert which is tonight (tomorrow morning (2nd December) due to the time difference) and tomorrow 2nd December (Friday morning, 3rd December). After the concert, BTS – RM, Jin, Suga, J-Hope, Jimin, Taehyung and Jungkook – will be flying back to South Korea. They have the MAMAs to attend and yet another jam-packed schedule, we bet.

How to get tickets for Adele’s Las Vegas concert residency