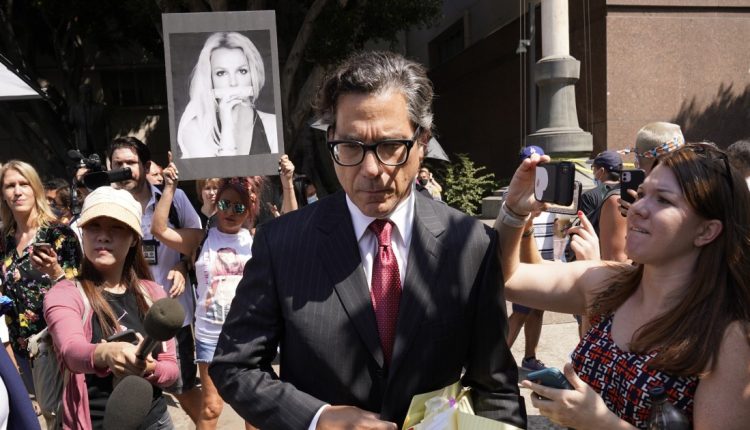 Britney Spears’ new attorney is getting down to business — the business of having Jamie Spears removed from his position of authority over his pop star daughter.

“My firm and I are moving aggressively and expeditiously to file a petition to remove Jamie Spears unless he resigns first,” Mathew Rosengart said Monday afternoon outside L.A.’s Stanley Mosk Courthouse, as seen in video posted on social media.

Note the slight difference between what he said and what Spears has asked for in recent weeks: The dissolution of her conservatorship entirely, without a review of her mental health.

Spears has said she’s afraid of her father, who has been paid to handle her money since 2008. Up until 2019, he was also in charge of his daughter’s personal decisions.

Rosengart was approved as Spears’ personal attorney in a hearing Wednesday. He and his firm, Greenberg Traurig LLP, replaced court-appointed attorney Samuel Ingham III and the firm Loeb & Loeb, both of whom had recently tendered their resignations pending assignment of new representation.

Ingham had represented the singer since the start of her conservatorship in 2008; Spears complained June 23 that she never knew she could petition to end the conservatorship at any time.

Last week, the 39-year-old mother of two got more specific about her wishes, saying in court, “I would like to charge my father with conservatorship abuse.”

Describing being denied things as basic as coffee, “hair vitamins” and her driver’s license, she said, “If this is not abuse, I don’t know what is.”

In turn, Vivian Thoreen, attorney for Jamie Spears, told the court that Britney Spears had many inaccurate beliefs, among them that “her father is responsible for all the bad things that have happened to her.”

“Whether it’s misinformation, lack of correction, or being wrongly advised, I don’t know,” Thoreen said, noting that since 2019 Jamie had been in charge only of his daughter’s estate, not her person.

Monday’s hearing was set, ostensibly, to hash out details about who would or would not pay for a 24/7 security detail for Jodi Montgomery, currently the conservator of Spears’ person. Montgomery said in a July 8 court filing that she had to hire security starting June 30 after receiving an increased number of threats in posts online and directed at her via phone calls, text messages and emails.

Spears’ estate had been paying for Montgomery’s $50,000-a-month security detail on a conditional basis; Jamie Spears’ team was arguing that the estate could not afford to pay security costs for every person involved in the conservatorship who fielded threats.

Outside court Monday, Rosengart thanked the pop star for her “courage and her strength” and gave a nod to Judge Brenda Penny for her courtesy as he and his firm joined the case.

“I also want to thank Britney Spears’ fans and supporters,” he added. “The outreach and support for my firm, myself, and most importantly, Britney, has truly been overwhelming.”

The next hearing in the case is scheduled for Monday.

The Associated Press contributed to this report.