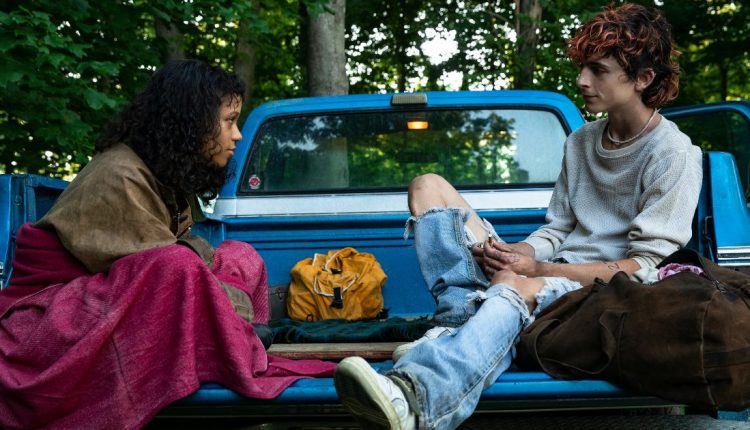 “Can the leopard change its spots?” That’s the question that filmmaker Luca Guadagnino has been posing in various interviews for his new film Bones and All. Starring his Call Me By Your Name collaborator Timothée Chalamet and Waves actress Taylor Russell, the film chronicles the road trip of two impoverished cannibals across rural America in the 1980s, and is much bleaker and more violent than almost anything Guadagnino has done.

So can the leopard change its spots? That’s the kind of existential question that may arise when discussing the film (or anything, really) with Guadagnino, who is a warmly encouraging, intelligent, and thoughtful director. His movies could be appreciated without thinking too much about them (they’re aesthetically sumptuous and enchanting, after all), but are also an invitation to contemplation and self-reflection. As such, Guadagnino spoke with MovieWeb about Bones and All, its inspiration, and its stars.

Bones and All Has Guadagnino Questioning Our Spots

Bones and All follows Maren (played with heartbreaking vulnerability by Taylor Russell), a young woman who has been essentially abandoned by her family due to cannibalistic impulses she simply can’t control. In her voyage of survival and self-discovery, she encounters others like her, eventually teaming up with the equally disenfranchised Lee (played by Chalamet in perhaps his best performance to date). Along the way, Russell is subtly evocative and truly brilliant as Maren learns more about her nature or, to put in Guadagnino’s terms, the spots of her disposition.

“We can start with this image from E.M. Forster’s Maurice,” began Guadagnino, “where someone says about their own condition, ‘Can the leopard change its spots?’ Which is something I think about a lot still. In that great, great novel, you see a scene where Maurice is relentless, and he can’t stay in a place for a long time, he needs to leave. So he’s going from the countryside to London where he has to go to a therapist. During the travel, the carriage goes through a hill and into the middle of a bush, and the way that Forster described that, is that Maurice is appalled by the indifference of nature.” Guadagnino continued:

That makes me think a lot about this movie I made. These characters, they can’t change their spots. Under circumstances that are irrelevant for us to know why, that’s how they’ve been born. And they are driven by the indifference of their nature, that makes them do things that their morals, their emotional baggage, their individual sense of selves, feels not willing to do, and yet they have to do it. The friction between these two things is what really very much interested me. If you try to dominate your nature and not succeed, what is the bargain? How do you make a trade there in order to survive? Lee and Maren are trying to make a bargain with their nature by finding love. Can love survive in these circumstances?

Luca Guadagnino Loves His Characters, Bones and All

Lee and Maren are undoubtedly tragic characters. Watching their plight transpire across the film as they hopscotch across a desolate American wasteland of Reaganomics is like catching a lone, fiery meteor light up the star-speckled sky for a brief moment — they make for a pretty shooting star, but they’re bound not to last. There’s a gorgeous doom to them, two people who get to be alone together for an ephemeral moment, and the loneliness, insecurity, and rejection Lee and Maren feel are compassionately realized by Guadagnino, who speaks about their sorrow as if he was the family they never knew.

“I think that these characters, if there is something that is ostracizing them, it’s the familial bond,” said Guadagnino. “She’s abandoned by the father, she’s been abandoned by the mother. She is pursuing to meet the mother again, but when she does so, she realizes that it’s not what she expected it to be. They are chased after by their peers, who are in the position of being older, so they play the father figure, and yet are trying to dominate them. At the same time, they are chased after by their own rejection of themselves.”

Queer Theory and Bones and All

Perhaps this is the real reason that queer film theory has been particularly enthralled by Guadagnino’s morbidly beautiful Bones and All, based on the book from Camille DeAngelis — that sense of ostracism, of lacking filial or social validation, of being chased. Guadagnino is a queer icon in many respects, but he doesn’t dictate interpretations, refusing any cinematic fascism; rather, he loves his characters and hopes others will too, seeing in them whatever they need to.

“I respect every reading of my movie, and I don’t want to narrow anyone’s thoughts about it,” said Guadagnino. “I like the idea that these people are really being ostracized mostly by forces that are to do with familial bonds and their own nature, less by society, because in a way, they are not even interested in being included. In a way, Maren has been growing up used to not belonging.” A perspective of powerlessness, whether to one’s own nature or to social mores, could easily become a queer reading of Bones and All, but Guadagnino is quick to elaborate.

“Also, queer, we need to discuss that, right?” asked Guadagnino, clarifying something crucial. “Like, are we talking about queer from the lens of — what? I do believe that in a way, queerness is an approach to life that doesn’t go for the center of things. Queer in a way, for me, is the ultimate refusal to look for power and to want power. I don’t think the dynamic should be between the powerful and the powerless and for the powerless to take power from the powerful and that provides the powerful. There are dynamics that do not need to be about power, and I think the real queerness comes from that, completely disavowing or completely rejecting the idea of power.”

It’s genuinely exciting to see Guadagnino get excited (even over theoretical issues), like witnessing a swirling mess of knowledge and poetry crystallize into something gemlike, and one of the most exciting things for the filmmaker in recent years has been working with Chalamet. While the actor certainly had some remarkable performances before his time with Guadagnino, it was their film Call Me By Your Name which really launched Chalamet into the stratospheres of stardom, while also bringing a new, fawning audience to Guadagnino’s work.

“I guess it’s maybe been the same thing Francois Truffaut felt when he found Jean-Pierre Léaud,” remarked Guadagnino, discussing his working collaborations with Chalamet in relation to Truffaut’s Antoine Doinel films with Léaud. The two made five films over 20 years which followed the same character, an idea that Guadagnino has considered with Chalamet’s character from Call Me By Your Name.

“I’m very excited by Timothée,” continued Guadagnino. “I am very heightened by him, by his curiosity, by his maturity, by his growing up. But also by the way in which he floats in this incredible world he’s living in, with the incredible popularity he’s getting, but with a beautiful sense of responsibility for it. At the same time, he’s using it as a tool to challenge himself, to dare more. He’s wonderful, he truly touches me. Timothée is very generous. Actors are not usually very generous. He’s very, very generous.”

Guadagnino is generous as well, not only with his time, but with his vision. He’s shared it with several masterpieces, such as I Am Love and his vastly underrated remake of Suspiria, and thankfully, he’s sharing it with the remarkable new film Bones and All from Metro Goldwyn Mayer Pictures. Produced by Frenesy Film Company, Per Capita Productions, The Apartment Pictures, Memo Films, 3 Marys Entertainment, Elafilm, and Tenderstories, Bones and All premiered in New York and Los Angeles on November 18, and everywhere else on November 23.